UFO and the ethernal fight between believers and non believers

This article belongs to UFO theme.

Hi everyone, this is my first article on the magazine and I hope that you think my writing is up to the task. Now, moving forward to more interesting stuff than me I'm here to talk to you a little about my own experience with UFO's.
But before you hit "back" thinking that this is another story about abduction, an extraterrestrial politically incorrect visit to my bedroom at night, or the usual area 51 blurred picture, crazy talking anecdote, I'm far far away from it.

This is more like a chronic about a "merchandising" development I've witnessed about a few years ago when I was on my teenage years. I was on the "writers lounge" of the magazine checking the new topics for the coming weeks and one got me thinking. 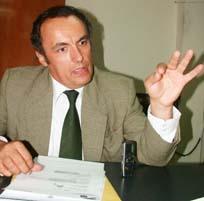 Ecuadorian Ufologist
You know how this "Sex Sells" deal have been wandering around for years on the advertising offices, and has become one of the hardest rounds between men and women after the Sunday football or who gets the remote. So if you got around here, you must be wondering what does all this nonsense have to do with UFO's and I'll break it down to you on the next lines.


"
if I would've been my mom I would smack myself on the head for asking her to leave the house at night to take blurry pictures with a crappy camera.
It's not unknown for the UFO community that South America is a great place for watching flying saucers, and of course local TV networks try to exploit the last penny of it, relying their lack of imagination on the easy impressionable mind of our countries. And on this context a UFOLOGIST (if that word even exists) appeared on our prime time Saturday night screen on channel 2. There was this funny talking guy with really big glasses (bottle bottom style) who claimed that he went to UFO college somewhere around the world, and that he has been chasing and studying extraterrestrials since ET came to earth. Of course he showed videos (of course cristal clear and HD) of machines doing pretty unbelievable things on our skies. And drunk pilots with huge beards talking about how they had been abducted or have seen strange things going around them while they where working over some crop field somewhere over Mexico or Bolivia.

Of course after a few weeks the show went huge, people all over the country (including me) watched it every Saturday with the appropriate bowl of pop corn and a glass of coke. It got so much rating that about a month or so after it went on the air for the first time people started to have experiences of their own. Kids at school claimed to see lights over their houses and there were cameras pointing up to the sky on every building. Of course with the pollution and the city lights watching the stars is a piece of cake... but even so, we were being approached by aliens and we were proud of it.


"
this is another story about abduction, an extraterrestrial politically incorrect visit to my bedroom
After wandering the streets in mass histeria like rambling lunatics, the funny talking guy changed his father's suits and got some of his own. Lose the red tie that he worn week after week and deceived all the ladies when he got a laser surgery and thrown his bottle bottom glasses away on the garbage can.

It was a success, maybe all what his parents wanted when they paid Clown College, sorry UFO College, the TV station was making money like crazy and even green little buddies appeared on every ad that aired on those 45 minutes or so, week after week.

I even remember one night going out to the street with my mom because some of our neighbours started to spread the rumour that some lights where flying over our neighbourhood. As a good fan of the show I took my (still with film) camera and a pair of toy binoculars. After a few minutes of course I felt tottally ripped off for the guy of the store where my dad bought the camera and the glasses because I couldn't see a thing but the man on the TV said they where there... so I had to see them. 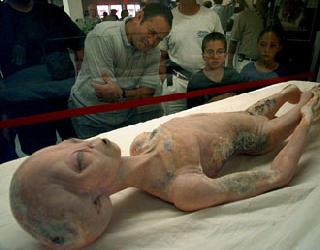 Roswell
Now that I remember my pals and me trying to imagine flying objects with every light we saw at the sky (and of course no one moved) it feels pretty dumb and if I would've been my mom I would smack myself on the head for asking her to leave the house at night to take blurry pictures with a crappy camera.

Few weeks later, maybe because the ufologist lost his appeal with older, lonelier women after throwing his glasses away the show lost it's spin and went from Saturday night to Sunday afternoon, and after that to die on some UHF public access channel.

"
we'll keep looking at the skies... just like Mr. Spock said on that Simpsons chapter.
But for about two months it caused mass hysteria, thrown people out to the street to watch the smokey sky of my healthy city and of course gave advertising people new ideas to use green little charaters in a whole new way. To sell things from hamburguers to women underwear.

So I now know for a fact that UFO's sell, people love rambling stories about abductions and we'll keep looking at the skies... just like Mr. Spock said on that Simpsons chapter.

And this is a lliving proof that not only good looking women with tiny bikinis can sell stuff, so there's hope for normal people like the rest of us.