SEARCHING FOR SOME LAUGHS!

In 1979, a handful of L.A. standup comics, who I still refer to as the Fabulous Fourteen, tried to blackmail a comedy club owner into paying cash for their services. It was a quasi labor dispute argued by huge egos on both sides. Im Dying up Here! is a story about comics dreams realized, and some of those more firmly clutched dreams, frustrated.
By Lue Deck
2009-08-31

This article belongs to In Search of Laughs! column.

In 1979, a handful of L.A. standup comics, who I still refer to as the Fabulous Fourteen, tried to blackmail a comedy club owner into paying cash for their services. It was a quasi labor dispute argued by huge egos on both sides. "I'm Dying up Here!" is a story about comics' dreams realized, and some of those more firmly clutched dreams, frustrated.

It's my opinion that one of the Fabulous Fourteen, with whom I played on that same club's celebrity basketball team, is responsible in part, for that neurotic comic's sad and violent death. It's simply my opinion, but I was there!

Read this incredible book to form your own opinion. 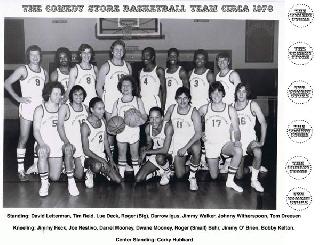 The unpredictable and roiling surf of publicity for " I'm Dying up Here!" has washed me out of retirement. Today, I choose to stand with The Comedy Store, as I always have. I always will! The author has interviewed me, and mentions me in his book several times. Respecting the art of full disclosure, I admit that I like Bill Knodelseder, and that I admire Bill Knodelseder! Bill The K sent me a thank you note for attending his book-signing event with my beautiful internet radio producer. This is my reply to him:

I had an unbelievable blast at the Book Soup signing event. Who expected that kinda crowd and that many sales? Besides you, turns out I knew six people there.

Of all comics to be there, I had, in my caveman days, wanted to sleep w/ Susan Sweezter and Rachel, and now they probably both out - earn me! C'EST La Vie! Brad Sanders and I had a talk that HAD waited 30 years. Same result as last time. I support The Comedy Store, and he doesn't! But I still like him. No grudges felt here. Argus Hamilton barely recognized me, and was shocked I was following him later, in the Original Room of The Comedy Store.

Also at Book Soup, standing in the back, by the register, was the owner of L.A.'s very popular Laff Factory, Jaime. He was very cordial, and invited me to call in for spots.

Bill, in your talk, promoting your book, you got nine good laughsNice shootin', Tex!

When I get my swing back, maybe you'll go to a show with me. Bill, I'd love to make you laugh. Since you are the most informed (about standup) media-ist I know, and one of the smartest guys I know, and I'm still hoping to get some coaching on my writing from you, here's some of that weirdo back-story to our shared Tuesday night:

Two days before, I showed up 2 hours early for Amateur Night Sunday at The Comedy Store. I used an unknown part of my name, and after 2 1/2 hours, failed to get a spot. The next day, I called in my availabilities to Tommy, Mitzi's comic coordinator. (Mitzi Shore, Pauly's mom, is the sole owner and operator of The Comedy Store on Sunset Blvd.) He growled at me: " We don't use veteran comics here, we grow our own!" Not expressing much hope, Tommy said he would talk to Mitzi, but that I shouldn't be hopeful. I waited. Usually, the comics call in after 10 am Tuesday to see if they got any spots. I waited. Surprisingly, Tommy himself called me back around 11 PM Monday night saying that when he told Mitzi about my request for stage time, she gave a loud: "Oh, My Godddd!" (Insert your best Mitzi voice here!) Good Lord in Heaven, she still remembers Lue!

My appearance following Argus was the result. It was Mitzi's way of welcoming me back, and making me feel comfortable to let the venerable Argie bring me on stage. Tommy said to park in our lot and take Mitzi's spot. This is a rare honor for an old MC and doorman. A nice kid named Matt stopped me at the parking lot entrance, and said: "Are you Mr. Deck?" Another nice kid named Adam at the cover booth said: "You must be Lue! Come on in! You're on at 9:30." The effervescent piano player named Steve smiled and said, "Welcome back to The Original!" This was an amazing greeting from strangers who were doing the exact same job I had twenty years ago. Obviously, my way had been prepared! God Bless you: Mitzi! Thanks, Tommy!


"
Friday, I got an email from my online editor asking me if Id like to start submitting some stories again. The Laff Factorys comic coordinator, a lovely Cecily said shed call back with gigs next week or so. And I had sex twice this week!
As I told you for your book, Argus Hamilton was my big brother at The Comedy Store in the 70's and 80's. As paid regulars, with assigned set times, we showed up ready to do our jobs after your book signing. It was very early, his opener sucked, and he didn't stay because he leaves right after his set, according to his habits. But even after thirty years, Argus made me laugh three or four times. And, for a crowd of about forty thirty-somethings, I did pretty well, Thank God!

On Wednesday, the owner of The Laff Factory, Jaime Mizeada left me a message with very warm instructions. On Thursday, The Laff Factory took my avails. Friday, I got an email from my online editor asking me if I'd like to start submitting some stories again. The Laff Factory's comic coordinator, a lovely Cecily said she'd call back with gigs next week or so. And I had sex twice this week! Will the miracles ever stop?

Somehow I knew there would be waves about "I'm dying up here!" and I definitely planned to surf them!

It seems Ron Will (the part of my real name I used for Amateur Night) has NO standing in L.A. standup, but evidently, the real Lue Deck does. I knew this vital fact in my heart of hearts. But, since I'd gotten hurt, I was afraid to do anything about it. At first, it was such an honor when you interviewed me. Later, it was a smokin' reminder to me about what I've accomplished in standup, and who I really was inside, and what I'd done lately, that I began to think you gave me an Intellectual hot foot! Well, thank you Bill! I'm certainly hopping around a lot now.

Your book has helped the way I feel about the strike, my act, my career, and my life.
You sly writer guys are tricky! Bill, you made me remember, feel, and think, and get off my butt! Wow, Buddy, Thanks!

For the record, evidently I was home grown at The Comedy Store, but if I hadn't met and talked to you so much, I would not have gone back!

It was you, not your book!

Call me anytime!
Your pal in Red Shoes:
Lue (recently out of retirement)

To me, a new kid, the whole strike thing was stupid! At college, I found out what a labor union is, and how you form one. That mob-rule-shouting club wasn't a labor movement. It still isn't, and it never will be! Comics need to learn to negotiate for themselves, or get an agent who can! If you are really a big shot in standup, then damn it - Stand tall! You should act like one!

Looking back to that crazy mix-up, I know all of the Fabulous Fourteen actually deserved to be paid for doing their acts at The Comedy Store. They were the funniest people in the world! Another twenty or so lesser names deserved it too! I'm convinced their mistake was in calling on the whole Los Angeles comic population to sacrifice themselves for individuals who were actually making it already. Drawing in loads of undeserving and not-ready-yet acts into a miscalculated and pseudo-labor Ponzi scheme certainly doomed those legitimate grievances. But then, the decade of disco was looming on us all, and the insecure ones amongst us, just panicked!

If you ever see me doing a show, ask me afterwards about the time during the strike when many of my pals and fellow acts were trying to get me to do a honorary and ceremonial circuit around the picket line holding one of their signs. I had just taken a smoke break in front of The Main Room, following a whole hour onstage with Mitzi's new idea: group comedy! (You see, around the Store, we never, ever use the term: Improvisation. Never! Ever!) As I surveyed a group of mostly my peers, a friendly face saw a chance to be both political and funny at the same time. Thom Sharp, from Detroit, hoped to convert to the striker's side, the youngest and least seasoned act of the entire doorman staff: "Mitzi's boys!" And I will love him until the day I die for what he did. Thom Sharp started to, and got most of the picketers to start chanting their new labor slogan: Free Lue Deck! Free Lue Deck! Free Lue Deck! Sure, I walked the picket line for almost two complete loops! Hey, I'm Polish! Just to show some solidarity! Mitzi caught me, and then I ran inside to do my late Belly Room set, like a freshman! But I still remember, and I loved it!

It is my heartfelt recommendation that comedy fans should read "I'm dying up here!"

But, don't mind me, I'm just searching for some laughs in L.A.!
See you all at The Comedy Store! I'll be the one in Red Shoes!
And I'm NOT dying up here!