Today I found out Im gay

That's what happens if you read women's magazines and have couple of drinks at the same time. That's when we all start to make science. In this issue of the magazine called Trend, our female companions (no, no girlfriends, no sex buddies, just friends to clear it up, duh) found a test  How To Find Out Your Boyfriend Is Gay or something similar. At least that's how the story goes  it was a test to find out how gay a guy is.

There were 13 different questions that they asked us. I don't remember all the questions, but just to give you some sort of idea what it was all about:

What kind of underwear to you wear? Do they shape your ass well? Do you sometimes wear strings? Name 5 clothes designers They smelled me to find out if I use some sort of perfume Have I called anyone "honey" or "dear"? How does my hair look? Is it well-shaped? Would you ever work as a steward, bartender, interior designer, hair dresser or such? Have you ever discussed the shape of your boobies with anyone? Do you watch Sex and the City? Have you ever done a full volt? Do you wear close-fitting shirts? ....blah The rest of the questions were all alike. By the end of the day I was pretty straight gay. I scored 11 out of 13 possible points. A friend of mine, definitely a lot more gay than I, scored only 10. But one way or another, lets face it, it doesn't matter from which side we look at it  front, back or the contents of my wet fantasies, it turned out that my friend and I both contain a whole lot of 'gay.' For me, it explains EVERYTHING. The fact why I don't have a girlfriend (I should have been looking for a boyfriend instead, duh), the fact why my nipples are so long, or, actually, why I stretched them so long. Right now they're about 13 feet...don't ask. 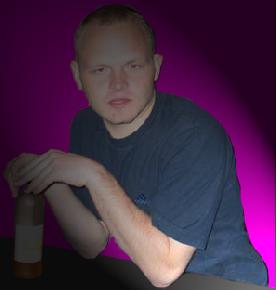 To tell you the truth this piece of writing is starting to remind me a column I used to write  "My Farked Up Life".

In other words: something wannabe-humorous, but basically pretty much nonsense, without a point and far from anything real. Well, that's the way I like it actually. As for the gay test  then actually everything I told you about it, is true. Unfortunately, I can't remember all the questions that were in there. Good memory and loads of booze don't always fit together too well. As for my long-long nipples, I'll leave it up to you. As Ripley says: "Believe it or not."

One last thing: I'd like to ask if you know of any really good gay tests around there? I'd be glad to take one, just to double-check before I dive into the action. I know the tests are 100% true, but still, I think it's better to be careful than to regret it later. Respect to the magazines with gay tests! How else would I find out I'm gay? God save the Siim and if you're reading it, you too.

But still - How gay are You?