Some people are afraid of flying.

Me? I'm terrified of landing. Because that's when the flight attendant makes the announcement that people are free to use their cell phones. If I hear one more person give an excruciatingly detailed description of their exit from the plane, I'm afraid I'm going to strangle someone.

Let's see if we can put this in perspective ... a step-by-step description of someone's movements is usually reserved for the Pope or heads of state.

And it's usually a newscaster speaking.

And it's usually when that famous person is dead ... "The Pope's casket is making the turn on to the Via Roma now, Dan. There are thousands of faithful Catholics watching as the honor guard makes its way to the Vatican ... "

So, unless they're wheeling you off the plane, nobody really needs a step-by-step account of your exit. And that includes your grandmother, your roommate or your mail-order bride.

Most major airports now funnel everyone through one exit. Have you had major plastic surgery since the last time you saw the person picking you up? No? Then you can probably keep that cell phone holstered, Tex, and still find your ride without much difficulty. 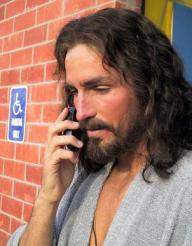 I think we should allow phone companies to start charging double-minutes for inane conversations ...

Forget the legislation about talking on a cell phone in the car, let's pass some laws that allow vigilante justice against some of the more common cell phone pinheads:

Loud, Obnoxious Deal Guy - The cell phone isn't the only tiny thing this guy has. But he makes up for it by letting everyone know that he's working on this huge deal that's going to finally put him in the big time. Just once, I want to be there when the guy on the other end of the line tells LOD Guy that they decided to go with Bob at that other company because at least Bob knows how to keep his negotiations private.

Tarantino Audition Guy - Hey, we're all impressed with your ability to use the F-word as a noun, verb, adjective, adverb and in the pluperfect subjunctive tense. It's just that, occasionally, I like to spend time out in public with my 7-year old. If I want him to hear that kind of language, I'll take him to see Reservoir Dogs myself.

It's All About Me Girl - We can only hope that there is a special level of hell reserved for people who make loud, outgoing phone calls in the middle of movies, comedy shows and funerals. (Yes, I've witnessed all three.) I know you think that Paris Hilton is cool and edgy, but no one else with a brain does. Plus, you don't have her money so you have even less reason to be as obnoxious as she is.

Finally, unless there's a bomb in the stall, there is absolutely no reason to take a phone call in a public restroom.

Please let everyone know that from here on out, if you fall into any of the above categories, it will be considered legal to douse you and your cell phone with gasoline and light both on fire.