As he put his red van in park and turned off the engine, Willy realized that someone had just rented his body...again! Damn, he always felt so cheap afterwards. He had accepted all the loony baggage that came with it when he finally signed the trust papers, but even after dozens of rentals, the aftershock effects still left him feeling whorish and white trashy. But, in the next moment, Willy was curious about how it had gone for his customer. Did the political jokes work? Were there hecklers?
By Lue Deck
2014-01-05
(Shut up, Monkey Brain!)

As he put his red van in park and turned off the engine, Willy realized that someone had just rented his body...again! Damn, he always felt so cheap afterwards. He had accepted all the loony baggage that came with it when he finally signed the trust papers, but even after dozens of rentals, the aftershock effects still left him feeling whorish and white trashy. But, in the next moment, Willy was curious about how it had gone for his customer. Did the political jokes work? Were there hecklers?

Willy struggled to find his cane. Such was life in Hobbleland. Willy flashed on his father, a real old school engineer type. He could still hear Dad urging him: "Life is tough! Get used to it! Rub some dirt on it! Now, walk it off!" Willy smiled and thought for the millionth time: "Good advice!" Monkey brain says: "...no matter how annoying it happened to be...every time!" He dragged himself out and smiled at the Aerostar again.

Ole Red had carried him safely from Savannah to Spokane, from Toledo to Tijuana, from the UP to the OC! Such was life for a working stand up comic. Hundreds of cities, thousands of shows, this old hoss never failed him on the comedy trail. Willy mused about all the jokes he'd written while driving Red to his next gig. "Yeah, those Texas jokes!" Again, he tried to judge how his jokes and act had played for the rentee. He turned and worked his way up painfully to his second floor loft.

ComedyFox.com had put up an old video of Willy's act in Louisville, Kentucky doing a killer set for The Nashville Network. Three things happened: 1) He got a great tape and a good paycheck 2) When it aired, his 5th cousins came out of the woodwork to borrow money (Really, I mean it, three big hairy "Deliverance" guys CAME OUT of the woodwork!) And 3) The CEO of RENT MY BODY emailed an offer of cash pay for play. Willy had never heard of digital memory replay. Evidently, some gadget guy in Silicon Valley figured out how to let people rent other people's best moments in life, and relive them, if properly digitally connected. Willy didn't really understand the process. Hey, he didn't even have a cell phone anymore. He didn't feel important enough. So, he had signed up! Anyhow, it paid most of the bills.

On the long way up an old, winding staircase, Willy was glad he'd had the van-wakeup clause inserted in his rental agreement. It was the tip-off that someone had rented his act. RENT MY BODY! What a concept! Wonder what Asimov would think about that. Willy again smiled, contemplating if his customer had a good time. He wondered if the nuclear proliferation joke worked. Boy, that particular joke needed a lot of sarcasm! Think Keith Olbermann on steroids.

Reaching the last three steps before his door, Willy groaned like a wounded wookie as he heard the loud snap that signaled his left knee was going on vacation, right now! It also meant he was going to fall...again. Damn it, he really hated getting old. Willy never saw the bleeping metal hand railing his forehead bounced off, but later he remembered what went through his mind. It was "...hope my cop jokes worked!"

When he came to, Willy's headache was the size of Memphis! Not the Memphis in Egypt, the one in Tennessee. (Some get confused.) He had been reliving a killer show in Louisville three years ago, before the car wreck. Onstage, stuff was going great. Folks liked his local references. Oh boy, there was a heckler! Willy liked hecklers because they were like a good steak dinner to him. If Willy made a heckler the butt of his show, the guy learned quick enough to shut up. (Hey Skippy, do I come down to Burger King, and bleep up your job?) Then, he turned stage left and saw his reflection in a bar mirror. He had red hair! And he was a woman! Wow, a woman had rented his act! "Oww!"

Willy's head felt like two reality stars banging skulls, arguing over more camera time. Why was he a girl in his dream? Because he had watched the video of that particular set so many times, Willy remembered seeing himself in the onstage mirror. And he was sure he wasn't a damn girl, now or then. "Owww!" His knees hurt as much as his poor punkin' head. It jumped through his short-circuited mind: could the red head be the one who just leased his act? His deal wasn't supposed to work like that, but what else could it be? Damn, she was good! Did she do the Viagra jokes?

Fumbling for keys and staggering through his front door. "Owww!" Willy knew he wouldn't have made it through the wreck surgeries without the dough from the rentals. But he hadn't expected all this. " What's happening to me?" This wasn't the first time Willy had felt this way. Since he'd grown so much as a teenager, four inches when he was fourteen, four inches when he was fifteen, Willy had been hitting his head on low-hanging stuff. Once, he stood up into a ceiling fan.
"
He'd had so many skull injuries there was a dent in his head. He called it brain slosh when he couldn't remember. Like who he was, what he'd done, where he'd been.
"I did what in a show, where, in 2003?" Maybe that's why the digital memory thingy worked so well for him. Willy had felt the panic of not knowing where you are, or who you are for the first hour you're awake, more than he wanted to admit to himself, or anyone.

Willy checked his messages, mail, and email. Might as well have checked for bleeping messenger pigeons. Nothing. 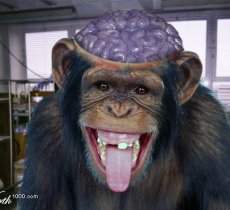 Monkey brain says: "Do something!" Shut up! Willy hated not performing. As a stand up comic, Willy never met a gig he didn't like! Once any club or booking agent liked him, and/or his act, Willy would not say no to a show. To Willy, his stand up act was the natural confluence of words and fun! To him, the only thing that mattered was getting his crowd laughing. That's how he measured his self-esteem for thirty years. He loved making up jokes when seeing new places, or meeting new folks. That's who he was. Any showroom, any stage! Willie hated giving that up! The holes it left in him felt like gunshots. After his body wore out, well, it was like an itch that couldn't be scratched, or a tickle in your damn throat that couldn't be coughed away, or a big gas bubble that was bound to embarrass you, or a..."Shut up, Monkey brain!" He slumped onto his favorite couch.

Willy was annoyed with himself. If he lets it get going, his damn monkey brain chatters at him nonstop. Here was a chance to avoid his good old buddy, or get down and party with Mr.Trouble. Sometimes, Willy and monkey brain would while away the endless hours on comedy tour by sarcastically testing new jokes or characters, on one another. Vastly amusing to them, not so much to those around. He had cultivated his monkey brain for years on tour to help him get juiced for the stand up show each night. Now, it was Willy's worst time of the day for uninvited adrenaline, and then the inevitable depression at sunset. He accepted that he couldn't tour or do long shows anymore. Such was life after sixty. "Shut up!" But, most of the time Willy felt like he was just waiting around to die. What's the point? No raison d'être! (Whatever that means.) He joked that the first evening after he did die, what was left of his carcass would hump its way to the nearest comedy stage and do 30 minutes!

Then recently, his left knee, spine, two aortic veins, and head dent all thought they were a 1991 Buick, and just quit working! So, life is tough! Walk it off. Hold what you got! Make lemonade! "Shut up monkey brain!" Gradually, he settled back, and gratefully fell asleep without charting Leno and Letterman this time. As all identity flowed away, Willy smiled at himself and again puzzled Buddha's question: "What does one get when one plants rice?" The answer is obvious...rice. His simple insight is to understand that what you have in your life is exactly what you have previously planted. If you want something different in your life...plant the seeds for it, because you get and have what you plant! (Monkey brain: Pretty sure the "rice" lesson is from an old episode of "Kung Fu")

So, if it happened that Willy woke up tomorrow and once again didn't know who he was, then he'd have to do his damndest to make sure that person was funny! Funny was all that counted to him. Even if Willy couldn't be funny anymore, someone else could. It was a weird bargain, but he could live with that. Semper funny! Willy called monkey brain a filthy name. "But, who was that red haired girl, anyway? Shut up monkey brain, please, just shut up!"

...blinking awake, Willy put his red van in park and turned off the engine. He realized somebody had rented his body, again! Damn!