As couple of years went by, I got my first desktop computer. It was 586. I remember people claiming that there is no such thing. The truth is that my 586 really did exist, it wasn't imaginary. What 586 meant, was that it was a pentium-class chip made by a company other than Intel. That PC already had some more power. Playing Colonization, Civilization, Sextris (I think that was the name of one stupid game, not 100% sure), not to mention Wolfenstein and Golden Axe. Some of these games I also played in my fathers office in village council building. I also learned to program in Q-Basic. Or at least I called it programming, creating Hello World programs and making rectangles move and change colors. 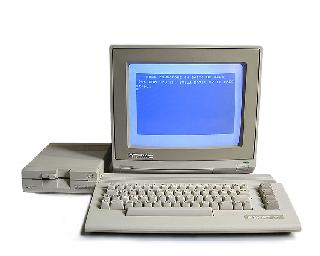 Now that to think about it, there was actually one other game I used to play a lot with my father. It was called Lotus, one of the first neat car games. One of the reasons I remember it is the fact that with my 586 it worked really great. But every next computer I bought was obviously always faster and more powerful than the previous one. And Lotus changed game speed based on your computer speed. So with every next computer the cars drove faster and faster until it finished a lap in 1 second or something, making the game totally unplayable.

Of course, at the same time I also had a number of tv-games like Dandy, Ziliton and something else I can't remember. I never had anything as fancy as a Playstation.

Finally my parents decided that I should get a new computer and donate that one to people with less resources. Well, I think donating things to people who need them is always a good thing. But ... in my opinion, donating that computer was pure cruelty.


"
In my opinion, donating that computer was pure cruelty.
My next computer was a laptop by a local company. I remember Quake 3 played almost well on it already. It lasted couple of years, but then something got screwed up. It started hanging, well, partly. What it meant was that it worked when I moved it around in the air with one hand and tried to type or move the mouse or touchpad with the other. Wasn't pretty. So I kind of borrowed my mother's laptop and forgot to return it. Which of course ended again with some sort of fuzzy screen problem. The good part, before I managed to screw it up, I actually managed to install Mac OS into a pc based system. Just for testing purposes.

My current laptop is a small Acer which has pretty much reached the end of its life. First it was good but now it's slowly but surely dying on me.

Over time the requirements for a computer have changed a lot for me. Right now, while I do have a desktop computer as well, I can't do without a laptop. And in case of a laptop I'm not looking for so much power as I do the battery time and light weight. The more powerful and reliable it is, the better of course. So one option I have found is from Lenovo's Ultrabook series. With a discount of $599 I could get a laptop with a 7-hour battery, 3.75 lbs weight, laptop that is fast and quiet, laptop that also includes 90-day standby mode and Anti-theft technology.

If you have used it, please feel free to share your opinion about it. And what's more, it would be interesting to hear what type of computers you have used before. Now that I'm thinking about it, at a friend's place I also used Commodore 64 and Juku. Hmm.