"The Nissan NV 200 unveiled today will be the safest, most comfortable and most convenient taxi the City has ever had," said New York City Mayor Michael R. Bloomberg April 3, 2012. "New York City cabs have always been iconic, and now they will set a new standard. The 600,000 passengers who use taxis to get around every day deserve the cutting-edge technology and top-of-the-line safety features that this model delivers." 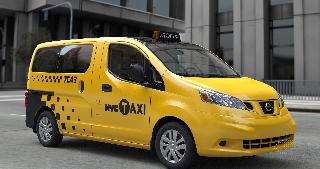 What's the standard he is talking about? Just to introduce you a few nice features of The 2014 Nissan NV200 taxi:


Additionally, as part of the Taxi of Tomorrow program, Nissan is also launching a pilot program to study the use of electric vehicles as taxes.

The Nissan NV200 Taxi with all the standard features will cost $29,700 and it will be the exclusive taxi of NYC starting from late 2013.

The Taxi of Tomorrow can be seen at the 2012 New York International Auto Show at the Jacob Javits Center between April 6 and April 15, 2012.