This well-crafted movie is an inspiration for all ages.
By Mark Jabo
2006-05-15
Akeelah and the Bee deserves an A-plus for presenting us a world where the best we have within us is encouraged to shine. If
you don't tear up at least once during this inspiring story, you should
have to stay after school and write on the blackboard five hundred
times: "I will develop a soul."


Sure, there are one or two moments of blatant
manipulation during the movie; but for the most part, the drama of
Akeelah's journey is driven by the story and director/writer Doug
Atchison is careful not to get in the way.

There is much that is special about this movie. Powerful
performances by Laurence Fishburne and Angela Basset (two actors who
probably exude smoldering charisma when they take a nap) serve to
showcase a gem of a performance by 13 year-old Keke Palmer as Akeelah. Palmer
gives a wide-ranging and emotionally nuanced portrayal that captures
the concerns, pressures, fears and joys of a child who wants to excel
and, at the same time, just wants to fit in. 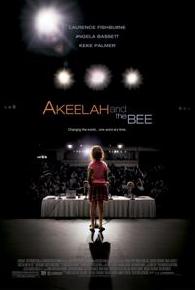 An unexpected delight in Akeelah is the status accorded to all the kids who are participating in the spelling contests. They are presented as intelligent but not overly geeky and the movie consistently displays a respect for their accomplishments. The
bee competition is filmed like a prizefight with quick cuts and a bell
that signals elimination as competitor after competitor falls.

The rapid-fire
editing conveys a spirited, competitive atmosphere and, more
effectively than any platitude-filled speech, serves to elevate the
smart kids to a level of admiration normally reserved for
student-athletes. The message here is that it's alright to be good at something different. It's
the kind of representation you hope might give some good kids in the
back of the theater just enough courage and just enough hope to ignore
taunts of "braniac" and to pursue their own dreams. The magic of this
movie is that you'll leave the theater believing such an impact is
possible.

Much of the movie's power comes from the subtlety and understatement with which it conveys respect for achievement. In
a movie populated by teachers and authority figures (good and bad), one
of the interesting juxtapositions of the film is that the children
consistently teach the adults. The adults have
much to learn about courage and fear, sportsmanship and competition,
strength and kindness, and the power of goals and determination. Time
after time, the kids in the spelling bee show a level of maturity and
respect for others that the adults have either forgotten or never
learned.


Akeelah and the Bee presents the struggles and successes of a remarkable young girl in a unique way that sets it above other films in its genre. This inspiring, feel-good story emerges as one of the must-see movies of the summer.

Nobody should have to spell that out for you.