If legendary one-liner comic Henny Youngman were alive, hed have a lot of jokes about this landmark election! Its a unique point in social evolution. Can some jokes change the world? No! But, certain jokes can help some people find our world more palatable.
By Lue Deck
2016-11-08
(Perhaps, it should be: Madame President!)

If legendary one-liner comic Henny Youngman were alive, he'd have a lot of jokes about this landmark election! It's a unique point in social evolution. Can some jokes change the world? No! But, certain jokes can help some people find our world more palatable.

For the first time in America's history, there may be a woman sworn in as our Commander-in- Chief! Wouldn't it be funny, too? Shouldn't it be? If a woman were our president, what are the possibilities? Well, some crazy thoughts come to my mind. First:

New underwear and haircuts for everybody!
Everybody in Congress gets a spanking! They need some discipline.
Everybody in South Carolina is grounded, for two weeks!
Purses over 26 lbs. will qualify for handicap parking!
Get ready for Bra-less Thursdays!
She will make the 3 Stooges illegal!
Moultrin laced municipal water!
Convicted rapists will be re-tasked as garden mulch!
No more Wars! (Unless it's about nail polish!)

In federal court, on TV, make Denzel, Obama, and Chris Rock prove that the myth is true!

Those are the first changes I'd advise Madame President to enact. To measure the collective funny of my comic pals on Facebook, I ran a little contest on my timeline to elicit diverse viewpoints. Thanks comics, for more than 50 posts on this.

I start, not with my favorite joke submission, but with one that defines this task with physics:
"Writing a joke on the sex of a president, without being sexist?? Couldn't we just discover, and isolate "dark matter" first?" from Jacob Silvis. This merited a special mention!

"With a woman president, the budget would be balanced, ISIS would be dealt with, and for once Everybody's room would be clean!"

"Finally, a president to lick their fingers, and wipe the schmutz off America's face!"

"For the first time in 240 years, all the nation's toilet seats will be bolted to the bowl!" 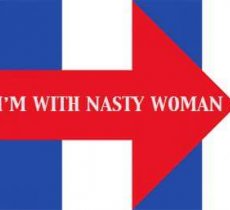 Some of my favorite responses merit an honorable mention:
"Our first lady president will be able to recite every single one of their treaty violations, to each of the nations, from memory!" (And match drapes at the same time!) Maurice Northup.

"With a woman president, our enemies will always know when they've pissed us off! But, not why!" (You know what I'm talking about!) Ronnie Bullard.

"The biggest changes, after our 1st female president, will be that her Presidential Library will consist mostly of cookbooks!" Bret Sohl.

This next one is a bit questionable, but the following assist really made me laugh:
"Once again, a wiener may bring down a Clinton presidency!" Alan Katz. With:
"Wiener, wiener, chicken diener!" Chip Sobel.

This one is a little risqué, but
"Bill grabs the panties, she grabs the wallets!" Al April.

This entry was 24 hours late, and doesn't qualify for judging, but I know the guy, so
"We'll be saving money with a woman President because she won't be making as much as a man! (In the same job!) Lance Montalto.

Here's my Facebook post entry: "If some men don't care if we have a woman as president, I don't care that they don't caresit back relaxand enjoy it!"

Some more items to ponder as I close:
Amend our Constitution: Make ERA retroactive!

Employers requiring women to wear high heels will have to pay a $100 bonus!

Leftovers not consumed by tomorrow will be taxed at $5 per plate, with the profits used to give away sensible shoes!

Nurses get a free vacation in VegasMONTHLY!

Men leaving dirty clothes on the floor is now a "Take me OUT to dinner" offense! Twice!

Wouldn't we all like to see our first lady president go al "Oprah" on ISIS, China and Russia? "Talk to the hand, mister tough guy!" Now, talk to the finger! The finger that hits the button!

For her entire term, men will be paid 3% LESS! And the money will be diverted to fund Planned Parenthood! (You bastards!)

No fault divorces nationwide, but with a 5 minute dress-down from the jilted spouse! (On CNN!)

Grab an ass, grab a breastlose a toe! Do it again, lose two more toes!

Executive Order #3: No thongs in public! (Unless they are worn alone!)

Repetitive farting in public (or a woman's bed) is a death penalty offense!

Across our great nation, Women's lunch hour will be federally mandated to extend for 15 more minutes! That's so she can talk herself into going back into work!

To be serious for just one moment: I'd like to see the coming of our first female president as heralding the balancing of power for women, at long last. The rest is still negotiable, but all should insist on two things:
A) No means NO! NO! NO! NO Mutha-f***er!
B) A woman's choice should forever remain: A woman's choice! And that's no joke!
One last Facebook post gives my essay its finish. (And I suspect it's a woman!) She has the final word here:
After we've achieved having our first Woman in The Oval Office, the possibilities might be that little girls in America, and worldwide will finally realize that being EQUAL to men, may actually be a reduction in their status! daTaj from L.A.

I'm with her! I'm
Lue Deck
The Comic in Red Shoes