Critics would point out glaring discrepencies in the script. The continuity editor would be sacked, never to work again in the industry. Never mind that the actors too seem to be a bit wooden. When they speak their dialogue, it simply doesn't ring true. Indeed, if the real life events played out on the world stage post nine-eleven were a motion picture, then the film would be a stinker, to be sure.
By Tom Nicholson
2006-11-08

Critics would point out glaring discrepencies in the script. The continuity editor would be sacked, never to work again in the industry. Never mind that the actors too seem to be a bit wooden. When they speak their dialogue, it simply doesn't ring true. Indeed, if the real life events played out on the world stage post nine-eleven were a motion picture, then the film would be a stinker, to be sure.

First of all, the movie can't seem to decide on a villain. The hero, diversely, if we choose to accept him as such, is the President of the , the most powerful man in the free world, George Bush.  For those of you who may have been living in a cave for the past six years, he is the tough talking Texan that is on the television constantly, the one who has the I.Q. of a dung-beetle. His performance comes somewhere between Howdy Doody as himself and George C. Scott as Patton. 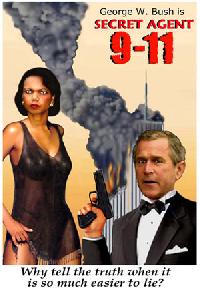 And what of the tall, bearded Saudi Arabian who has apparently, quite literally been living in a cave for the past six years? Hiding out, as it were; gone to ground?  That manufactured evil-doer they want us to accept as the villain, the man who the world knows as Osama bin Laden?  He seemed to be an integral part of the plot in the first reel of this opus, but the audience seems to have all but forgotten about him now.

Our dubious hero told the audience at the outset, right after all the opening carnage that this evil man would be brought to justice, but that hasn't happened. Instead, he found another manufactured villain, one Saddam Hussein, hiding in a drainpipe in an entirely different country than the one he ought to have been looking for bin Laden in. If the viewing audience can recall, our hero was pretty darned certain that the fellow behind all those crashing planes and carnage at the beginning of the story was the criminally insane Saudi millionaire / Muslim zealot, Osama bin Laden, and we were also informed that the suicidal hijackers of said planes that carried out his nefarious plans were Saudi Arabian by birth.

Now it would seem to me that if he was sincere about seriously apprehending this baddie and his cronies, should have been way down on his hide and seek check-list. Maybe penciled in somewhere between and .  The whole scene with him making these claims was reminiscent of O.J. Simpson's (whatever became of him, anyone know?) Oscar-worthy performance wherein he claimed that he would personally bring the real killer(s) of Nicole Brown Simpson and Ron Goldman to justice, even if he had to look on every golf course in in order to find them. Remember that movie? Talk about a surprise ending! Bush cannot come close to Mr. Simpson when it comes to acting. It is like comparing Pee Wee Herman to Robert De Niro. I mean, O.J. was convincing in that role. I personally didn't believe it, but a jury did, and who am I anyway? Regardless, you have to respect his performance.

So here we are more than five years on since the movie started, and the audience is more than a little confused. The pace of the film is erratic, and it didn't help to have all those natural disasters happening. I suppose the film-makers threw in those hurricanes and earthquakes into the plot to try to disguise the fact that the plot line isn't very credible, but it just served to make the audience I was part of squirm in their seats. In the time that has elapsed, this audience seems to have forgotten about all those innocent victims of the atrocious crimes that opened this film. And that brings this reviewer to his final comment: How should this motion picture be categorized? Is it a comedy? At some points it has seemed uproariously funny, but not constantly. Is it a tragedy? At some points it has moved me to tears, but it is not a bona-fide tear-jerker. Is it a horror? Yes, because since it started and all the way through it, I have been scared shitless. And the most terrifying thing about it is it still isn't over yet.