Land of the Lost

Is it just me or has everyone seemingly lost their mind when it comes to celebrities? Remember when celebrities were acknowledged for their merit in the arts or how hard they worked and thus how successful they were. We appreciated what they did and thus celebrated their achievements. Merriam-Webster even defines celebrity as "a celebrated person." Lately though I feel the semi-exclusive celebrity club is admitting members of a less celebratory worthiness. Celebrity has become almost a bad word, with negative connotations and unfavorable stigmas surrounding it. The word immediately conjures up images of public drunkenness, internet embarrassment, anorexic heroine addicts and being a general waste to society. One used to have to work for their celebrity status yet now all you have to do is make a fool of yourself on a global level, be the public drunk love child of someone who is obscenely rich, or give birth to more puppies then your average cocker spaniel could.

The giant sunglasses are actually of course a byproduct of celebrities being stalked by Paparazzi twenty four hours a day AFTER a night of drunken debauchery otherwise known as a good time, thus celebrities are now seen looking like the Unabomber at an entomologist convention. However it is important to understand people that this is not called fashion this is called disguise and hangover maintenance.
"
What is wrong with these people spending all this money thinking they are hip and trendy yet looking like something went awfully wrong inside the teleportation pod?
Another reason is that the celebrity doesn't want the world to know that last night after the party they were cast in the reprising role of domestic violence poster child. There is absolutely no reason however for the average person on the street to become a drone and don the giant sunglasses and hoodie when going to the store in July. Just because Josh Hartnett wants to jog in anonymity doesn't mean that the rest of us have to copy his attire like lemmings. It doesn't make you look cool, hip or fashionable it just makes you look like a loser or a psychopath rapist, mainly because there AREN'T people stalking you for your photo. 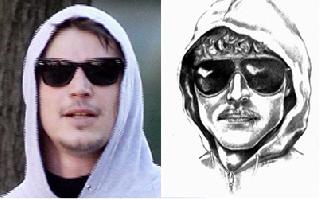 I'm curious; do the people who need prescription lenses get charged more by the eye doctor for using five times the amount of normal glass to make their prescription sunglasses? What is wrong with these people spending all this money thinking they are hip and trendy yet looking like something went awfully wrong inside the teleportation pod? Would it help you all realize how stupid you look if I put it in limerick form?

You are not Jackie Onassis
Wearing laughable sunglasses
You half-witted fool
You are a big tool
I think you look like Jackasses!

Lose the giant insect shades people and think for yourselves if only for just one second. When your favorite socialite train wreck has an evening on the town and looks like last nights road kill the next morning, that doesn't mean you need to buy the same hangover camouflage to wear regularly. Just because you enjoyed a blockbuster movie with a particular celebrity actor/actress in it, don't start dressing like them when they are in disguise running from the media. If you went to the circus you wouldn't come home and dress in clown attire the next day just because you thought it was a good show. Make no mistake about it though, that is exactly what you are doing. You look like a clown and if you are going to wear sunglasses that big you might as well complete the ensemble with the rest of the appropriate accoutrements. 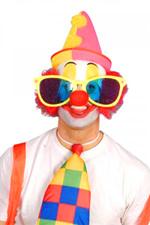 Wearing gargantuan sunglasses you have no more class or style then if you started flashing your crotch every time you got in or out of a vehicle. (Although I am not discouraging this of course, it is a free country after all) You look ridiculous trying to mimic the style of a group of individuals that not only are beginning to represent the lowest common denominator in society but are also supposed to be incognito.

"
Wearing gargantuan sunglasses you have no more class or style then if you started flashing your crotch every time you got in or out of a vehicle.
Desperately trying to follow in their footsteps hovers dangerously close to retardation and although no one will STILL know who you are, they WILL all surely know that your brain is only about the size of a walnut. 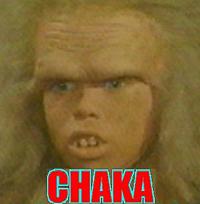