Its hard for to fathom what technology was like 50 years ago. In fact most would agree that the technology age has existed in its entirety in the last 50 years.
By Niall Murphy
2009-04-03

This article belongs to Technology (in 50 years) theme.

I remember hearing a story about the evolution of the television, and how it could develop in the next 50 years. When we look at the beginnings of television, from the old black and white box, to the analogue T.V's of the past 20 years, and of course the flat screen HD/LCD T.V.'s we see now.
In years to come is it not feasible that we could watch all our favourite programmes on the go by wearing some sort of technology ridden sunglasses, and even further into the future we may even get implants, so that we can see tune in whenever we so choose. Who knows, it may be something like having an imagination!

It is interesting to speculate as to what the future may hold for our technological advances, but one thing usually over-looked by our musings is the cost to the environment. Now, I am far from a tree-hugging hippy, in fact I am probably one of the worst people I know when it comes to letting the environment influence my decisions. 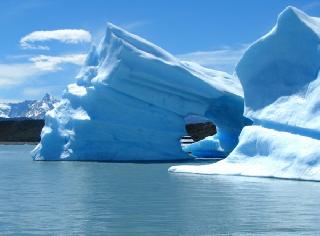 Lagos Argentina, Iceberg seen from boat.
The simple fact is though if we use history as a guide to our future performance it is clear that something has to change. I have no doubt that we as a species are capable of making cars fly as fast as aeroplanes, so that a trip to the shops, would only be slightly shorter than a trip to the Bahamas. I am confident that we can invent the means to make our lives so much easier in every way. However, if we look at the state our world is in at the moment it is clear that this reckless abandon in the face of technological gain has to stop. The simple fact is that in the next 50 years the major advances we are likely to see in the world will be to do with energy conservation and a move away from fossil fuels as our biggest form of energy. In 2007 the fastest growing energy source in the world wasn't Bio-fuels, or renewable energy resources. The fastest growing energy industry in 2007 was the coal industry. Frightening, I know.

The climatic changes that have occurred over the millennia in our history have become so erratic and the statistics tell us that we have to change sooner rather than later. In the last 250 years the world has gathered so much momentum that it is careening towards obliteration, which is a scary thought. I mean in the next 50 years, if we drill for oil in Alaska, if we continue to rape the planets internal parts then there will be consequences. Some of which we have already seen. Katrina was not a fluke and may only be a pre-curser to some truly frightening events in the future.

The simple truth is who knows?' Maybe tomorrow some scientist will develop some sort of new energy source that we as the public never even knew about. That would be nice alright, and I see it happening, just not in this decade. If it were to happen though then the extent of what technology could hold for us in the future would be limited only by our imagination.

When I began this article, I thought it would be a frivolous journey through the technological advances of the past and an inquisitive eye toward what the future may hold for us. It is exciting to think what the future may hold for us, and whether we will be as inept with new technology in 50 years, as our parents are with new technologies today. The simple truth is that in the next 50 years something remarkable has to happen to totally change the way we derive our energy in order to fan the flames of technological advance.
We are all capable of greatness and the next 50 years will test this resolve to the full.