Wine: the worst hangover ever

The one thing I can tell you, with full knowledge, is that no matter how good, expensive, old, tasteful or rare a wine is, if you get hammered with it, the next day you'll regret it so hardly that only a shot between the eyes would spare you from the pain and suffering.
By Ivan Paredes
2019-01-19

This article belongs to Wine theme.

Here I'm again, sitting in front of my keyboard, trying to fool myself and write something. I have my moments, with the right topic I find enlightenment and write fine pieces, but wine is not exactly one of my areas of expertise.

I won't try to be a connoisseur because I don't know anything about wine (or anything else for that matter). The only fact about this alcoholic beverage that wanders around my mental database is that almost every type of wine is made of some fruit. 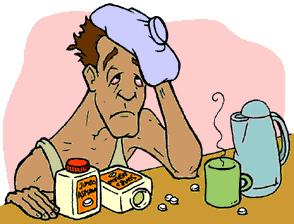 the morning after
I haven't travelled the world as much as I wanted to, but had the opportunity to try (sitting on the same ass) many kinds of wines (and other alcoholic beverages). Not exactly the honor that should be reserved for an ignorant tongue as mine, but that's the way life is, so suck it. In this many taste adventures, I've seen apple wine, pear wine, a lot of types of grape wine (obviously) and once passed trough a town in this God forsaken part of the world that claimed to make the best damn orange wine you'll ever taste (with those exact words) but never stopped to try it.

The one thing I can tell you, with full knowledge, is that no matter how good, expensive, old, tasteful or rare a wine is, if you get hammered with it, the next day you'll regret it so hardly that only a shot between the eyes would spare you from the pain and suffering.

Of course this happens almost every time you get hammered, but not with every type of toxic waste you drink.

Whiskey, scotch to be exact, doesn't cause that nasty sensation. The better the whiskey is, the best morning you'll have.

Of course this is not 100% accurate because alcohol doesn't metabolize the same way in every person, but I can assure you, if you drink wine or something from a bottle without a tag, or that looks like bathroom cleaner, tastes like bleach, or ends in 'schnaya' you'll be spending the first few hours of your Sunday praying to God, with the knees soared and the cheek glued to the w.c
This nasty sensation is usually accompanied with severe headaches, thirst so hard that you could drink your weight in water, and the promise that alcohol would never again.

Scientists have discovered the human genome, but no one has actually discovered why the hangover affects some of us harder than other (lucky bastards).

Our friends at Wikipedia define hangover as:
(veisalgia) the sum of unpleasant physiological effects following heavy consumption of drugs, particularly alcoholic beverages. The most commonly reported characteristics of a hangover include headache, nausea, sensitivity to light and noise, lethargy, dysphoria, and thirst.

But that's not all the truth, of course a heavy consumption of alcoholic beverages would cause an unpleasant effect the morning after, but those symptoms are not caused by alcohol alone, there must be something else in wine that kills your brain cells faster than whiskey.

After a profound investigation and years of experimentation, I've came with the following conclusions (not all mine, but I'm not drunk enough to copy-paste them)


"
The sum of unpleasant physiological effects following heavy consumption of drugs, particularly alcoholic beverages
The major cause of hangovers from wine is a class of molecules called congeners. Congeners are a by product of alcoholic fermentation and are present in high quantities in red wine. Congeners are usually present in higher concentration in darker liquors. 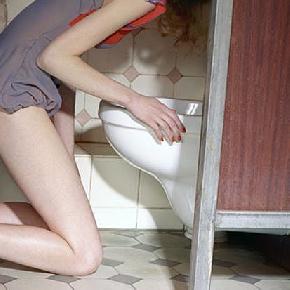 feel free to express yourself

Don't overdo it with colored liquors (red wine, whiskeys, cordials, dark rum). A cheap red wine hangover is absolutely THE WORST. Death without actually passing into the next world.


"
If you don't drink, you'll never experience hangover, so if you're trying to avoid it, follow this simple step
Don't overdo it with sweet blended concoctions. This is the classic mistake of high-school idiots, dumb college undergrads, and basic novice drinkers (who will probably never drink again). All of these sick sugary trendy drinks with cream of whatever, and doughnut-flavored schnapps, and layers of nifty floating colored syrups and liqueurs. Oh, please. Gag. Gallons of Coca-Cola mixed with hard liquor. Imitation raspberry-flavored margaritas and "daiquiris". (Raise your hand if you've ever even SEEN a real daiquiri.) The combination of all of that sugar in the stomach with the mandatory alcoholic kick in the head - the end-result is almost always the same. (I STILL remember the sight of the sidewalk outside of a cheezy teen bar in Underground Atlanta back when they served 18-yr.-olds.) Most kids still have to learn the hard way. Some people think it's a rite of passage to "adulthood". Yeah, right.

And of course, never blend different types of alcoholic beverages, this will only produce a state of displeasure so intense that you would rather be crushed by a school bus.

Ok, if you have came this far, you'll probably remember the worst parts of your young ages. Here follows a few tips to the morning after:

If you don't drink, you'll never experience hangover, so if you're trying to avoid it, follow this simple step. If you're not ready to live a life without vices at least try not to drink everything in front of you, including the water on the flower glasses, if you ingest a decent amount of alcohol you should prevent a hangover.

Of course, you won't take my advice, so here comes the part obtained by experimentation.

"
If you want to get hammered avoid red wine
As you read, a hangover is caused mainly by dehydration, son drink lots and lost of water, before, during and after your night of excess. This will prevent your brain from shrinking and stop or ease the pain. If you're trying to drink as there's no tomorrow (which you'll find out is not true - because tomorrow is exactly were hell awaits) stay away from wine and sugar.

After a night of excessive drinking, you'll need to regain the vitamins and minerals you'll lost, a good way to achieving so is by drinking Gatorade, but you might want to avoid the acid flavours, because they will just make you feel worst.

Also you would like to stay away from greasy food, and dairy products, milk doesn't blend well with the nasty stuff that floats inside your pounded belly. 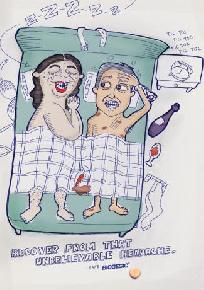 you know that nasty feeling
I've discovered a house medicine that helped me through my rough moments, it was made out of lemon (you might want to ease on it because of the acid), Andrew's salt (it also works with alka-seltzer), both mixed in a glass of mineral water (not regular, I must strongly advice that you use the sparkly one). After drinking that, take paracetamol pill, your favourite is good enough, here in Ecuador there's a pink one that have found strong enough called 'Finalin' if you understand spanish you can see the irony.
Finally, all of this should be accompanied by a compound of Vitamin B.

Now you know what to do, when you wake and get up and feel like your head is still on the pillow, with a little memory of where you are, hopefully on your own bed, and feeling like you want to erase last night from your head. Hope you can find useful my little piece of wisdom and remember, if you want to get hammered avoid red wine (cheap or expensive alike)

Cheers, let's have a cold one for the road.