Yes! God is coming. You can be sure of it. And boy is he going to be pissed when he sees what we've done. He gave us this beautiful planet and look what we've turned it into. I don't think we're going to be able to talk ourselves out of it this time. There is going to be Hell to pay. Literally. And don't even hope that god does not exist!

I may have already lost some of you by referring to God as He. This was not a generalization or even worse, some male chauvinistic assumption. No! I am certain that God is in fact a man. And this is why. A woman would have never let things go this far. A woman would have paid more attention, checked in a little more often. Not let things get so out of hand. A woman wouldn't get mad and bring down fire and Brimstone, flood the whole place, then just disappear for a few millennia. That's not how women work. She would have stayed in touch. Asked us how we were doing, made a few small changes to keep us on track. And another thing, a woman would have never left Eve alone with the snake. She would have seen that coming and went there with her. Women help each other. So God is definitely a man.


"
He made us after his own image, he gave us free will and put us on a beautiful planet and then he left us just to kick back and enjoy life.
Now why is God so pissed? It's because he screwed up and that is how men get when they screw up. They get pissed. Men don't like to be wrong and if you're God "you've got no excuse." Who are you going to blame? No one. And that would make anyone pissed even God. 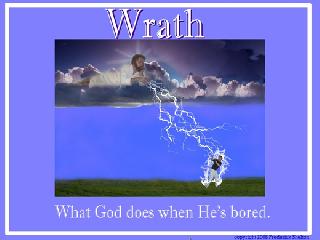 So how did God screw up? He trusted us, that's how. He made us after his own image, he gave us free will and put us on a beautiful planet and then he left us just to kick back and enjoy life. What else did he need to do? His work is done. Well that's where he screwed up. He didn't tell us how it worked. He didn't even tell us that it did work. Although any idiot should have figured that out. And now we get to the real problem. We humans are not just any idiot. We ate from the tree of knowledge, so we're smart.

Knowledge is not intelligence. No more that having information is possessing knowledge. Facts are of little use if you don't know what to do with them. And Knowledge is incredibly dangerous if you don't have the intelligence to use it wisely and that is where God dropped the ball. He gave us the ability to acquire knowledge but forgot to throw in the intelligence to use it wisely. Here we are with all this knowledge and nothing to do with it. So what did we do? We fixed things. Things that are not anywhere close to being broke. Like rivers. He gave us beautiful rivers but we had to fix them with Damns. He also gave us beautiful forests but they got in our way so we cut them down, and he gave us an abundance of food. But no, we had to grow more, by diverting the water to the denuded forest land.

And so on we went. Fixing stuff because "We Knew How." And now we have just about fixed our selves out of place to live. And when God comes back and finds out, we are going to be in big trouble.

But God has only himself to blame. He started it. He couldn't stop himself from fixing things any more that we could. There was Adam with everything he could want but that wasn't good enough. Adam complained that he needed some one to share it with. God could have said "No, you don't need another companion. You have a dog." But No. He fixed it. We'll never know why. Maybe after taking a look at man he realized he could do better. Maybe he was just showing off, "Watch me while I pull a rib out of your ass. Nothing up my sleeve." Ether way, God couldn't leave well enough alone and he had to fix it. And the rest, as they say, is history.

Now, does that mean I'm trying to blame all this on Women? Not at all. As a mater of fact, had God created a women first, things would have probably worked out fine. First of all she would have never asked for a man. That's a given. Why would she need a man when she has God. And God would have never gotten away with just wandering off and leaving her. That's another given. So in the off chance that something did need fixed, God would have been there with the "intelligence" to fix it right.


"
God could care less what we do to each other. We are like lays potato chips to God.
But that's not what happened and men took dominion overt the earth and started fixing it. And here we are, several thousands of years later. Turning natural resources into toxic waste. Polluting our oceans, rivers and streams, causing global warming, melting our ice caps. And generally turning this beautiful planet into a sewer in complete disregard for every thing he gave us. And that's why he'll be mad and why we're in big trouble.

Some people will tell you that it is the way we have been treating each other that will make him upset.. In my opinion God could care less what we do to each other. We are like lays potato chips to God. "He'll make more" Look how easy it is to create people. Ask any High School kid after prom night. He gave us free will and if we want to use it to hurt each other I'm sure he finds it strange but not upsetting. Remember he created us last. That's called an after thought in the big scheme of things. For those that are really evil I think he would rely on us to take care of them on an individual basis. I mean if fire and brimstone and rainfall that made Seattle look like the Sahara didn't get our attention then what else could he do. No it's what we have done to the earth that we're going to catch it for. Remember he did not include a way of making any more of it, He assumed that one planet was enough. Oop! Guess not.

So what will he do when he comes back. Well first of all I think he owes the earth, (not us the real residents) a big apology. He should just hold his hat in his hand and fess up. Humans were a big mistake and he should admit it. Maybe he did a better job with people on other planets. There is an organization called SETI Search for Extraterrestrial Intelligence that is actually looking for them. They are of the opinion that with all the inhabitable planets out there in the universe there must be others with intelligent life forms on them. I hope so because there aren't any here. I don't know what criteria is used to determine if the life forms are intelligent but I am positive that the first season of Jerry Springer took us out of the running. So God should first apologize and say he is sorry to all the plants and animals of earth.

Next he needs to decide if he wants to straighten out this mess humans have made or just toss the earth into the sun and hope no one notices. Of Course he does have seven days invested in this place and those are not just any days. Those are god days. So he might not want to trash it. But what else can he do. I mean things are pretty much settled in now. what with the earths crust all cooled down and everything. He could just shifts some plates around and kind of level things but that is going to tear up a lot of good stuff as well. Wait! What am I doing. I'm no better that anyone else, trying to figure out how to fix it. Let's just leave that to God. It's his bad. He can deal with it.

The real question is, "what is he going to do with us." There has been a lot of speculation about Hell and what it would be like. For me, hell would be just leaving it the way it is. Realizing there is nothing that can done. For all eternity we will be forced to breathe the stench we have created and eat and drink the poison we have dumped in our own back yards. The real hell will be finally understanding, it is not be us that will really suffer for our sins, it is our sweet an innocent children, who did nothing wrong except than having us for parents. Living with that knowledge for all eternity would be the worst hell I can imagine.