Cheap Transportation
By Robert P. Herbst
2005-01-11
In the ongoing effort to improve transportation between Mount Perry, Florida and Tallahassee, the state capitol, a consortium of investors have banded together to build a secret airship they hope will guarantee cheap and reliable transportation between the two towns. To this end the services of Mount Perry's very own lighter than air ship engineer, Count Zeppelin Von Gasbag, have been enlisted.

Count Von Gasbag immediately went to work designing a huge zeppelin to fill the bill. It would be cheap to operate and comfortable to fly around in. Secrecy, however, was going to be a real problem. Just where do you hide a five hundred foot long zeppelin in a town with only one mountain? 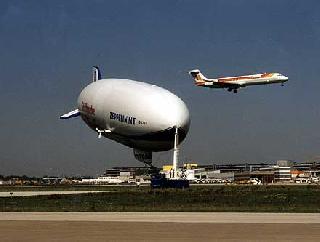 In order to make this work there had to be a series of earthquakes to indicate there was an eruption of our long dormant mountain about to happen. A Series of large explosions were set off deep underground. Unfortunately, all this did was to jiggle the mud in the swamps and the land under some of our buildings to liquify. The buildings promptly sand out of sight in the liquid mud. I suppose the explosions might have worked nicely if it hadn't been for the fact, there was no general evacuation of the population scheduled because of the eminent eruption. Still, no one seemed to care or even notice.

There was one other minor detail in this ruse. At five hundred feet long and only one hundred feet in height the airship would not fit inside a mountain peak horizontally. It was finally decided to build the lighter than air ship upright, while standing on its tail end like a rocket.

At this point we must address the question of just how would one float something this size without a ready source of Hydrogen or Helium. The answer proved quite simple. A series of funnels were placed out in the swamp, over the various active bogs which continuously produced Swamp Gas. Here in Mount Perry, swamp gas is a mixture of Methane gas and sulphurous smelling fumes.

As these fumes bubbled to the surface they were collected under the funnel and piped to a huge compressor. The compressed gas was then bottled until it was ready to be put into the lighter than airship. The zeppelin itself waited patiently under the phony second peak of our beloved snow capped, Mount Perry.

On the fateful day, a public announcement of the existence of the huge lighter than air ship was handed over to the Mount Perry Newspaper and Fish Wrap. The zeppelin was to be filled with gas and allowed to burst through the canvas concealing it for these many months. It was then to hover silently, tethered to the real peak of Mount Perry at a special zeppelin mooring mast on the roof of the Swamp County Court House.

All would have gone according to plan if it hadn't been for the fact, someone had hired the services of The Mount Perry town idiot, Yodar Hoopelhoffer to facilitate the release of the lighter than air craft at the appropriate moment.

Yodar was to work the controls of the machine filling the zeppelin with gas. When the command came down to close the valves and release the zeppelin, Yodar was busy listening to a CD on his portable CD Player.

When he realized he was being given a command he immediately snapped to attention and ripped off the CD players head set. Unfortunately all he heard of the command was, "Release the zeppelin!" Which he did without a moments hesitation.

With a deafening noise the zeppelin roared and zoomed in an erratic flight path over beautiful downtown Mount Perry, Florida as it did so it sprayed the entire area with the most awful, vile smelling, sulphurous fumes. These fumes seeped into every building in the town no matter how tightly sealed they were.

To add to the problem, there was just enough Methane gas mixed with the fumes to be combustible. Someone, somewhere, lit a match. The resulting flash fire burned every hair off every resident of the town of Mount Perry, Florida.

The flash fire quickly spread upwards and ignited the fumes that remained inside the various gas bags making up the interior of the zeppelin. This caused a tremendous explosion that swelled the gas bags to over 100 times their normal size.

Right now there are many groups of very bald and slightly scorched people scouring the surrounding swamps for any trace of Yodar or Count Von Gasbag. In observing these groups, from a safe distance, I'd have to conclude that they are not in the best of humor.