Horticultural Science
By Robert P. Herbst
2004-12-27
It's a hot day here in the middle of Mount Perry, Florida. But I am content sitting here in the shade of a Mount Perry Peanut Tree, looking up at the cool, snow covered peak of our beloved Mount Perry.

It's interesting to note that the Mount Perry Peanut Tree originated right here in Mount Perry, Florida. Frankly, it was the result of a genetic mistake. It was an offshoot of attempts made by our very own, world famous genetics expert, Dr. Gene Splicer, to create a pine apple tree by splicing the genes of a pine tree with an apple tree. These experiments were a dismal failure.

Somehow during his experimentation, he dropped his peanut butter and jelly sandwich into the automatic gene splicer. The seeds that came out of the machine grow the now world famous Mount Perry Peanut Tree. As always, sometimes the best results of any experiment happen quite by accident.

Although this genetic mutation was created by accident, Dr. Splicer is always happy to take all the credit for it. He points to his creation with great pride and states, "You mean, --- I did this?" 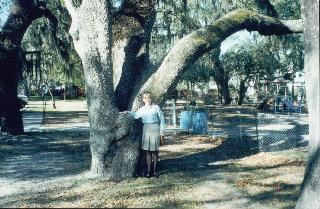 Under the Peanut Tree

Under the Peanut Tree

The tree grows about twenty feet in height and is broadly branched with lots of healthy looking, dark green leaves. This makes the tree not only a commercially viable orchard tree, but it also functions as a landscape shade tree.

It seems to do well in just about any soil with a minimum of fertilization. It should be noted however, if fruit is desired, a minimum of two trees must be planted within about fifteen feet of each other to facilitate pollination, but not closer than ten feet. It wouldn't do to crowd these beauties.

About spring time, when the first leaves and flowers appear on the tree, the peanut crop begins to form in large clusters on the ends of the branches. Oddly enough, honey harvested from the bees that pollinate the Mount Perry Peanut Tree has a distinct peanut butter and jelly flavor. It can readily be substituted on sandwiches given to little children who have never seen or tasted the real thing.

Here my lovely wife Lyudmila stands beneath the spreading branches of a Mount Perry Peanut Tree. She had never seen or even heard of a peanut tree until she came here from Feodosia, Crimea, Ukraine in December of 1998. Now, peanut butter and jelly sandwiches are a part of our regular diet.

The tree is adaptable to a wide variety of climatic conditions from North to South, and East to West. Although, when planted south of the Equator, the fruiting seasons seem to be reversed and the grape crop comes first.

The tree is immune to most insect attacks because it is a relatively new member of the Florida Forest Community. One of the only insects known to bother the tree is the Mount Perry Grape Borer.

This insect bores a tiny hole into the immature fruit of the trees secondary crop, which are the grapes used to make the jelly the peanut butter is usually associated with. The insect lays an egg in the hole. The embryo develops and the egg hatches, releasing a worm into the grape. The worm then eats its way into the immature grape, which causes the infested grape to float in water.

In the Northern Hemisphere, the grape crop is usually floated in a water bath after harvest. The infested grapes are skimmed off for the production of our now world famous Mount Perry Peanut Butter and Jelly Wine.

The wine is famous because it has a real worm in the bottom of each bottle. This wine is not only unique because of the worm but also because of its taste. The taste is remarkably similar to the taste of a peanut butter and jelly sandwich.

The reason for the worm being in the bottle is not clear. The custom apparently started when a live worm crawled out of a fermenting grape so drunk it couldn't tell which direction it was to the safety of the ground. It fell into the bottle it was crawling on, and the bottle was filled and sealed.

Apparently the worm, already quite plastered, tried to drink the rest of the alcohol out of the wine. It became so drunk it swam to the bottom of the bottle where it drowned.

Since then, no bottle of Mount Perry Peanut Butter and Jelly Wine is considered complete without a worm floating about in the bottom of the bottle. It is rumored the worm drinks almost all the alcohol in the wine before it drowns. Therefore, whoever gets the worm in their glass gets much drunker than anyone else. Just why this is important is anyone's guess.

South of the Equator, insect predation is not a problem. The Mount Perry Grape Borer is completely confused by the reverse seasons. It tries to eat a hole in the peanut but the masticated peanut meat becomes peanut butter and sticks to the roof of its mouth. With its mouth firmly blocked with peanut butter, the insect quickly succumbs to starvation.

For reasons known only to a few of the scientists who worked on the project, the tree seems to grow best when planted in the same orchard with the "Bread and Butter Vine". For some odd reason, when the vine is not grown in conjunction with the tree, the tree gets sticky and has a tendency to stick to your fingers. Then the finished product has an even greater tendency to adhere to the roof of your mouth when you eat it.

If you feel you might like to have a Mount Perry Peanut Tree growing in your back yard, send your request to, The Mount Perry Mental Health Association at 101 N. Jefferson Street, Mount Perry, Florida 06660. A tree will be delivered to your home by some of our friendly, trained, professional staff members.

Later, specially schooled technicians will show up at your door, dressed in white uniforms and a net, to help you plant your Mount Perry Peanut Tree. The staff is well schooled in how to deal with situations like this.