How (NOT) to fix and build things

Okay, okay, long story short, I've been living in my apartment for couple of years now and within that time I have noticed a few weird things there left for me by the previous renter, by the builder, or ... by now, by me. Specifically, I'd like to show you a few things that would probably grab your attention. I'm not saying that all of those examples are really, really bad. They're not, but ... if at all possible, I think in most cases a different solution would make a lot of sense.

The genius of the builder

Note that this solution had been created by the builder of the house. I can't blame them though, after all the building was put up during the boom years and everything had to be done quickly. And sometimes it could have happened that they ran out of electrical wires so that probably they had to take short-cuts here and there. Makes sense, right?


The genius of the previous guy who rented the apartment

As you can see, the water pipe had obviously gotten broken at some point, so they used some tape to fix it. And for a short term fix something like this works like a charm. 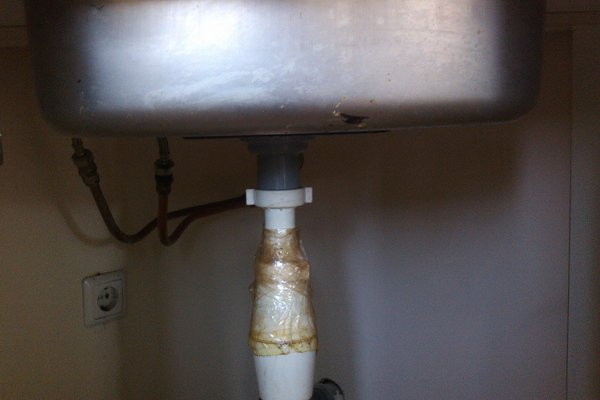 But for a longer term, probably not so well.

The genius of me

As the achievement of the previous guy kind of broke down after I had lived there for a year or so, and I seriously didn't feel like actually spending any time on fixing it or getting anyone else to do it (I know, I'm a lazy one, it took me a year to get a plumber for my toilet), I used an old pot and a a beer can. It's been working without any problems for couple of years now. As you can see, a beer can has something else in it in addition to just waster and vitamins. 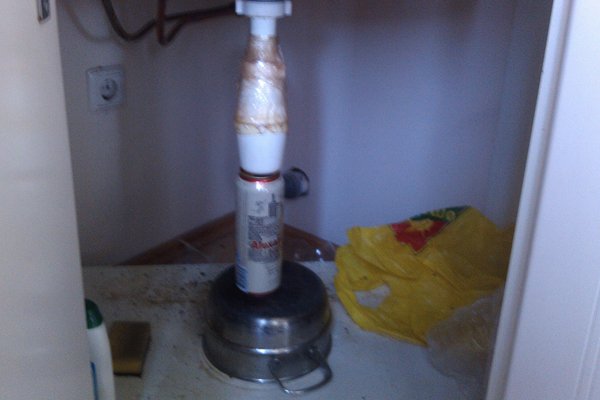 The real genius in me

As you can see, what I did was use two old TV tables from my cellar, removed most of the bottom part of the top one, used the two bottom legs which I didn't need anymore to make it stronger, and put the very bottom layer of the table (first removing two wheels) on top to achieve a slight curve. 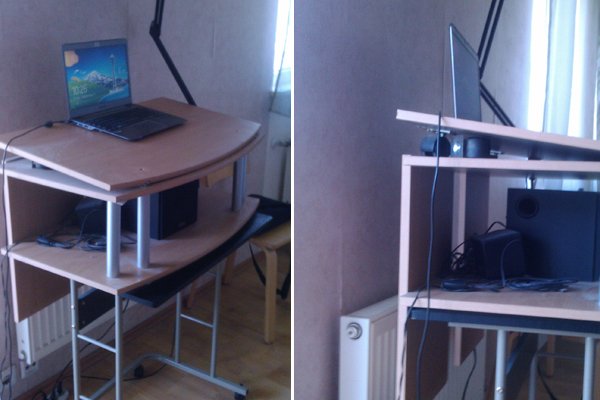 Now, I must say that I'm rather proud of myself in case of my laptop stand. Wouldn't fit well to any nicely decorated home, but for me, it works perfect. Okay, almost, it could be 10cm higher.

If you want to learn more how to ACTUALLY do things, you can find some help here or here.

But I think the solutions in my apartment are kind of...let's say, fun.