"Big Brother is Watching You," wrote George Orwell in the classic "1984."

However with the introduction or continued use of compulsory Identity Cards throughout his world, the days of a Police State and dictatorship are already here. In November 2003, the British Home Secretary, David Blunkett, announced the introduction of a national identity card scheme for the United Kingdom. By 2013, it is expected that every person in the United Kingdom will be required to have an identity card. The Government hopes this will deter illegal working, tackle immigration abuse, help protect citizens from identity theft, strengthen security by disrupting the use of false and multiple identities by terrorists and organised crime groups and finally to ensure free public services are only used by those entitled to them. However, is this really necessary or are we taking just one more step to Orwells Big Brother Police State and dictatorship?

Although an ID scheme was introduced in the country during and after the testing years of the Second World War, there is still great trepidation amongst citizens as to why the card is needed, and on the personal information they will contain. A 12-page white paper entitled Identity Cards The Next Steps provided the basics of the scheme and lays down how Blunkett wishes to introduce the use of identity cards. 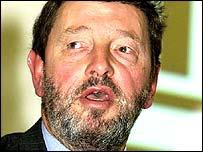 Firstly, the legislation will create a national identity register, developing more secure passports and driving licences using biometric technology. For those who do not have a driving licence or passport, a voluntary plain identity card will be issued. Mandatory biometric ID cards will be issued to the 4.5 million resident foreign nationals in the UK.

Compulsory cards will be introduced after the technology is seen to be working, when take-up exceeds 80% of the population, and the public accepts the idea. An important point to remember is that it will be compulsory to have the card, but not to carry it. It will only be necessary to produce a card when accessing public services such as the National Health Service, education and housing. As to what information will be contained on the card, it appears likely that biometric information will be stored on the final cards. It will be necessary for everybody will have to have an eye or fingerprint scan at the post office or local council office so that their "biometric" information can be stored on a microchip embedded in the card and on the national identity register.

However, such plans have caused great controversy, especially the claim that ID cards will help prevent terrorism. On April 27th 2004 a new report was published, which categorically stated that ID cards will have no effect on the threat of terrorism whatsoever. The human rights group Privacy International found that here was Almost no empirical research ... to clearly establish how identity tokens can be used as a means of preventing terrorism."

The group's director, Simon Davies, claimed: While a link between identity cards and anti-terrorism is frequently suggested, the connection appears to be largely intuitive. Moreover, the Israel-based International Policy Institute for Counter-terrorism has drawn up a list of the 25 countries that it assessed as having suffered most from terrorist attacks since 1986. Privacy International used the list to validate their argument. Eighty per cent of these countries have long-standing identity card systems, a third of which contain a biometric such as a fingerprint. While it is impossible to claim that terrorist incidents have been thwarted as a result of an ID card, the above data establishes that the cards are unable to eliminate terrorist incidents.[1]

Spain is one of those countries with a similar scheme, although these did not prevent the Madrid bombings. David Winnick, a British Member of Parliament, claims: "If the emphasis is now on terrorism, the fact remains that in Spain identity cards are compulsory from the age of 14 onwards.  In what way did that stop the massacre which occurred?  Whats more, Mohammed Atta, the leader of the 11 September hijackers, did not use multiple identities. Nor did the men suspected of the Madrid bombings. Their plans would not have been hindered by biometric identity cards.

Terrorism aside, there is still great concern from the British people what kind of personal information will be contained on the cards, why should the Government need it, and what on earth are they up to? One major concern is whether or not ones personal address will be shown on the card. One would expect that there is no need to have your address on the card, providing you have satisfied the Entitlement to reside or work in the UK criteria. Nevertheless, if plans to include your address on an ID card get the go ahead this could have serious consequences. Discrimination on the basis of race and religion still exists, and having to show where exactly you reside in a town (e.g. on the Shankill Road or on the Crumlin Road in Belfast areas of Protestant/Catholic conflict) whenever you show your card to someone seems incredulous.

Additionally, there is great debate about whether the ID card is just another tax imposed by the Government to get money into Chancellor Browns pockets. Public opinion polls clearly show that ID cards, if compulsory, should be free of charge. A "self financing" scheme would perhaps be appropriate for a voluntary system, although this is not what is being put forward. It appears as if it is a simple method of avoiding the Home Office and crossing into the Treasury's domain by proposing what is essentially another "Poll Tax". However, it must be maintained that although, in all possibilities, the card will need to be replaced ever five years or so (as the chip will wear), a citizen is not expected to pay for these replacements.

Nonetheless, ID cards may still have their place. As a major member of the European Union, it is perhaps old that the UK doesnt already have an ID card schemes as do 11 out of the 15 members (before May 2004 when ten new states joined), including Belgium, France and Spain. Useful information can be stored on them, for example in Belgium it is possible for a citizen blood group to be displayed on the card, a vital aid in medical emergencies and saves time trawling through medical records. Furthermore, European Union countries that do have an ID card scheme, it has been found that they are able to travel across the Union without a passport all that is needed is their ID card. This could lead to convenience to the traveller and prevent those last minute dashes home from the airport to find the lost passport. Whats more, there is a strong argument that, in a country where police are suffering from increasing bureaucracy and staff shortages, ID cards will save time. A simple scan of the card will reveal an individuals criminal record and lead to quicker arrests. Quite significantly, they will not have the right to demand the card unless a citizen is believed to be a suspect of a crime. However, this is still no guarantee that this still may not lead to further victimisation, especially among ethnic minorities. Research in Germany for example, suggests that police are more likely to demand a card from a person belonging to an ethnic minority, rather than any other citizen.

Autumn 2004 - Legislation introduced which will create the national ID scheme, including the national computer database register

In conclusion then, whether the Government listens to public opinion or not (which if it did it would be the first time) and whether the UK introduces a nationwide ID scheme or not, the fact that it will need to provide for 60 million people suggests that it will be a number of years before it becomes a reality. Trials of the technology have only just begun around four major cities of the UK - Newcastle, Glasgow, Leicester and London. The final cards are still years away as you can see so there is probably no need for the opposition to take to the streets just yet.