There are pets that come into your life and immediately win you over, and then there are the ones that slowly burrow their way into your heart like a worm defiling an apple. Foster the collie would fall into the latter of these categories.
By Chuck Scott
2008-04-22

Of course, he won my wife over right away, but she's a pushover for anything on four legs. You could bring a wild dingo into the house, turn it lose on a path of destruction, and her only comment would involve how cute he looked pissing on the drapes. But I'm a little more critical of animals that come to live with us; they have to meet certain standards. For one thing, I like them to be clean. God knows we have enough filth entering the house through conventional means, we certainly don't need an open sewer with fur traipsing his contribution into every nook and cranny. Secondly, I prefer my pets to be intelligent. They don't have to perform party tricks like holding a biscuit on their nose; they just need to exercise some level of common sense and stay out of the damn street. Thirdly, I like them to be attentive to my commands and instructions; every pack has an alpha male, and as the only one in the house with a job, I'd just as soon prefer that I carry that title. Needless to say, Foster the collie failed in each of these categories with flying colors.

Foster came to us through a collie rescue organization, which means he was rescued from someone who didn't want him. I feel the need to explain that, because I can't tell you how many people have asked me what kind of rescues he used to perform. Believe me, if you had to rely on Foster to rescue you, you'd better take your cyanide capsule now, because the little barrel of brandy isn't coming anytime soon. Foster's name was "Chad" in his former life as a show dog, but the breeder gave him up to the rescue, because he was "too soft for the ring". First off, I'm pretty sure that any previous usage of the phrases "Chad" and "former life" involved gay porn in some way or another. Secondly, any dog saddled with that moniker and a history of failure at 10-months of age should have raised a few red flags right out of the box, but you want to give a dog the benefit of the doubt, right?

If there was one redeeming quality about Foster, it was his looks. He was a handsome example of the breed, although I say this with the same inflection that a rich old coot might use to describe his pain-in-the ass, high maintenance trophy wife. I'm not sure what they did to Foster during his rigorous preparations for "the ring", but family life left him a little skittish at first. We couldn't walk around the block without him coming unhinged at the sight of a woman on roller blades or kids riding bikes. And don't even get me started on the skateboards; his trainer must have held his eyelids open while repeatedly showing him images of skateboarding violence being perpetrated on unsuspecting, pretty-boy canines named Chad. What he seemed to need was a little training, that's when I stepped up to the plate. Discipline, honor, integrity; these would be the hallmarks I would impart to this young, tri-colored disciple. 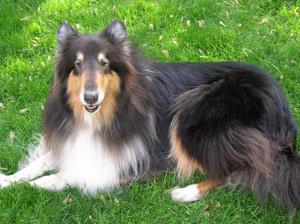 The Black, White and Brown Hou

I decided to emulate an order of monks that trained dogs in some remote California wilderness. They had written a book, and the tenants of their teachings seemed to mirror my own ambitious goals for this lowly grasshopper. I studied, we trained, we failed completely. These reclusive monks obviously hand-selected intelligent dogs that easily adapted to their methods, there was no other explanation, except for the highly unlikely possibility that I may have lacked the patience of these God-fearing miracle workers of the west. I decided that we should seek outside help, so we joined a structured obedience class at the local humane society.

There were about 6 other human/dog "teams" in the six-week training course. There were all manner of beasts; large, small, timid, aggressive, mutes, barkers, that first night was a real plethora of chaos and confusion. I spent most of the time trying to keep lady-killer from barking and spinning in circles, while catching only bits and pieces of the lecture. Every time the instructor demonstrated something, we had to get up and try to replicate his instructions. Our attempts were more like barnyard antics than any choreographed master/dog interactions. Foster was like a wild pony that had been lassoed on the Great Plains, and I the hapless city slicker yelling "Whoa there, big fella!" while he bucked and thrashed against my so-called authority, we were pathetic.

However, what we lacked in fundamental skill, we made up for with perseverance. Every night after work, I would come home and drill with him up and down the block. Six long weeks and two boxes of Snausages later, we were a team. Not in the mold of say a perfectly synced bob sled team, more like a quarterback throwing a wobbly pass to a limping receiver and somehow coming up with a touchdown. But it worked, we were no longer adversaries, we were brothers; brothers born via the womb of obedience and baptized in the fires of mutual respect and cooperation. Oh, what a striking image we must have cut to any and all passersby lucky enough to witness our fine leash control and sit/stay commands; peerless lords of the boulevards, I tell you.

And so we became constant companions. If I had a home project, he would be on "work detail" for the day. When I awoke in the morning it was his beady eyes and long snout that greeted me, and when I arrived home from work he'd be the first there to offer up his head for a welcome pat. When the clock rolled around to nine, we'd take a nightly constitutional through the neighborhood just to make sure all was right with our little corner of the universe, and barring the occasional skunk, it usually was. We watched each other acquire gray hair and stiff joints, in some ways we kind of grew old togetherwell, I grew middle-aged, he leap-froged me into old age. Through ten years, two kids, one move and a myriad of life's problems, victories and accomplishments, he was there to lend an ear (to be scratched), to offer support (your hand with his head) and to stand by you (usually so close you tripped over him when you turned around).

He was far from perfect. If left unattended, he had a penchant for raiding the kitchen garbage can. One day not long ago, I witnessed him backing into the living room like he was wounded or frightened, the source of his discomfort? While sticking his head in the can, he'd managed to get the lid lodged around his neck and couldn't figure out how to get it offidiot. He was also the sloppiest drinker I'd ever seen, and given some of my drinking companions, this is really saying something. He seemed to hold off on drinking until I was lying on the floor then he'd approach with a dripping mouth and shake his empty head until I looked like I'd run through a sprinklerbastard. His love of pancakes was so renowned, I coined the phrase, "Steal a pancake, get battered" in the vein of "Drive hammered, get nailed", just to threaten him. He'd hover around the stove when you cooked them, steal them right off the plate if he got half a chance and occasionally even snatch one right out of an unsuspecting toddler's handjackass.

Foster passed away this past week from problems stemming from a neurological disorder. And I can tell you for a fact that upright garbage cans, comfortable floor lounging and unmolested pancakes are highly overrated. There's a line in a Springsteen ode to a lost friend that goes, "They say you can't take it with you, but I think that they're wrong/Because when I woke up this morning, something big was gone", that about says it all. There will be other dogs, but there will only be one with a single whisker comically bent skyward. Only one who defecates while walking to create the largest mess possible. Only one who routinely bangs his snout on things, because he doesn't realize how big it is. He will be remembered for all these things and more, but mostly because he was a good dog, and that's about all he ever wanted to bedogspeed, Foster, dogspeed.