Oz Journals I - My New Home

Tom Nicholson
2005-04-17
comments
I am still waking up at about four in the morning, as if an internal
alarm clock has been set for that hour to jar me into consciousness. I
silently slip out from under the bedsheets, so as not to disturb my
wife, and I walk to the other end of the apartment and go out onto our
balcony and gaze off into the distance, until my eyes get used to the
hour and the light, and I realize that I am not dreaming when I see the
lights twinkling in the near distance on Rottnest Island. I hear the
Indian Ocean's waves pounding onto the sand of Scarborough Beach in
their steady but uneven rhythm and I am aware of a broad smile creasing
my face. I smile because I know that although I have not yet plunged
headlong into those crashing waves and felt the salt water on my skin,
I can do so at my leisure. The ocean is constant. It will always be
there. It is not going anywhere, and for the next six months at least,
neither am I. I smile because the ocean will wait for me and welcome me
when I am ready. I smile because I am in my new home. I smile because I
am a very lucky man.

My new home is on the Esplanade right on
the beach in Scarborough, a suburb of Perth in Western Australia. The
apartment building we are in contains units 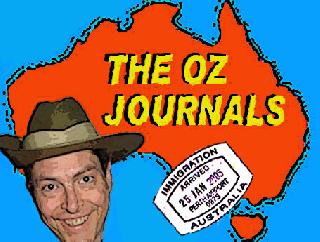 which are more or less luxury suites for individuals who wish to enjoy
the proximity of the beach and its charms and can afford an efficiency
suite for a week or two every summer to surf, swim and, if so inclined,
build sandcastles. To the right, outside of the lobby, the Esplanade
will lead one to Observation City, a high-rise luxury hotel built by
the same bloke who first won the America's Cup in yachting, much to the
consternation of the Yanks. He built the hotel, which at the time bore
his name, much to the consternation of the locals here, who didn't much
fancy the idea of a tall building ruining the esoteric beauty of their
white sandy shoreline. Later, he bilked money from investors in
subsequent ventures and was sent to jail, after claiming he had no
money to pay the investors back. His property and possessions were
seized and sold off, including Observation City and a painting he had
acquired by a fellow named Vincent VanGogh called "Irises".

I
mention these facts because at one time or another, all of us have had
cause to change our addresses and leave behind some of our cherished
belongings. The shortest move I ever made in my life was moving from
apartment 714 to apartment 713 within the same building in the east end
of Toronto. That was surprisingly tough, because, although I was merely
moving down the hall from a one-bedroom apartment into a three-bedroom
apartment, there seemed to be less room in the new place for my stuff.
Life is funny like that. The very wise comedian George Carlin once
described the human existence as one prolonged move, with every being
on this planet moving hither and yon, from pillar to post, searching
for better places to store their "stuff".

We are a very
materialistic species of animal, we humans. You don't see animals doing
the things that we do. Can you picture Chimpanzees and Orangutans
carting their stuff around the jungle in cardboard boxes, in search of
treetops with better views? Gorillas seem loathe to head further on up
the mountainside, even though poachers shoot them by the score in order
to cut their hands off so that they may be used as ashtrays. It is
quite possible that they do, but most probably they do it at night, to
avoid the landlord and paying the last month's rent, in what my Uncle
Willy used to refer to as "doing a moonlight walk". I have yet to see a
National Geographic Special on television about such simian migration.
But we humans do it almost as if it is a necessary part of our growth.
And we very much love to acquire things; to carry our possessions with
us when we move on. We are rather like magpies collecting foil and
shiny items, taking them back to our nests until our nests can no
longer accommodate our prizes and then flying onward to a larger nest.
And for what?

At the end of the day, all we human beings really
need in this life is our health. That and maybe a big screen
television. Well, it is just a little past the lunch hour of my life
and my health is already shot to hell. So I took a big step and made a
move, not to the next apartment but all the way around the planet. If,
as they say, the shortest distance between two points is a straight
line, then let me tell you right here and now that the longest distance
between two points is the journey from Toronto, Canada to Perth,
Australia. It took thirty hours of flying, and for the next three days,
it felt like I was still in motion, even if I was sitting down to eat
dinner. Also, I had no feeling in my ass for nearly a week. Was it
worth it? You bet your numb butt it was! Because I am now residing in a
beautiful place, one where most people save for a year to spend just a
week's vacation.

Originally, this continent was a penal
colony. They seriously sent convicts from prisons in Britain down here
as a punishment! Yeah, right. I will concede that the ocean voyage
would have been extremely uncomfortable, what with the poor convicts
all shackled together at the wrists and ankles on the choppy seas,
imagining all sorts of horrifying things at the end of the journey.
Perhaps thinking their new residence would be a harsh, cold and
abominable land rife with carnivorous beasties and head-hunting
cannibals. And then, finally arriving here, getting read the riot act
on the beach by the ship's captain, while doing their absolute best to
pretend that it sucks and that they will not enjoy the sunshine and sea
at all and trying REALLY hard not to grin from ear to ear as the
captain turns around to sail back to rainy, miserable, disease-ridden
London.

I just find it ludicrous that anyone could ever
consider sending people here as a punishment. I mean, it's like a judge
banging his gavel and handing the Manson family a life sentence at the
Club Med of their choice. Of course, it is not perfect here. There
actually ARE carnivorous beasties here, among them giant sharks and
crocodiles. There are tiny little spiders that a mere bite from will
put a serious dent in your plans to walk normally again for the rest of
your life. There are miniscule parasites that can apparently get under
your flesh and slowly eat you from the inside out, like a busload of
Chinese tourists chowing down at the all-day, all-you-can eat buffet at
the Mandarin restaurant, until all that is left of you is a pair of
loafers and a Timex wristwatch in the middle of the living room carpet.

People
talk funny down here too, and though they claim it is English, I can't
help but feel they might be mocking me in some way. And everyone smiles
all the time. Given where I come from, that is reason enough to suspect
something sinister. Perhaps they are all on drugs? Mentally unbalanced?
But the worst part of it all is that I miss my family and friends. But
I have made a vow to myself that I will do my utmost NOT to dwell on
the STUFF I left behind, and miss that. That stuff is from my THEN, and
I am firmly entrenched here in my NOW. The stuff I left behind after
forty years of collecting is from my old life.

It shouldn't be
too difficult to keep my personal promise to myself. I am strong. I
have willpower. As Robert DeNiro's character in the Michael Mann film
Heat' says to Val Kilmer's character:

"Do not allow yourself to
become attached to anyone or anything that you cannot walk away from in
45 seconds flat if you feel the heat around the corner."

Of
course, Robert DeNiro gets shot at the end of that film and dies, so
you can take those words of wisdom with a few grains of salt and a gulp
of Tequila. If you haven't seen the movie, I apologize for ruining the
ending, but maybe you ought to think about getting out more. Get your
ass off the couch for heaven's sake, and go and rent the video.

All
of this brings me to plan B', which is a rather simple plan, but quite
brilliant despite itself. Plan B' goes like this: My wife and I will
eventually be moving into a larger living space in order to fill it
with the brand new stuff that we have already begun to accumulate. Life
goes on.