Eight of the best Argentinians to play in the Premier League

Take Argentina for example. The South American nation have produced some of the best football players the world has ever seen, let alone the Premier League. With that in mind, we take a look through eight of the best Argentinians to play in England's top flight.

Tottenham Hotspur have had their fair-share of successful foreign stars, and Erik Lamela has really made an impression for the north Londoners over the past two seasons. The winger initially struggled to make an impact at White Hart Lane when he joined in 2013, but he has won over the Spurs fans with his impressive displays and consistent performances. To date, Lamela has 14 Premier League goals in 120 appearances and has recorded 26 assists.

Even though Julian Speroni has made only 92 Premier League appearances, the Crystal Palace goalkeeper has been a constant performer in south London. Signed from Dundee in 2004, Speroni quickly established himself as a fan favourite at Selhurst Park and has gone on to earn legendary status. In 2015, Palace rewarded Speroni for his loyalty with a testimonial against Dundee.

His best years might be behind him now, but Pablo Zabaleta is arguably the best Argentinian defender to ply his trade in the Premier League. The right-back spent nine years at Manchester City and was renowned for his no-nonsense approach and committed displays. Zabaleta won two league titles in his time at City, alongside two League Cups and an FA Cup. He currently plays for West Ham United.

Back in his day, Carlos Tevez was one of the most feared strikers in world football. The explosive hitman served West Ham, Manchester United and Manchester City during his seven-year stint in the Premier League. In 2007, his goals saved the Hammers from the drop and he went on to win the Champions League and two league titles with the Red Devils and then a third with City in 2012. 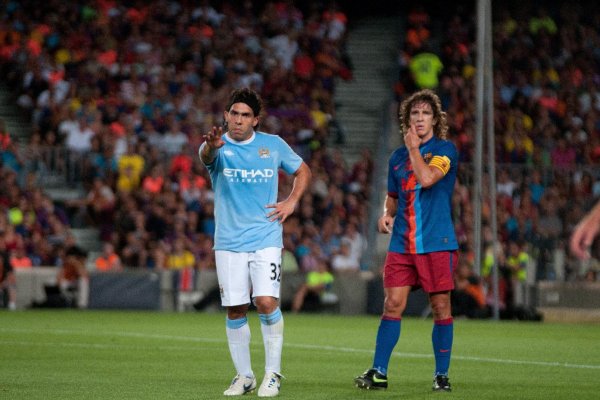 Many of the plaudits for Leicester City's surprise title win in 2016 were directed at the likes of N'Golo Kante, Jamie Vardy and Kasper Schmeichel; but back-up striker Leonardo Ulloa was vital to the Foxes success three years ago. His goal record isn't something to brag about, but it was the importance of Ulloa's strikes that see him enter this list. On the way to the title, Leicester were 2-1 down at home to West Ham and a late, late Ulloa equaliser effectively kept Claudio Ranieri's side on course for the Premier League crown.

Easily the finest Argentinian star to grace the Premier League, Sergio Aguero has demonstrated his world-class talent year after year. The Man City forward has scored 153 goals in 223 appearances since signing in 2011, including the winner against Queens Park Rangers on the last day of the 2011/12 season which meant City won their first ever Premier League title. Even at the age of 30, Aguero appears to be showing no signs of slowing and he'll remain central to manager Pep Guardiola's plans for the foreseeable future. Expect him to feature in City's next Premier League game against Burnley, where Betfair have all the latest markets and prices.

Defensive midfielder come centre-back Javier Mascherano raised eyebrows when he signed for West Ham in 2006, making just seven appearances for the Hammers in the first half of the season. However, a move to Liverpool followed in January 2007, and Mascherano built up a formidable partnership with Xabi Alonso and Steven Gerrard. Then Reds boss Rafael Benitez described Mascherano as a: "Monster of a player."

Prior to Leicester's amazing title win in 2016, the Foxes nearly dropped out of the Premier League the season previous. The 2014/15 campaign is often seen as the catalyst for the East Midlanders surprise win, but the driving force behind their survival was midfield enforcer Esteban Cambiasso. The tough-tackling former Inter Milan star was truly pivotal in Leicester's amazing turnaround in form, helping the club win seven of their last nine games to finish 14th.