Kiiking - a second between heaven and earth 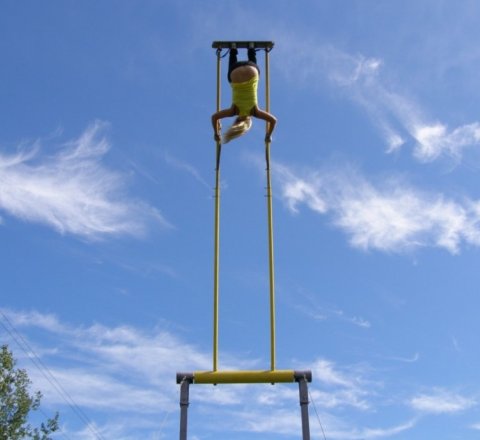 Kiiking is an extreme sport that started off in Estonia in 1997. It's a sport based on simple swinging, but it provides a lot more to both the spectator and the swinger. The swinger stands on a trapeze-like swing and tries to swing over the top bar. The swing can be lengthened to make swinging over the cross bar as
difficult as possible. Currently the highest swing that people have really been able to take over the cross bar, is 7m and 1cm. Women's record is 5.91.

After talking to Ado Kosk, the inventor of this weird sport, it turned out that Kiiking is actually nothing new for the crazy Estonians. Allegedly the first sport picture in Estonia was painted already in the beginning of the 19th century, and this was a picture about a guy swinging with a wooden swing over the top bar.

However, Kiiking in its current form started in 1997, but since then much has hanged. The swings are now made of metal and more attention is being paid to the safety issues of the sport. The swinger's hands and feet are tied in order to prevent him from getting injured.

Currently this is really an Estonian sport. At the same time also foreign people have tried it out here, but the results haven't been too impressive. Estonians themselves have managed to get listed in the Guiness book of records with the result of 7.01. Finnish record is 5.01, France 4.0, Italy 4.50, USA 5.31, Latvia 4.41. So there's still lots of room for improvement in every side of the sport.

Due to the young age of kiiking and increasingly more competitors, the kiiking results are constantly improving and when also other nations join us, to what great heights young and strong people can take the results. (www.kiiking.ee)

Ado Kosk definitely encourages everyone to have a look and try it out. The Kiiking swing prices start at about 1500 EUROs and the Estonian Kiiking Federation has just gotten ready with 25 new swings and most likely all of them will be sold abroad to popularize the sport all over the world.

Profile of an ideal swinger? It came out that ideal swinger weighs 75-85kg and that's it. The length of a person doesn't really matter according to the inventor. It takes strength and lots of stamina to actually make good results with swinging. Plus you need to have good technics. One can pump for hours and eventually accomplish nothing but a red face, Ado Kosk added.

What might the future of Kiiking bring? No one knows, but to grow it needs more publicity in foreign countries. Estonia with just 1.3mln people is not a big enough audience for a sport like that. It needs to grow and to do that it really needs to go across the borders. The current world record is 7m and 1cm. However, in the opinion of the inventor the records could easily go up to 9m and even more. Maybe one day it will be an area for olymics, Who knows?

It is a sport for the true adrenaline enthusiasts who respect the extreme sides of life..Imagine yourself 12 meters high, your eyes staring at the top bar of the swing from above. You have just stopped in that position for couple of seconds and you're about to swing down again any second. Now feel it. It's truly amazing!

Note: This article initially appeared here a few years back.