Snowboarding for the first time

Have you ever done something with a snowboard? Maybe just turned a somersault with it down the hill or something similar. If you havent, youve missed something really great. And its time to fix this mistake! You wont regret it.
By Siim Einfeldt
2015-01-17

Have you ever done something with a snowboard? Maybe just turned a somersault with it down the hill or something similar. If you haven't, you've missed something really great. And it's time to fix this mistake! You won't regret it. 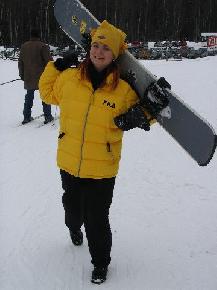 Unless you brake an arm or leg or something similar, of course. But that's fun, don't you agree? I went snowboarding for the first time about a week ago. Now I'm alive again. But this experience was really worth every step of the way. And even though one local oracle predicted that before the end of the day I would end up in the emergency room, everything went fine.

I guess the shopkeeper of the shop where we rented our equipment didn't think we'd come out of it alive either. A friend of mine asked him how to put on his shoes for mountain skies. I had no idea how to attach my shoes to the snowboard. Professionals like we were and all

And after we had rented the equipment, it looked as we had just found a perfect day for the first-time snowboarding and mountain skiing. Not everyone can find a day with a snowstorm, especially if you only have a few such days during a winter.

Oh well, bad luck, or "shit happiness" like one of my superior in the army said to a friend of mine when it looked as if everything shit happens only to him. 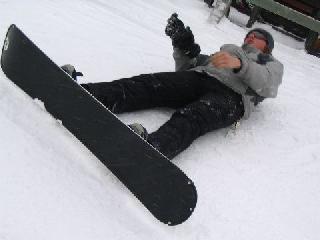 After we were ready to go, we looked at each other, and everyone's eyes were saying "Wtf am I doing here? I don't want to die". Snowboarding looks much easier on television and  when others do it. I spent 80% of the time on my stomach, the other 20 on my back. Doing it like the pros do didn't really come out too good. For me the hardest part was turning and breaking  so generally speaking, snowboarding. As we didn't really have any pro's around to teach us this great sport. And as for me  I didn't want it either, I enjoy falling and crashing and laying andlearning all by myself. 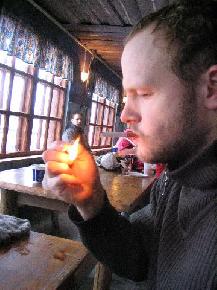 During the 5 hours were were playing snowboarders we went inside to drink something  coffee, jägermeister, bacardi - at least 5 times...just to rest a bit. I wouldn't have thought snowboarding could tire somebody out that easily. But then again, considering the amount of sports I do every day, it's normal. As I usually don't do any, shame on me.

Later that day I started to feel the aching in every part of my body, especially in my buttock and knees. In some reason also the muscles in my neck were hurting, not to mention my fingers. And so for the next few days. I guess it's not good to slide down the hill on your stomach for 20m in a row.

One way or another, I would definitely suggest everyone to try this sport out. 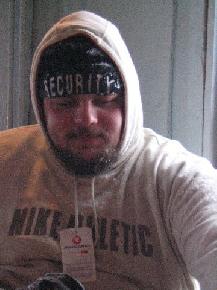