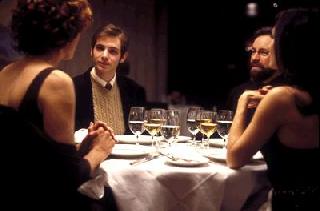 "Tadpole"
is the indie filmmaking dream come true. Shot entirely on digital video
in just two weeks for a cost of just $150,000, director Gary Winick
took "Tadpole" to Sundance in 2002 and came home with not only the
Director's Award but also a $5 million distribution deal from the
mighty Miramax. As with all Sundance success stories the hype produced
high expectations, which were not entirely met at the box office, the
film taking about $3 million.

The titular Tadpole is the
nickname of a 15 year old Voltaire quoting, French speaking prep
student named Oscar Grubman, played here by newcomer Aaron Stretford.
Oscar returns to New York for Thanksgiving with one thing on his mind:
older women. He harbours a passionate but inappropriate longing for
Eve, his 40 year old mother in law played by the imperious Sigourney
Weaver. Having Weaver in his film is a coup for Winick. She brings star
power (which is useful for posters) but, even better, she doesn't wield
it. Her performance as a woman very quietly on the verge of a midlife
crisis is nicely restrained, and generous enough to allow the other
actors to shine. John Ritter plays her husband with a charming naivety,
while Stretford has enough charm to make Tadpole likeable, even when
he's being overbearingly intellectual. 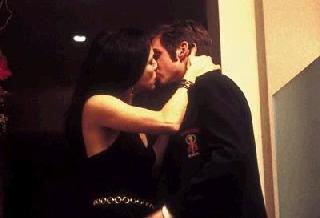 Despite
playing a supporting role, Bebe Neurith doesn't just steal her scenes,
she takes the entire movie, drops it in her pocket and takes it home
with her. Playing Diane, the 40-year-old friend of the family with whom
Oscar shares an ill-advised (and ever so slightly illegal) night of
drunken passion. You may remember Neurith as Frasier's snow queen wife
Lilith in both "Cheers" and "Frasier", but there's none of Lilith's icy
logic here, Diane positively embracing the idea of a passionate affair
with a much (much) younger man. When Tadpole asks her to keep their
affair secret she challenges him "Would it matter? You're a grown up."
After a perfectly timed pull on her cigarette she adds, "or close
enough." I guarantee that if you remember one thing from this film, it
will be Bebe Neurith's dirty smile as she introduces Oscar to her
gaggle of appreciative friends.

At just 77 minutes "Tadpole"
never threatens to outstay its welcome. Possessing an unforced charm,
Winick sagely avoids going for big laughs. For example, after
discovering Eve used to have a thing for Elvis' sideburns the facial
hair free Oscar takes advantage of a friend's dog, but there's no
gross-out dog-shaving scene, and the resultant artificial facial hair
is pleasantly convincing, as opposed to the lamb chop sized
monstrosities that would have grabbed a few cheap laughs. Winick seems
to understand that just knowing where these sideburns came from
produces laughter of a subtler, gentler variety.

Of course,
this tale of the young boy falling hard for the older woman is not
without precedent. It's already been done ("The Graduate") and redone
("Rushmore") very successfully. "Tadpole" at least has the good grace
to acknowledge it's ancestry, possibly to pre-empt criticism. When
Oscar and Diane's tryst is revealed over dinner, Oscar's dad can only
say "Well, this is all very "The Graduate", to which Sigourney Weaver
responds "Except Oscar hasn't graduated yet."

The only real
complaint is technical. "Tadpole" highlights the shortcomings of
digital filmmaking, with noticeably faded colours and some really
grainy sequences that say home video'. The rule is that film ALWAYS
looks better, despite what anyone might say about the digital
revolution. Despite these shortcomings, "Tadpole's" smart humour earns
it the right to swim with the big fish.