Scorsese on autopilot with 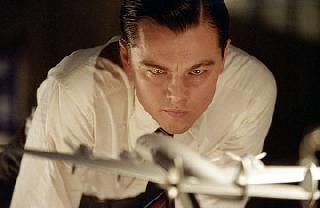 Howard
Hughes packed a lot into his 71 years. The American icon achieved fame
in two of America's glamour industries, both filmmaking and aviation.
His "Hells Angels" was the most expensive movie ever made, and for a
time he was the fastest man on earth. A serial bedder of Hollywood
starlets, he counted Ava Gardner, Katherine Hepburn and Jean Harlow
among his conquests. He was a charismatic entrepreneur (the inventor of
the push up bra no less) but also a neurotic obsessive compulsive
hypochondriac who finally died in 1976 as a bona fide long-nailed,
Kleenex-boxes-for-shoes mentalist. This makes him ideal subject matter
for a $100 million biopic, but in hindsight, condensing this most
remarkable of American lives into a motion picture of watchable length
is like tackling an impossible math problem.

For his biopic, The
Aviator, Martin Scorsese has chosen to focus on Hughes' glory days,
from the 1920's when Hughes inherits his fathers fortune and begins
filming of his epic Hell's Angels to the 1940's when Hughes
triumphantly takes off in his infamous Spruce Goose, the gargantuan
flying boat they said would never leave the ground. Scorsese has
carefully recreated this golden period, but as with Gangs Of New York
the pallet is far too bright, the intense Technicolor seems to say
Wizard of Oz when it wants to be saying Citizen Kane. As with two other
great biopics about flawed heroes - Schindler's List and Scorsese's own
Raging Bull - The Aviator would have benefited from being black and
white.

For his Hughes, Scorsese has chosen his actor du jour,
Leonardo DiCaprio. DiCaprio is now 30 years old, but is still cursed by
the youthful good looks that sold so many Titanic tickets. Despite
this, he does a respectable job of suggesting Hughes' psychological
problems. Ill mental health is an invitation less scrupulous actors
would have taken to ham it up, but DiCaprio smartly keeps it all in,
painting a picture of a man trying to stay in control.

The
bigger problem is that even with a running time that threatens three
hours, Scorsese still struggles to cram everything in, and the decision
to highlight key spectacles (CGI planes taking off CGI / CGI planes
crashing) must have added millions to the films budget. Even worse, it
took away time that could have been better spent examining Hughes'
relationships with other characters, all of whom have been relegated to
not much more than extended cameos. It's not a question of DiCaprio's
character lacking depth, but that those around him aren't given enough
time to develop into anything more than caricatures, leaving DiCaprio
with nothing to bounce off. Cate Blanchett's portrayal of Katherine
Hepburn for example, is more imitation than acting, all deliberate
quirkiness and unconvincing expressions ("Hot Dawg!"), while the
supremely talented John C. Reilly has to settle for the role of comic
sidekick, reduced to a series of flustered headshakes playing Noah
Dietrich, the man responsible for Hughes' finances.

There are
some human moments when The Aviator really takes off. Hughes'
self-imposed isolation is captured in one stunning shot that widens out
to reveal a long row of milk bottles that Hughes has filled with urine.
The later scenes where Hughes leaves this home-made prison and briefly
overcomes his neuroses to put in an impressive showing and claim
victory in a congressional hearing that has accused him of being a war
profiteer is triumphantly uplifting. But these moments only hint at the
film this could have been. This huge production creates an abundance of
eye candy rather than character study.

Too often this is a
biopic by numbers, with Scorsese on autopilot. The focus on the
spectacles, dazzling though they are, gives The Aviator an episodic
feel that will be unfamiliar to those who know Scorsese's work, and it
could be that he has succumbed to the pressure for his film to make big
money. Miramax head honcho Harvey Weinstein will do the math and be
happy: Film star (DiCaprio) plus spectacle (plane crashes) equals
blockbuster - which equals money, money, money! In the end, Scorsese
will know he can do better.