A Star for Mitzi!

I hereby nominate Ms. Mitzi Shore, solo maestro of the world famous Comedy Store in Los Angeles, for a well deserved star on the Hollywood Walk of Fame. Who's with me?

A star for Mitzi Shore! Now, why climb that insurmountable mountain? Simply because, it's not there! Why would a guy try to do what cannot be done? Some might say that it's in the challenge; others might say that man knows something others don't. More could say that its fierce determination, even others might say this man is just crazy! Those motives are all fine and dandy, but, for me, there's only one overwhelming reason: Because, it's the right thing to do! (And ironically, she'll never know.)

Now, you calmer readers, I'm not just some reckless do-gooder, gallivanting around Hollywood, trying to spoil some unsuspecting folks' sad times with a kind deed. Nah, that's not me. But, this one last thingI feel compelled to set straight. This is personal. (Hey, let's be realistic: This is damn near impossible!) 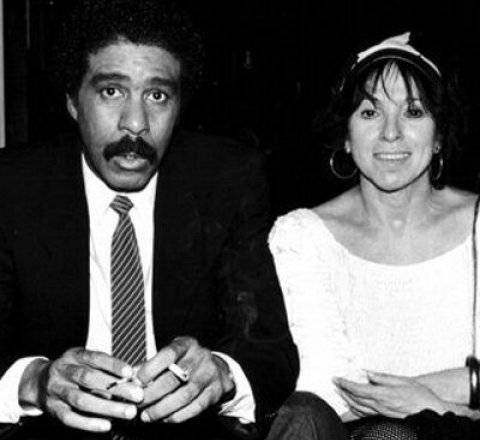 Mitzi Shore's many accomplishments should reasonably qualify her for the star. She owned, managed, and guided all of the Comedy Stores (5) for almost forty years, including arguably the first 3-act stand-up comedy club in the world. If a comic didn't win her support, then they just sulked off and went elsewhere. To say Mitzi was "hands on" about her chosen acts is to put it lightly! (Insert your own joke here.) Her alumni include the likes of David Letterman, Robin Williams, Richard Pryor, Jim Carey, Michael Keaton, Andy Kaufman, Roseanne Barr, Andy "Dice" Clay, Gary Shandling, Andy Garcia, and the real Gallagher. We shouldn't forget Richard Lewis, Rodney Dangerfield, Gary Muledeer, Steve Landesburg, George Miller, Mike (a major film director!) Binder, Sam Kinnison, Kevin Nealon, Robert Townsend, Jimmy Walker, Jeff Altman, Johnny Witherspoon, Marsha Warfield, Paul Rodriguez, Jaime Foxx, more Wayans brothers than you can shake a stick at, and many, many more! 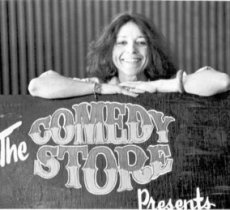 By the way, if you think L.A.'s Sunset Strip is an easy place to conduct show biz, then visit and judge for yourself. Just ask Dave Letterman how vital to his career Mitzi and The Store were. (Mitzi convinced him not to quit and go home several times.) Before the world bowed at his feet, Robin Williams used to sleep on her office couch. Richard Pryor steadfastly depended on Mitzi's stages to work on the jokes for his incredible stand-up movies. Ask Paul Mooney! Michael Keaton would become the first movie Batman. Jim Carey squired Linda Ronstadt to Mitzi's showrooms to show off his crazy and vaunted uniqueness. Gary Shandling, just a short time after being sent to the showers, came back to amazingly funny heights. Andy "Dice" Clay should clean Mitzi's gutters until he dies, to pay back her for her unending help to his career. (Hey, Silverstein, remember when we lived in her mansion-like flophouse for wayward stand-ups?) Many of the stories behind her alumni's successes reveal her huge heart, hidden as it was, underneath her fortress-like public image. She was a Tiger-Mom for her comics many decades before the public heard the phrase.

Mitzi's graduates made more TV appearances than there are people in Malibu. (Letterman's 6000+ set the TV record. Robin and Jim Carey movies made mega-millions! Jim Varney made seven "Ernst" flicks! Andy Garcia did the "Godfather" series after appearing in Mitzi's Main room.) Three Oscars, dozens of Emmys, four Grammys, and a double handful of Golden Globes! Not bad for a tiny little nightclub, huh? What some critics and authors have called the "Golden Age" of stand-up comedy on the west coast, probably wouldn't have ever happened without The Comedy Store and Mitzi Shore providing access, opportunity, a staircase to TV, and her blessings for her handpicked and soon-to-be famous.

Now, I don't want to get all "Driving Miss Daisy" on ya, but as a stand-up, if Mitzi and The Comedy Store happened to have assisted you in your stand-up career, then it's time for you to reciprocate that good turn, and help her. While I'm awaiting help from past Comedy Store graduates on getting Mitzi her star, I won't shame them here. But, if they won't acknowledge receiving Mitzi's support, I'll go to the mass media and tell the truth on all those ungrateful bastards! Letterman: remember that apartment at 8400 Sunset Blvd. that I inherited from you? Those toothpaste globs!! I have video! Now, you wouldn't want me to talk about that, would you? (Dave, how about a little help here?)

Now, there's a matter of fees to pay for Mitzi's star ($30,000+) and its official placement on Hollywood Blvd. Maybe we could do a telethon! Maybe call Whoopi Goldberg. Maybe roast Will Ferrell. Don't do an insult banquet; Set him on fire and actually roast Will Ferrell! Please?

There, I've laid out my simple plans. But, I've saved the best pitch for my closer. Since her youngest son's Showtime special: "Pauly Stands Alone!" revealed her current medical condition, it's safe to say: Dementia is a real Bitch! With her massive memory loss, Mitzi won't ever know what her admirers are doing for her. Sad, but true. This isn't a matter of repayment; it's a last recognition for her vision and successes. Join her children: Sandy, Peter, Pauly, and Comedy Store comics to help get a star for Mitzi! This is my impossible dream.

Because I'm so old, I don't selfie, link, face, or twat. So, if you want to help, please call or e-mail Pauly Shore at The Comedy Store. Tell him you want a star for his Mom on Hollywood's Walk of Fame. And, Mitzi will never, ever know! But we will