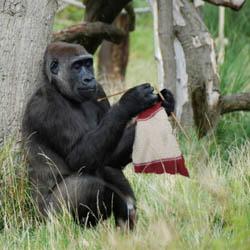 Not to be confused with Gorilla Knitting, although that is equally as bizarre.

It all started back in 2005, by two women, graffiti tagging the Houston metropolitan area due to an all to common frustration that often arises out of the projects.
"
Some have suggested that hallucinogenic drugs are a major motivator of this gang, but others suggest they are simply just high on life.
OG members AKrylik and PolyCotN, armed only with sharp puncturing objects and double bladed weapons, took their growing angst to the streets in a typical gangland fashion. After finding others like them who were becoming frustrated with the conditions of their inner city, the gang quickly grew to eleven members. Then like any other gang, they got organized and developed some street cred which was followed by a rapid swelling of their numbers. The unpredictable gang then started spreading to other cities with chapters in places like Seattle, Philadelphia, New Jersey, New York and Los Angeles. Today they are being internationally represented in France, China, Australia, England, Canada, El Salvador, Scotland, Scandinavia, Japan, South Africa and many other countries. You might not think you care, because urban gang land is not part of your reality, but lately they have even begun infiltrating college campuses everywhere and your college is certainly no safe haven. 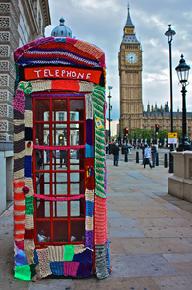 The only phonebox cosy that is also a calling card.
Representing an obvious tie to urban hip-hop society, they use monikers like Knotorious N.I.T., SonOfaStitch and P-Knitty, leaving tags on their work with phrases like "knitta please" or "whaddup knitta?" Like most gangs, bred out of frustration with the projects, their goal is a common one, mainly just struggling to survive while living in the cold harsh urban environment. Everyone, regardless of race, creed, color or gender, desires urban beautification, but as so often is the case in gangs, things can rapidly get out of hand fast. What starts out as simple expression often turns into a disturbing obsession demonstrated by some of the less guided members of the gang. I mean honestly, just how ugly could that tree have been in the first place? Knitta Please!! 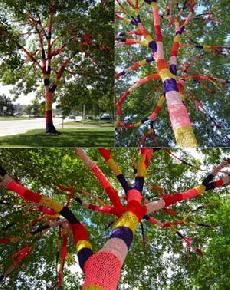 Global warming isn't a myth! Here's the proof!
Some have suggested that hallucinogenic drugs are a major motivator of this gang, but others suggest they are simply just high on life. It has been confirmed that a popular gang signature involves hanging knit-covered sneakers over aerial telephone cables. However, no real evidence has been uncovered indicating any illegal trafficking, other than the keeping of traffic signs warm. If drug use is at the root of all this unusual behavior, experts are convinced that needles are most certainly the main delivery method of choice. Despite leaving a very warm trail wherever the gang goes, authorities don't seem to know what to make of it, or out of it for that matter. Regardless, the group continues to taunt the authorities by flaunting their handy work not only in plain view, but also on popular photo sharing websites like flickr. In tracking them and their crafty nature, it is becoming rapidly clear that their numbers seem to be getting bigger and bigger.
(http://www.flickr.com/groups/guerilla-knitting/)


"
Homeless people have begun speaking out against the "Midnight Knitters" claiming that it is an insult to keep a lamp post warm when they are freezing to death on the streets. 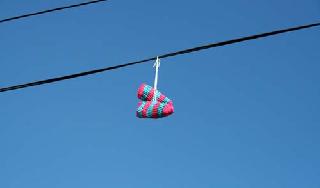 It is confirmed that the perps definitely are needle users.
Many have spoken out and chastised the gangs as misguided in their efforts and wonder why they don't use their time and energy for more useful community oriented goals. For instance, homeless people have begun speaking out against the "Midnight Knitters" claiming that it is an insult to keep a lamp post warm when they are freezing to death on the streets. One transient man was quoted saying, "I wake up cold as shit every mornin' and these bitches are out here knitting sweaters onto a freakin tree branch, while I'm freezin' my ass off! Where's the mother fuckin' cozy for MY wood in the mornin' damn it?! They be thinkin' they all haaaarrd and shit, ain't nobody be harder than a frozen ass bum with mother fuckin' stiffy!" 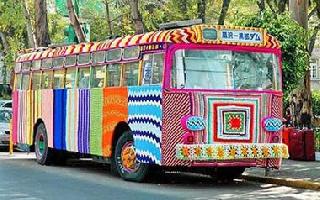 Illegit Knit Transit. It will leave you in stitches.
Other more reputable community members have claimed that what is being labeled as "a method of beautifying public space" is nothing more than graffiti and vandalism, especially when seen on such structures as the Notre Dame Cathedral and the Great Wall of China. Whether you deem it to be harmless art, criminal behavior, or simply the cutest gang ever, one thing is for certain, if you continue to ignore this new gang, which is adorably and blatantly staring you in the face, then you are definitely a Knit Wit. The world is slowly becoming a little more cozy whether you like it or knot!