There is a lot of concern these days about the increasing level of violence in our society.  Some people blame aberrant behavior on video games.  At the same time, many people would agree that breaking the cycle of violence starts in the home.

And, while you're at it, you should probably put a cable block on Animal Planet and all National Geographic nature specials.

There's more violence in a half hour of Animal Planet's Most Extreme series than there is in a whole afternoon of Grand Theft Auto.

Personally, I find the sex in Grand Theft Auto is way more gratifying to watch, too.

If your kid is so easily influenced that by playing a video game that you think he'll grow up to be mackin' and pimpin' down in Times Square in New York City, then you should get him a video game that trains him to become a doctor.

Then he can grow up to be a plastic surgeon and be mackin' and pimpin' in . 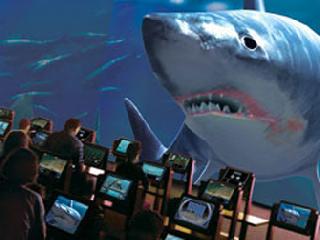 As usual, the truth is in the statistics.  Homicides among 18-24 year olds have been declining steadily since the introduction of the first Sony Playstation in early 1990s.

Meanwhile, shark attacks at our nation's beaches have increased every year since 2000 - the same year that The Discovery Channel started airing Shark Week.

Draw your own conclusions.

The problem here is obvious: there is a whole generation of impressionable sharks that are being taught that violence is the only way to resolve territorial conflicts with surfers.

What to do about this dilemma? There are almost as many schools of thought as there are schools of killer sharks cruising the coastline of the

Some people favor a get-tough approach. The most common suggestion from this group is a curfew. They want to pass a law that says that after 9:00PM all sharks under the age of 18 should be required to go back to the coral reef where they live. Or else risk fines and imprisonment. Let's see how you like being on the inside of that shark-proof cage, Mr. Hammerhead.

A few religious groups have preached a strategy of non-violence, urging their members to lock arms and go limp at the first sign of a shark attack.  This strategy has become less popular as increasing numbers of the faithful have turned up missing.

In the end, it is only through education and providing alternatives to violence that we can hope to stop the rising tide of mindless shark attacks.

Sharks need to know that we care about them and their future; which is why I urge you to support local government's plan to build two or more community centers for sharks in the next five years.

This initiative will give sharks a safe haven in a violent ocean. It will give them a place they can call their own.

Most importantly, it will give them a place where they can be mentored and play pick-up basketball.

There's even talk of installing some video games. Just to keep them occupied.