As we edge closer to springtime (and a new concert season), it seems only fitting we take the time to look back on last year's creaky concert tours. Can you remember a time when more acts with one foot in the grave were touring?

Last year The Who, Tom Petty, the Rolling Stones, Bob Dylan, Jerry Lee Lewis, Rod Stewart, Chuck Berry and Billy Joel all hit the road with the left blinker on the tour bus flashing for miles at a time.

Every other week it seemed like there was an article on MSN about a rock band that "is still rocking" thirty or forty years after they first hit the music scene.

Hey, I'm still riding a bike nearly thirty years after I first took off training wheels but no one's writing a breathless online review of my cycling skills.

Sure, Jerry Lee Lewis is still rocking at age 71, but it's probably just because he's got Parkinson's.
[ 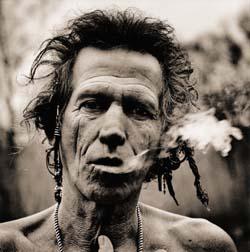 Coming soon to a wax museum near you
]
Why is a rock band that's "still rocking" news? What did you think they were going to do, join corporate and rise through the ranks to become the board of directors at Wal-Mart?

It's not like being in a rock band develops a lot of transferable job skills. Okay, maybe politics where you only work for part of the year and spend time sleeping with groupies ...but other than that, it's hard to imagine Keith Richards doing real well on a job interview with the personnel lady in the Ann Taylor suit.

Still, there seems to be a huge demand for reviews of "classic rock" tours, so in case you're wondering how you can break into the lucrative world of freelance rock journalism (and by "lucrative" we mean having your own blog), we've put together a basic article outline for you . . . .

First off, you need to recall an instance where you or someone you know first heard a song by the artist in question. In the case of Chuck Berry, who's 78 years old this year, maybe it was when your ancestors first tamed fire.

Or perhaps there was a period in your life that mirrored one of the scenes described in one of classic rock's memorable songs. You know, one of those everyday vignettes we can all identify with like running into an old girlfriend in a topless bar, being seduced by a sexy older woman or marrying Christie Brinkley.*

Next, you'll want to discuss how the band's lyrics are still relevant to what's going on today. This shouldn't be hard since rock songs are usually about sex, drugs and rock and roll and all of those things are still around. You want a tough assignment?  Try being a classical music critic trying and explaining why Mozart's theme for harpsichord and lute is still a just as socially powerful today as it was in the 1700s.

Price comparisons are always a reader favorite.  You may want to mention how gas prices have gone up about two and a half dollars over the past 40 years but most concert tickets have increased by something like 1500 percent.  Then explain to your readers why there is no national outcry to regulate ticket prices and pass special legislation to tax "excess" Ticketmaster profits.

And, finally, end by quoting a pithy lyric that not only shows you can remember a song-line from your youth but also puts to rest the notion that heavy drug and alcohol use cause any lasting damage.

After all, you're still rolling down the highway and we know you won't get fooled again.


* Tangled Up in Blue, Maggie May and Uptown Girl for those of you playing along at home.