Climate change? Bird flu? These problems are nothing compared with the latest global pandemic . . .
By Mark Jabo
2007-03-02

There's been a lot of talk about the obesity epidemic in the . As if somehow not being able to pass on your fourth Big Mac now qualifies as a major health problem.

The next step in the discussion usually centers on "the costs" of this mass epidemic . . . or should that be epidemic of mass?

But there is a much more virulent contagion threatening the globe. The evidence is everywhere and the epidemic knows no limits. It attacks old people, young people, Democrats, Republicans and people on YouTube.

Yes, people, we are in the midst of an exploding global stupidity crisis.

I'll admit it does appear there are a few more fat kids than when I was in grade school, but if you go to a playground, you have to look around to spot a few husky children.

Stupid people are everywhere. They continually pop up like the flesh-eating zombies in Resident Evil. 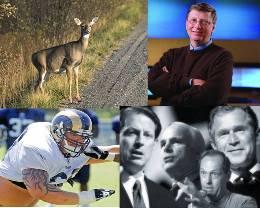 Which one of these is not like the others? ]

A cursory look at the morning paper is all you need to see that the whole stupidity plague is reaching pandemic proportions. This affliction is amazing if for no other reason than the wide variety of people it affects . . . .

Exhibit 1: Pro football player, Richie Incognito
The Ram center took impulse buying to a new level when he outfitted his BMW 750 with a few extras . . . in the form of 23 TV screens.

Let's skip over the obvious problems with having a TV in your car. What could you possibly be thinking by ordering 23 of them!? Richie's new tricked-out car included televisions on the visors, headrests and gas cap.

You can just imagine Richie thinking, "Incognito, my foot. People are going to notice me."

Exhibit 2: Sad in
I have to admit I'm continually amazed that syndicated columnists can make a living handing out stupid advice. That's what your friends are for. So, normally, I don't set the expectation bar too high when reading letters to Dear Abby. But Sad in Salisbury should win some kind of award for the following letter:

DEAR ABBY: My boyfriend and I have been together for six years, and the only problem I have with him is that he lies about meeting other women on sex sites. The problem with this is that he is looking for someone in our hometown for discreet sex. I have confronted him and told him how it makes me feel, but he still does it and finds other sites to go on. What should I to do? -- SAD IN

I'll tell you what to do . . . get your boyfriend to write a book and become his agent. This dude is a lock for some kind of male Lifetime Achievement award. If the guy would just agree to find discreet sex outside of his hometown, he might be able to keep this up for another 25 years.

By the way, Sad, the lawn and garden center called . . . your new doormat is ready.


Exhibit 3: Deer
Seriously. What is the problem with you animals?  Experienced hunters dressed in camouflage, soaked in commercially packaged deer urine and armed with high-powered rifles have a difficult time killing you . . . but then you get hit by a soccer mom in a Ford Taurus.

If Charles Darwin were alive today, he'd revise his theory. Here's a tip for all you deer out there: if you're prancing through a field and come across a strip of blacktop, turn around and go the other way. Don't try crossing it . . . because you suck at it. If you must cross, look both ways and cross with the light or at least find a PETA member to escort you.

These are just a few examples.  I haven't even mentioned the members of our society who are most vulnerable to this insidious stupidity disease . . . l

et's just call it a tie between politicians and celebrities.

So, as you go busily about your daily life, please take a moment to think of those less fortunate than you who are afflicted with this disorder.

And, by all means, when you run into them . . . take the opportunity to slap some sense into them.