Superman in the movies

Since his first appearance in the comic books in 1938, our planet's most amazing fictional illegal alien has managed to keep our rapt attention. Variously known as "The Man of Steel", "The Man of Tomorrow" , "SUPERMAN" and "Clark Kent", the fellow with the blue hair with the kiss-curl who gets about faster than a speeding bullet in red panties and blue leotards is probably more popular nowadays than he was when first conceived. His real name is Kal-El, and he is the only son of Jor-El, a noted scientist back on his home planet of Krypton.

In a smart move, Jor-El foresaw the cataclysmic end of his homeland coming, swaddled his baby boy up in a bullet-proof comforter and launched him in a rocketship into outer space, out of harm's way. In a particularly stupid move, however, Jor-El aimed the ship at Earth, evidently not having done his research into relocation. Despite appearing human, young Kal-El possessed powers and abilities far beyond those of mortal men. He found out quickly (as mentioned) that he was faster than a speeding bullet and more powerful than a locomotive. Early on he discovered he could leap tall buildings in a single bound and bend steel in his bare hands.

Being an illegal alien, he found it necessary to create a false identity, that of a mild-mannered reporter and using the alias of Clark Kent, he managed to secure himself gainful employment with a great metropolitan newspaper. These days most illegal aliens create false identities in order to ensure they get regular welfare cheques, but we won't get into that.

It is interesting to note with Kal-El, that, in comparison to his uncanny superhuman powers, he is somewhat lacking in imagination. His one and only method of concealing his true self to others is to don a pair of horn-rimmed spectacles. Presumably the investigative reporting staff of The Daily Planet is similarly unencumbered by imagination, as Clark's keen disguise has had them hoodwinked for over sixty years now. Not what I would call Sixty Minutes staff material. More like the National Enquirer.

So Kal-El/Clark/Superman did what he did best, living out his life fighting a never-ending battle for truth, justice and the American way (whatever that means). Nobody else but Kal-El's adoptive mother and the dim-witted ace reporter that he secretly lusts after, Lois Lane , have a clue that Clark Kent and Superman, strange visitor from another planet are one and the same person. His mom knows, and Miss Lane only suspects.

True to time honoured tradition, the modern myth of Superman was eventually translated to the lively art of cinema, first in a series of very well drawn animated cartoon movies produced by the Fleischer studios, the guys who had previously breathed life into Betty Boop and Popeye the Sailor Man. The big fella next showed up on screens in the form of a cliff-hanger serial, wherein Kal-El was portrayed rather uncomfortably by a former dancer in Busby Berkeley musicals by the name of Kirk Alyn, who looked about as at home in the blue leotard and red suede boots as a man wearing spats at an Iowa picnic. His portrayal of Clark Kent was admirable, though, a take-charge, go-getter in a snap brim fedora who opted for wire rims instead of bulky tortoise-shell frames on his cheaters. 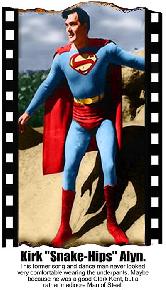 The special effects in this low-budget offering had me scratching my head and wondering to myself, "Hang on, am I really not supposed to notice that everytime Superman is about to fly, the actor playing him runs behind something and comes out the other side as a cartoon?" Up, up and away. When he landed they pulled the same trick in reverse. It must have been state of the art FX for the 1940s.

The coming of the fabulous fifties brought with it a different Superman, this time on the relatively newly affordable device known as the television set. Clark Kent on the small screen was just as much a take-charge go-getter as he had been in Alyn's portrayal, but, as played by George Reeves (whose only prior notable role was that of one of Scarlett O'Hara's suitors in Gone With The Wind), he had a sly cheekiness about him, often cocking his head, pushing the horn rims up on his nose and winking to the camera after offering an implausible excuse to Lois about where he had been while all the excitement had been going on.

Just one time I would have loved to have heard him say, "Well, Lois If you would take your head out of your ass long enough to get ample oxygen to your brain, you would realize that I AM Superman." If George Reeves as Clark Kent seemed endearing, his portrayal as Superman was downright charming. Still looking uncomfortable in the leotard (according to reports, George claimed it was very itchy and made him sweat profusely), the middle-aged actor did a great deal of bouncing off a miniature trampoline into and out of open windows, kicking in balsa wood doors and crashing through Styrofoam brick walls.

The flight technique was now achieved by filming the out-stretched actor lying on a table against a blue screen and then superimposing his image, cape ruffling, on top of a background of either passing clouds and/or buildings. Every single time he took to the air, the Superman Theme Music would pipe in. Doing the majority of his own stunts took its' toll on George Reeves, who suffered from chronic back pain as a result until his death by suicide at the end of the decade. Contrary to rumour, George Reeves did not leap from a high rise building's ledge to end his life, he in fact killed himself in the bedroom of his Beverly Hills home by pressing the barrel of a loaded WWII German Luger to his temple and squeezing the trigger , unable to climb out of the bleakness of a clinical depression brought on by his inability to work. 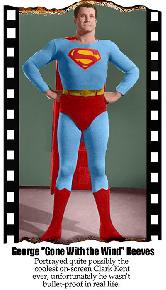 Except for a poorly animated series of cartoons and a musical that ran briefly on Broadway in the mid-sixties, Kal-El remained confined to the pages of the comic books.

Then in 1976 he was back in a major big-budget motion picture adaptation of the saga penned by none other than Mario Godfather' Puzo. The title was Superman, The Movie' (as opposed to what? Superman, The Infomercial'?). The film was hyped with the tagline, "You WILL believe a man can fly", and, even though you didn't, it still boasted a stellar cast including Gene Hackman as a wonderfully sarcastic Lex Luthor, and a notoriously overpaid Marlon Brando as Jor-El. Donning the cape this time was an obscure stage actor named Christopher Reeve, who filled out the tights like nobody had in the past and whose chiseled facial features seemed to have emerged directly from the comic books.

Even his hair seemed perfect, and that's how Reeve played him: perfectly; a flying Gandhi, with more pity than malice for villainy, a genuine affection for mankind and more compassionately human than any human being would ever be capable of. The role was finally given a seriousness by Reeve, despite the comedic bent of the dialogue, and at times, thanks to his acting ability, one almost feels sorry for this lost soul who is the last of his kind, a stranger in a strange land struggling to adapt in a world of inferiors. It would have been easy for a lesser actor to fade into obscurity after such a high profile film debut, to be typecast as "that guy who played Superman", but Reeve survived three more outings in the cape (one of which he directed), and made dozens of highly regarded films until an equestrian accident left him a quadriplegic.

Despite this, he worked even harder, not so much as an actor (although he STILL appeared onscreen in a remake of Hitchcock's classic film Rear Window') but mainly as an activist, championing the rights of the handicapped and rallying for funds for medical research into spinal cord injuries right up until he died last year of a heart attack resulting from complications due to respiratory failure. 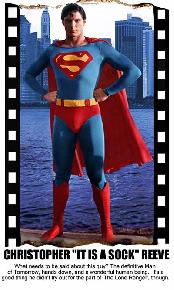 Which brings us now to the present, with Superman fans worldwide eagerly awaiting a new film adaptation, directed by Bryan Singer and starring a rather odd-looking yet buff young actor named Brandon Routh in a revamped costume and a new pair of horn-rimmed spectacles. What can be done with the story of Kal-El that hasn't been done already? Will the new guy be any good? How can he possibly top Christopher Reeve, who, for my money, IS and always WILL BE the ONLY Superman? Tune in next week for another exciting story in "The Adventures of Superman"! 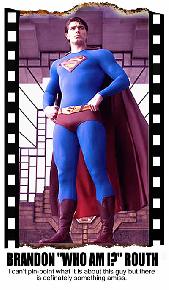