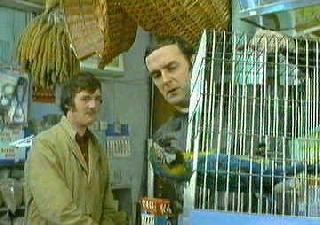 In the pecking party to go green, everybody's getting in on the fun.  Even funeral directors.

Next weekend's featured speaker at the annual meeting of the Funeral Consumers Alliance of Maine is Mark Harris, author of "Grave Matters: A Journey Through the Modern Funeral Industry to a of Burial."

Maybe it's just me, but I'm thinking it's just a little bit creepy to be holding a funeral director's conference the week of Halloween.

Mr. Harris will be talking about the new trend toward "green" funerals.  In a green funeral there is no embalming or fancy casket.  The deceased is buried in the ground and decomposes naturally.

Green funerals are becoming more popular with eco-conscious baby boomers as they embrace this natural method of burial which has long been practiced by Italian American "businessmen" in Brooklyn and .

According to the Portland Press Herald, do-it-yourself, green funerals are part of a growing national trend.

Great.  You can raise your awareness of climate change while, at the same time, creeping out your neighbors.

You can bet little Christopher from next door will think twice about chasing his baseball into your backyard when he sneaks in to see a half-dug hole and grandma propped up against the fence.

What better way to teach kids that flies are part of the ecosystem, too?

Many of you may find some comfort in knowing that your crazy Uncle Ralph, who used to walk around the house naked, will be fertilizing your organic garden for years to come.

On the other hand, you may never look at a carrot the same way again.

Some environmentalists are promoting cremation as a more ecologically correct method of dealing with the dead.

I don't know.  The average homeowner can't light a barbecue grill with a quart of lighter fluid and a pile of specially-treated charcoal.  What kind of gruesome results to you think you're going to get when you try to have a Viking burial in the above-ground pool for Aunt Sally?

Still, cremation can solve some problems.  It's always a tough decision whether to give up football tickets on the 50-yard line or attend the funeral of the weird uncle you really didn't trust to be alone with your kids.

Now, you don't have to make that choice.  You can have your normal kick-ass tailgate party before the game and substitute a 275-pound uncle instead of lugging around that messy bag of Kingsford charcoal briquettes.

For estate planning purposes, you'll want to specify who gets first dibs on the uncle that smells like mesquite.

Best of all, green funerals are cheaper.  A traditional funeral can cost $10,000 or more.  You can usually bring in a green funeral for under $2000 -- even less if you've saved the boxes from your last move.

Author Mark Harris notes, "It's a lot more than just about the environment. It's a return to tradition. It speaks to the idea of dust to dust. This is the way we used to bury people, in the first hundred years of our country's history."

Of course, the first hundred years of our country's history were also marked by child labor, rampant disease and civil war, so we might want to be a bit careful about trumpeting the whole "tradition" thing as a reason for going back to the "good old days."

Strangely enough, more people may have access to a green funeral due to global warming.  Funeral directors note that "the ground can freeze in winter and make it harder to dig graves."  Chalk up one benefit to climate change: more home burials

Many funeral homes store bodies during the winter and wait until the ground thaws in the spring to bury them. This creates a problem for the do-it-yourself mortician.

Even with the shelves taken out, most modern, energy-efficient refrigerators are a tight fit for storing relatives.

If you have friends in from out of town, there's also the occasional problem of them getting up in the middle of the night to raid the fridge for some ice cream.  You'll want to be careful not to sneak up behind them without first turning on the lights in the kitchen.

Otherwise, you may need to buy another refrigerator.

That will just increase your carbon footprint and undo most of the planetary benefit of composting your family members.