War's come and go these days with CNN footage. Combat Artist Steve Mumford travels to Iraq to paint the war and tell a story with his paintings. Caleb Schaber talks with Steve in this exclusive.
By Caleb Schaber
2007-04-14

The war in Iraq conjures many images, but few people would think that fine is art is one of them. The tradition of combat art comes from the time before the camera and has been lost down a deeper well than that of black and white negatives. 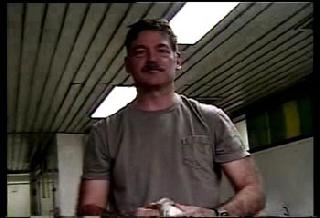 I meet Steve when I was passing through Baghdad. Most of the people I meet in the press office are writers, photographers and videographers. Steve was the first Combat Artist I have met, and one of the handful operating in Iraq.

I've been a combat artist since the war started here [in Iraq], Steve told me while we were sitting around the Green Zone, a few days before a mortar struck and killed a soldier and a contractor.

He said that he had not been in Iraq for over a year, although this was his fifth trip to the war. The last time he was in country he kept staying longer and longer. It's something I know well myself. The longer you stay here, the more want to see. It's almost like a drug.

The tradition of war art can been traced back through many collections in museums but it is doubtful that these idealized paintings of historic figures were made by artists that were actually in the war they portrayed.

One of the first recognized war artists is Winslow Homer, who covered the American Civil War for Harper's Weekly. 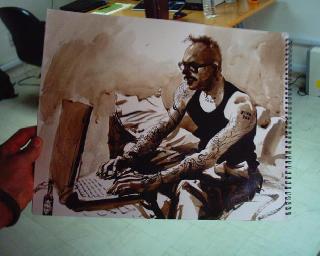 Caleb Schaber - An ink war painting by
The United States Marine Corps has the MOS of 9950 a combat artist. They have deployed a few to Iraq. These soldiers come to the war to draw and paint Marines in Combat. I am still looking for one here in Iraq and if I find one, I will tell you all about it.

In Vietnam, the Army had combat artists as well. I did some informal research on what the Army is doing for combat art. One Major, who works as a PAO in Baghdad told me that he knew a few Army Illustrators. They go to the same school in Maryland as the broadcast and print journalists. However, the Major added that all of them he ran into had jobs making power point presentations for officers. Later, as I traveled near the ancient city of Ur, an Army PAO told me that he had friends that were Army illustrators. If they are good, he said, they get a job in Psy-Ops. 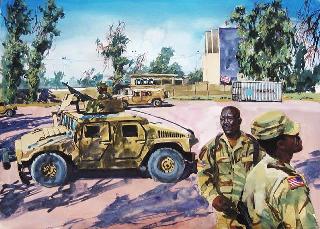 The Army uses photos taken by soldiers such as himself and has Army Illustrators paint pictures from those photos, rather than doing sketches in the field, like, or the Marine Corps. I am not sure what the Navy and Air Force has, but surely they have Illustrators.

So, Steve, I ask, have you even been shot at why you are painting?
A bullet never landed anywhere near me, he said, but he has been in circumstances where the soldiers he was with were shot at. He took cover with other soldiers and made some sketches. With the dangers of snipers, Steve told me he would not be out in the open with an easel or a sketch pad when soldiers were under fire.

You can see a video interview I did with Steve. He was heading out on his first day of working in a hospital in Baghdad.

Steve started out at the Boston Museum School. He said when he was there everyone was doing abstract expressionism and he spent about eight years doing bad abstract paintings. I figured out what I really want to do is tell stories.

You can find a series of stories that Steve has experienced and represented in his art on the websites at the end of this article. He has worked with soldiers and Iraqis. I tried to get him to go to Afghanistan. I spent eight months there last year and I would love to see what he comes up with over there.

Everything has to be negotiated with my wife, he said and added that if he wants to stay married to his wife,  he can't just parachute into wars. And he has to come home when he says he will come home. Also, for art, Steve needs to be out of the war.

I  have to get back to the studio, he said. The most important work takes place in the studio.

Steve takes all his sketches and puts them together in a series of paintings. Sometimes he spends over a year in the studio. 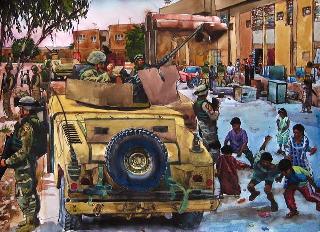 Kids Scrambling for Candy Bag. An ink war painting by 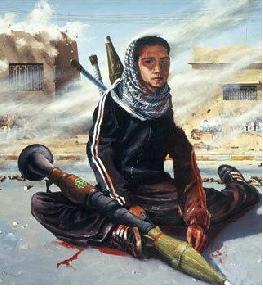 Child with RPG - An ink war painting by