Are you successful?   Are you tired of life being just too damn easy?  Do you have a career, power or money you'd like to get rid of . . . but just can't seem to find the time?

For years, famous people and thousands of people just like you have struggled to fritter away unwanted achievement.  The good news is, thanks to an amazing breakthrough, you no longer have to devote 10, 20 or even 30 hours a week trying to devise ways to minimize your abilities.

Creationists at in have discovered an amazing new way that you can be below average and stay there . . . without pills or other fad diet gimmicks that "claim" to work at ruining your career, relationships and lifestyle.

The secret is in the amazing component of "common sense."   Don't let the name fool you - just because it's "common" sense doesn't mean it's not powerful.  By drastically lowering or, in extreme cases, totally eliminating common sense from your daily life you, too, can counteract any lucky breaks or triumphs you may have worked for.  Yes, lowering your common sense will even help if you're genetically predisposed to accomplishments due to inherited wealth or hard-working parents.

Too good to be true?  Judge for yourself from the following testimonials . . .

George W. Bush was a modern political success story.  A former governor of and the son of a former President, he had just enough experience and contacts to put together a campaign for the nation's highest office.  With the help of a pedantic and inept former Vice-President, who couldn't even carry his home state, George W. became only the second son of a former Chief Executive to capture the White House.  When Muslim extremists attacked multiple targets on soil, President Bush responded with a no-nonsense stance against terrorism.  He couldn't put a dent in his popularity and the exalted perception of his leadership skills.  Until, that is, he discovered the LCS (Low Common Sense) Diet. 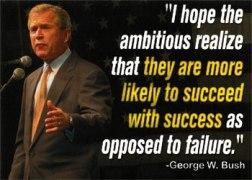 "Eight years ago, I was presidential. Today, I'm on a magnet."]

Like a lot of you, I struggle from time to time with making good decisions.  Sometimes it seems like no matter what you do, things just turn out right.  People you appoint to senior positions suddenly show an actual aptitude for what they're doing and even the press doesn't criticize you too severely.  I knew, if I didn't do something quick, I'd secure my place in history as one of the most effective Presidents this country ever had.

Oh sure, I'd tried to make bad decisions in the past but I always seemed to wind up taking the advice of people who were smarter than me - advice like "label yourself a 'compassionate conservative'" or "don't try to ad lib too much."  It wasn't until I really got serious about trying a Low Common Sense Diet that things turned around.  I invaded and, without any idea what I would do once the country was occupied, I stuck with an unsuccessful strategy and refused to change it for over three years.  Today, my popularity and confidence ratings are at an all time low and I've probably cost my party the White House for at least the next two elections . . . and I owe it all to a steady diet that's low in common sense.

"I'm young, white, blonde, and made over $50 million dollars before I was 21 years old, so a lot of people think losing a career and half my net worth might come naturally for me.  But it's not that simple; I still have to work at it.  Thanks, LCS Diet!"

Britney Spears had done it all . . . a double platinum album, appearances on MTV and a Grammy Award - all before her 18th birthday!  She did Pepsi commercials, appeared on magazine covers like Rolling Stone and Esquire.  She even performed in front of millions of people on her sold-out world tour.  But the only thing Britney couldn't lose was her career and her sex appeal.  Then she turned to the LCS (Low Common Sense) Diet.  In addition to losing the good will of millions of fans, she also lost millions of dollars in endorsements and legal fees. 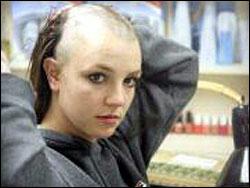 "There goes my hair...and my last remaining fan."]

Okay, like, I admit it - when I had fame, fortune and limited critical acclaim  all before my 21st birthday  things changed for me.  People wanted me to endorse their products and I was the fantasy of 83% of the male population in the .  The other 17% was probably gay.  But I was already starting to feel the strain of being so lucky.  My clothes always seemed too tight and none of my houses fit my rapidly expanding ego.

The bottom line was, I didn't like the way things were going; so I decided to make a change.  That's when I committed to a plan of lousy eating, no exercise and a daily diet almost totally devoid of common sense.

I married a gold-digging dancer (like, how ironical is that?!) and proceeded to watch as he and his wannabe posse spent my money like a bunch of third-world dictators.  I even bankrolled a bunch of my husband's hare-brained ventures like I was the United Nations, or something.  Naturally, as things got crazy I started drinking, partying and stripping off my underwear in public in an effort to further alienate any fans or music executives who might have been inclined to stay in my corner.  Now, I might even lose custody of my two children and a good part of my fortune to a guy who's biggest claim to fame is being a joke even among white rappers.  I recommend the LCS Diet to anyone who's serious about losing everything they've worked for.

"Like a lot of people I watched my market share fluctuate over the years.  Now, with the new LCS Diet, I've lost market share for 11 years in a row.  And I'm keeping it off!"

William Clay Ford, Jr. is the great-great grandson of both Henry Ford and Harvey Firestone, two icons in the history of the American auto industry.  He's is a black-belt in tae kwan do, studies Zen Buddhism and plays the guitar.  When he joined the Board of Directors at Ford in 1998 the company had already started to lose market share.  In 2001, using the LCS Diet, Bill Ford, Jr. ousted then-CEO Jacque and named himself to the top position. Mr. Nasser had a reputation for maximizing corporate profits and shareholder value, while Ford was noted for valuing people, traditions and environmental concerns. [ 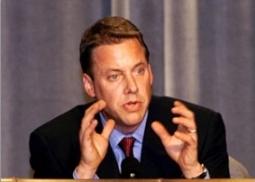 "You heard me...we're trying to shrink the company into a little ball."

Hey, when you're making money, everything is easy.  But a lot of times, you get to feeling tired and listless  like nothing you do matters.  It just becomes boring listening to people talk about profits and strategic planning.  That's where the LCS Diet comes in.    There's nothing like losing market share 11 years in a row and posting multi-billion dollar losses to help raise your energy level.  These days I can't wait to get out of bed and see what "bold moves" we can make to keep this company on the downslide.  My goal is to be even smaller than Hyundai some day  and with the LCS Diet, I know I can do it!

"As a billionaire, I could pretty much take care of my family for the next 100 years and improve the lives of millions of people worldwide.  But what I really wanted, more than anything, was to lay claim to being the world's biggest jerk.  With the LCS Diet, I'm closer than ever to that goal!"

Who hasn't heard of Donald Trump?  Maybe you've seen him squiring around one of his succession of trophy wives or maybe you've just destroyed two or three of your own television sets when you mistakenly turned on The Apprentice.  Loathe him or despise him, it's hard to miss The Donald.  He seems to be everywhere. 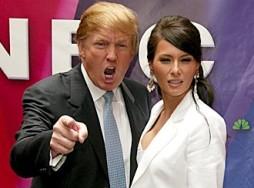 "No, this particular piece of property is NOT for sale."]

You're fired.  I know you don't work for me but that won't protect you from being the target of my hackneyed catch-phrase.  You see, it's the easiest thing in the world when you have tens of billions of dollars, to just be pleasant and cordial.  Anyone can do that.  Hell, even guys that work 12 or 14 hours a day will say "excuse me" if they bump into you or maybe even hold the door for an old lady . . . that's why they're not world-class jerks like me.

People from all walks have been able to work wonders with the revolutionary Low Common Sense Diet.  If it works for them, it'll work for you.

What are you waiting for?  Pick up the phone and call now.  What have you got to lose?