As a television viewer, I'm generally a
network's worst nightmare. I'm not loyal. I refused to watch shows that
require long time and plot investments. I just want to turn on the TV
and be entertained. The best show for pure entertainment: A&E;s 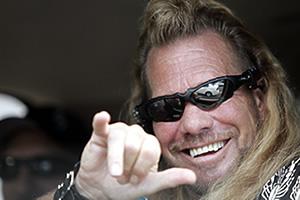 courtesy A&E
Dog
himself is the most dynamic of the show's characters. A self-proclaimed
former Hell's Angel, once convicted of murder in Texas, Dog found
religion and a calling in life. He hunts men. Okay, and women. He wears
cowboy boots, a bulletproof vest, no shirt and strings of feathers in
his hair. Dog's voice is gravel scratched by years of chains smoking
(one episode of the show focused on his battle to quit smoking, thought
it's unclear whether he has been successful). Dog doesn't just hunt
criminals, he hopes to change their lives. Not that the hunt isn't
intense. When the Dog sets his sites on someone, they will be found,
usually amid a barrage of yelling, profanity and sometimes mace. It's
after the thrill of the hunt that Dog starts dispensing his wisdom,
along with plenty of cigarettes to the criminals he brings to jail.
Some of his best advice: "Stay away from whores" and "I can't beat on
my woman, you can't beat on yours." Dog yells. Dog laughs. Dog cries.
And he does it all unabashedly. 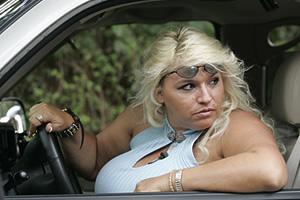 Courtesy A&E
is
the kind of woman I dread tangling with but would love to be friends
with. Beth is the bail bondswoman. She writes the bonds, Dog and crew
grab the deadbeats. Don't be fooled though. Beth gets right in the
thick of the fights. Short fused, Beth loses patience with families
faster than anyone else and always sees through the stories cute young
girls give to cover for their bond-jumping boyfriends. We see Beth's
tender side occasionally. Stories about her past surface and they are
always tragic. It's clear that she's had a tough life and is happy to
have her Dog, her company and she loves Hawaii and its culture. Her
physical transformation from the show's first season to now is amazing.
Her big blonde hair has given way to a sleeker, long, straight blonde
hair. She's curvy. Wait. She's BUSTY. NO, she is super well endowed .
The first season of the show, Beth wore mostly tank tops (with matching
headbands) that made the eye go right to the ample dé colletage. She's dressing a little more modestly now, but she's sexy as ever.

Courtesy A&E
Tim,
Dog's "brother" is hardcore. If you're the criminal the team is chasing
-- you do not want Tim to find you first. Tim will mess you up. Not
only is he not afraid to get physical, he seems to prefer it. He looks
right into the camera and announces that he'd hunt down his own mother
if she jumped bond. He means it. He's not Dog's blood brother, but
they've known each other for decades and have decided that they're
brothers to the end. Tim tolerates Beth but it's clear that their
relationship is a tense one. They've had shouting matches on the show.
Tim doesn't care for drama. His world is black and white where Beth's
is full of vibrant colors. But looking into his steely eyes, you know
that Tim has a soft side. We've met Tim's wife and three of his
children on the show. His wife is a Samoan goddess. Stunningly
beautiful. It is obvious that Tim loves his children and that they are
the joy of his life.


Two of Dog's sons are also on the team. 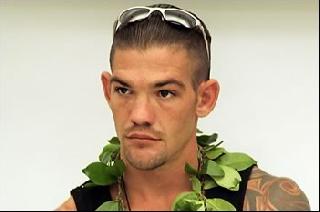 Courtesy A&E
Leland
owns a bail bonds company on the big island. He's young, tall and lean.
He frequently changes out of his shirt giving his fans little glimpses
of his six-pack abs. I think he does those cheesecake shots on purpose.
Leland is quiet and is still learning the business, but it's clear he
knows what he's doing.

Courtesy A&E
Duane
Lee is a recent addition to the show. He's an all-American boy with a
great smile and a good sense of humor. We don't know his history or
even his experience in bail bonding or bounty hunting, but we like him.


The Chapmans are a colorful family and they're real. When you watch Dog the Bounty Hunter you
know that these folks are not acting. There may be times they play it
up for the camera but, to me, this is the one reality show that
captures how their subjects truly are. They swear. Their grammar is
horrifying at times. They make literary allusions that don't make
sense. They fight. They throw tantrums (okay, mostly Beth and Dog throw
tantrums). It's real. It's raw. And as a viewer you just can't turn
away. With each fight, with each censored swear word, you're drawn into
a world of good and bad, of evil and of redemption. You find yourself
hating the lying criminal who has jumped a $75,000 bail but then Dog
brings back the criminal's humanity by asking him about his children or
what led them down the road of drug addiction.

It's also just plain fun to watch Dog work. He uses
all sorts of lies and stories to get criminals to come into the office
or a McDonalds so the team can pounce. He calls pretending to be an old
prison cellmate or says that they've won a free Kirby vacuum. The
criminals (or their families) always fall for it. Dog gets the job
done. I've seen one episode where Dog did not get the guy. The episode
ended with him putting the criminal's mother and brother in jail. A
note at the very end of that show said that police caught the criminal
two weeks later in a high speed chase.

I'm not ashamed of my love for this show. Not only do I watch it, I DVR it so I can watch it again later.

Dog the Bounty Hunter airs on A&E network and on A&E on demand. Check your listings and watch!