Andy Martello
2005-01-07
comments
Every man needs a hobby. My wife says all men need to putter. I've
never given much credence to the hobby as a necessity but I am not
without my time-wasters.

As a kid I collected many things.
It's less of a hobby and more like not throwing things away. I
collected stamps, rocks, shells, baseball cards, coins, and photos of
naked women (STILL a hobby today).

The mother of a girl
I dated had two distinct collections: pocket watches (normal) and eye
cups (bizarre). Eye cups are small glass cups used to "wash out" an
eyeball when dirt gets under the lid. I never saw the attraction of
having so many nearly identical eye cups but I suppose it could have
been worse - she could have collected bedpans and chamber pots.

I took time to examine my own hobby habits. Sadly, this is what I found:

I
still have the stamps, though I no longer add to the collection. I have
amassed a large assortment of penguin items over the years. I enjoy the
occasional cigar from time to time. Oh yeah, there's one more thing...

I HAVE OVER 250 DIFFERENT VERSIONS OF THE SONG, LOUIE LOUIE! 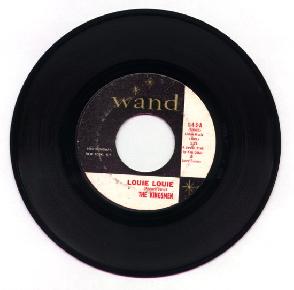 You
heard me - I collect versions Louie Louie. You may not even be aware of
the fact there are so many versions. You likely think The Kingsmen recording is the only one of note. You poor BASTARDS! The Kingsmen didn't even write that damned song!

Louie
Louie, for all its simplicity and seemingly incoherent lyrics, is
unofficially the second most-recorded song in history; it is second
only to The Beatles classic, Yesterday. I may be biased but it is a
much more entertaining song than Yesterday. Who would want a collection
of THAT sappy song?

Personal preference aside, how can
such a thing happen to an otherwise normal man like myself? O.K.,
"normal" is not quite the right term to describe a guy who has showered with a horse, but you get the idea. How did I come to have such a worthless hobby?

I believe I have some sort of other-worldly connection to the song. Let's start at the beginning.

I saw an episode of TV's Censored Bloopers and Practical Jokes where Dick Clark & Ed McMahon inducted a man into their Practical Joke Hall of Fame. This guy was known for staging HUGE jokes, pulling ones over on entire cities at a time.

As
it happened, among his pranks was an attempt to change the state song
of Washington to Louie Louie. He had buttons and fliers printed and
many of people got behind his ridiculous campaign. It actually came to
a vote in Washington due to such overwhelming response.

I
thought this was among the most brilliant and hysterical things Id
ever heard. That was the original sin. Louie Louie was now an amusement
to me.

During
the wine cooler craze of the 80's, the makers of California Cooler wine
coolers started using the song in their TV ads. One promotion promised
to send you a cassette of The Best of Louie Louie if you sent in a proof of purchase and a few bucks. The cassette, from Rhino Records, featured 10 different versions of the song.

10
different versions? I had to own this! The problem? I was well under
the age of 21 and couldn't find anyone willing to drink enough of those
awful coolers just to satisfy my curiosity. I'd never seen the cassette
in stores nor was I aware of the Rhino catalog so I decided to set out
on my own and see how many versions I could find.

I already had the Animal House soundtrack and several trips to record stores provided me with renditions by Paul Revere and the Raiders and the Fat Boys . I had three versions and not one was by the Kingsmen.

Here's
where it gets a little mystical. Around the Fall of 1986 I was on the
most horrendous road-trip of my life. I was taking a friend back to her
college and ended up getting lost on the way home. I was very late and
my folks were worried.

As a side note, let me add that there were no cell phones to speak of then and trying to find a telephone anywhere in IOWA was just about as hard as finding a guy who knew where ILLINOIS was in relation to Iowa. Finding a map took almost an hour!

To
make matters worse, I was in the middle of a break-up with my
girlfriend. Coincidentally, the gal who's mom collected eye cups. My
ex's university was on the way home. Like an IDIOT, I took a
little detour from my already awful trip to have one last argument with
her. A few hours of senseless bickering later, I headed home and pulled
into my driveway at 5:00 am.

My parents were crazed and furious,
as any parent would be. I told my dad about the drive, the argument,
and the lack of phones in Iowa. The phone part seemed convincing enough
for him. He'd BEEN to Iowa before.

After
all was settled and I was on my way to bed, my mom handed me a small
gift-wrapped package. She told me she'd found it on the doorstep
earlier that day. There was no card or writing on the package other
than my name. Inside the package was a copy of The Best of Louie Louie. I decided that it was divine intervention.

I
listened to the cassette for weeks afterwards, finding much enjoyment
in the various renditions of the song. It helped me forget about my
break-up and got me invited to a lot of parties. Who doesn't want the
wacky guy with a tape chock full of the best party song of all time?

I
eventually found out who sent me the tape, but I'd already decided that
Louie Louie had some sort of celestial connection to me. It had
recuperative powers and it would always be there for me. Regardless of
if the song was somehow magic, it DID make my collection bigger!

About
two years later I found myself in another bad break-up. This time with
a girl I had every intention of marrying. I was truly devastated.

While at a record store with my friend John (of Boobys fame) I decided to check for any new "Louies". As fate would have it, Rhino Records had announced plans to release The Best of Louie Louie, Vol. 2. The date on the press release was the same day my girlfriend dumped me! Why shouldn't I believe that Louie Louie was and is MY song?

What I have is unique; I have a CONNECTION!
I don't fight it; I embrace it as another unusual thing in my life. I
was born under the astrological sign, Gemini (The Twins). Who's to say
that the twins aren't both named Louie?

Since then, I've come to find a few others out there with the same obsession. Theo de Grood
was the first to start a website dedicated to America's most stupid
song. By the time I'd met him, I had 55 versions of the song. I thought
I was the world's leading authority on the tune.

That was, until I'd learned about Stretch Reidle & Phil Dirt and the KFJC radio marathon that featured over 550 different versions. Imagine my dismay when I found out my paltry collection wasn't even 1/10th of the known versions! 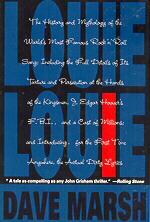 To make things worse, I learned about Eric Predoehl and his upcoming DOCUMENTARY FILM about the song's storied past. Eric created the Louie Report, LouieLouie.net
and is a noted rock music historian. His collection of songs was not
just larger than my own. He has memorabilia, stories about the song's
creator, Richard Berry, and has met just about every cool musician that has ever played the damn song!

There has even been a whole book about the song written by renowned music columnist, Dave Marsh.

I AM NOT ALONE!

These
days I don't go out of my way to find new versions. When I need a
pick-me-up or get the urge to hear the three-chord rock classic, I
listen to what I've got.

Today there are estimates of over
2,400 versions of the song in existence. If true, my collection still
barely represents 1/10th of all known recordings. Still, I don't care.
It is, after all, just a hobby.

For More Information About the Song, "Louie Louie" Check out These Louie Links!