Christmas Traditions
By Andy Martello
2004-12-26
Every family has their own set of traditions during the holidays.
Some are long-standing rites of passage filled with meaning and
sentiment. Others are just good silly fun. Around here we are not
without our fair share of Christmas traditions. 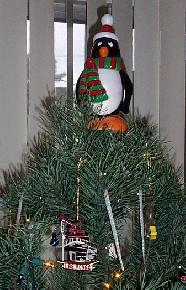 One Sincere Tree!My wife and I always get our tree from the Cosley Zoo,
a tiny but extremely adorable free admission zoo just down the street
from us. We go there because the money raised from the trees helps pay
for food and exhibits at the zoo and the trees, to paraphrase Charles M. Schulz,
seem more sincere than any others. On that tree we hang many unorthodox
ornaments, mostly penguins and frogs, and a little piece of her
childhood; plastic, glow-in-the-dark icicles. I always light the tree
but the person who chooses the tree alternates year by year, a
tradition started in my family.

These are standard practices
in our home and we are always comforted by their regularity. When fun
new traditions emerge we embrace them. Of course there are some customs
that were around long before our marriage occurred and they too must be
honored and respected, even if they make no sense to anyone else.

As
an example, my younger brother, Matt, and I always drive SOMEWHERE on
Christmas Day. We take the toll ways and always be sure to use the
manual lanes. Why? A long time back we'd decided that if you are
working in a small booth on an interstate on Christmas you need a
little pick-me-up. Our solution? After paying our toll we scream, "MERRY CHRISTMAS" very loudly to the attendant, imitating James Stewart from "It's A Wonderful Life".
It is always amusing, sometimes frightening, rarely annoying. We just
do this for fun and we'll never stop. However this can't quite compare
to the simple journey Matt & I make every year around Christmas. 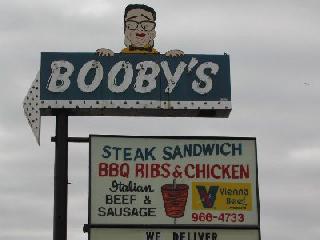 Photo By Dr. DonOn Christmas Eve I took part in what has become a long-standing holiday heritage for me and Matt. For MANY years now we head on over to Booby's Charcoal Rib
at 8161 N. Milwaukee in Niles, Illinois for the single greatest steak
sandwich money can buy. If you will indulge me, I'll describe the
sandwich.

In the Chicago area skirt steak sandwiches are a
staple among the menus and restaurants. Generally I avoid these
sandwiches because the meat is often too sinewy and tough for any sort
of consumption. Moreover, they rarely taste as good as they smell. That
smell of grilled steak hitting you upon entering the establishment is
hard to resist. Unfortunately, they are always a disappointment.

However
at Booby's the sandwiches are blessed with outstanding flavor, extreme
tenderness, and two huge slices of top-quality skirt steak. These
delectable pieces of meat are run through a meat tenderizer twice,
seasoned, and lovingly grilled over an open flame. A very light coating
of Booby's own barbecue sauce can be tasted. It is just a hint of sauce
so as not to offend those who abhor barbecue sauce. Of course the sauce
is so good most everyone ends up adding more on their own. The meat is
then served on lightly toasted, thin French bread loaves which rest on
the meat during grilling in order to soak up some of the juice.

These sandwiches are out of this world! To adapt a line from Twin Peaks, if there be steak sandwiches in Heaven, Booby's is standing next to God. They are THAT GOOD!

My
brother and I have been going there for years. Of course we go not just
for the food, but for the fact that Booby's was the site of "The Christmas Miracle".

I know it may sound strange to refer to the eating of a steak sandwich as "The Christmas Miracle"
or to even bestow so much importance on something so silly but if you
have ever had one of these glorious culinary creations you'd
understand. As for the miracle, allow me to explain.

MANY
years ago, my good friend John Severtsen introduced me to this suburban
Chicago institution. We often went to baseball games together and then
went to classic Chicago eateries. Chicago has some of the best food
anywhere and we were and still are well-versed in all the best places
to eat. I'd never heard of Booby's even though I lived very close to
the place and I had certainly never heard of their AMAZING skirt steak sandwich. I thank God John was there to lead me in the right direction.

As
I've clearly overstated, these sandwiches are just outstanding. I'd
visited the place many times with John, with other friends, and of
course, select family members. In the maybe hundreds of times I've been
there over the years I've never ordered anything else from their
extensive menu. Why screw with perfection?

By the time I'd
introduced Matt to Booby's he'd been long gone from the Chicago scene.
College may make you smarter and more appealing in the marketplace, but
it can take you away from the finer things in life. Upon every visit
Matt would want to make a pilgrimage to Booby's. I never questioned the
desire to go. I'd want to make the same trip whenever I saw my friend
John.

John and I had
just come from a Cubs game and I suggested a trip to our steak sandwich
joint. He looked at me with shocked sadness and said, "Oh no! Haven't you heard?" I'd no idea what he was talking about. Rather than tell me what happened, he simply drove me past the Booby's lot.

There
were the charred remains of the restaurant and the famous Booby's sign.
Some time back the place burned to the ground when a kitchen mishap
occurred after hours. Booby's was gone and there were no known plans
for rebuilding. I was devastated.

That same year when Matt came for his annual Christmas visit I had to tell him the horrible news. We didn't go anywhere NEAR
that block in Niles for a good long time in order to prevent getting
too depressed. For us, losing Booby's was akin to baseball losing Babe
Ruth. Booby's was such a favorite mainstay in our lives.

A year
later, around Christmas, Matt asked if we could drive by the site and
pay our respects. The shock and pain surrounding the loss of the finest
steak sandwich in the world had subsided just enough to make a visit to
the site possible. I put off the visit because I knew he'd just be
upset at the site of a vacant lot. However, we did make the trip.

As
we approached I braced him for the harsh reality. The sign was still
standing and we drew closer to the hallowed ground. Suddenly we noticed
that the sign was...ON! It was lit up and shining like a beacon
of goodness & hope in the distance. We approached the site
expecting to find rubble and ash but were astounded and overjoyed to
see a shiny NEW building instead!

Could it be? Was there REALLY
a new Booby's? Did Booby's rise from the ashes? It certainly seemed so,
but there was trepidation. After all, who could say if the same owners
were there? What if it weren't even the same thing at all? We withheld
our excitement and ventured inside.

Sure enough, the owners
rebuilt and the same staff was working there. The menu was the same as
was the quality. All that was different were the surroundings. We asked
if they still served the steak sandwich and the counter clerk smiled
and said, "Why do you think we reopened? People were bugging us for the sandwiches!"

Elated, we hugged each other and shouted out, "MY GOD! It's a Christmas Miracle!!!"
The clerk seemed amazed we'd not known about the new place. We told her
that driving by and seeing the vacant lot was too painful to watch and
figured it would never be back. She laughed, told us that "we're here and we've been waiting for you,"
and then she took our order. She even told us a few stories about other
people having similar reactions to ours. Booby's was back and the steak
sandwiches were better than ever! 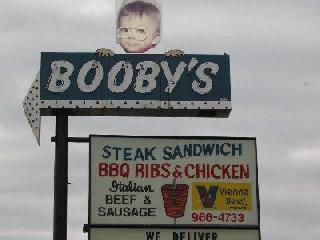 THESE
sandwiches were & are a gift from God! God Himself plucked Booby's
from the fiery pits of Hell and bestowed unto us the gift of
twice-tenderized, flame-grilled & barbecued skirt steak sandwiches
on French bread. I'm fine with the whole birth of Jesus thing. As far
as anyone around here is concerned, the rebirth of Booby's was and
always will be The Christmas Miracle!

This Story
Originally Started as an Entry in Andy's Blog. To Read More Stories
Like This One or to Comment on this Article, Visit "Tales from Andy Land!"