SPARTANBURG, S.C. - Reporters watched today as Republican Presidential candidate John McCain decided it was time to get some media coverage, so he announced to conservative voters that he wants to outlaw legalized abortion and spend more money on weapons that would win wars more quickly. 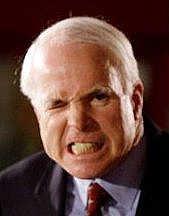 Candidate McCain is getting tough[


"I do not support Roe versus Wade," said McCain, who critics say could not even tell a Roe from a Wade even if they wore name tags. "It should be overturned," the Arizona senator told concervatives in South Carolina, although it was obvious that some conservatives from bordering states had snuck in to get a glimpse of the rapidly aging Senator.

McCain said that if elected, he would appoint judges who were better than judges who could be appointed by his opponents in either party. McCain also said that once he outlawed abortions and the needless killing of unborn people, he would support the creation of smaller and more powerful bombs that can "blow the bejesus out of terrorists and anyone within four miles of them."

McCain's rally promoting an abstinence program included a speech by a supporter who said that if Roe and Wade had waited until they were married, then one of them would never have gotten pregnant and needed an abortion. Other speeches backed McCain's ideas for making more weapons, especially the types that burn the entire flesh off of a body.

McCain talked about being a prisoner of war during the Vietnam war. He was so explicit describing some of the torture he suffered that tens of conservatives in the audience rushed for the rest room where mass vomiting disrupted the use of the facility. McCain said his captors "wanted to make us do things that we otherwise wouldn't do," including playing Chinese Checkers and trying to imitate Jack Nicholson.

He and fellow prisoners were whipped and kicked for hanging up photos of Bob Barker, but they continued to do it. "Sometimes it is very difficult to do the right thing," McCain said, pointing out that men like Barker, who have hosted game shows for decades, were an inspiration to all prisoners of war.

Conservatives wonder about McCain's opposition to a constitutional amendment to ban gay marriage. He opposes same-sex marriage, yet he feels it should be regulated by the states. A conservative leader at the rally said, "That is not a good position. In fact, no same-sex position is a position that we can condone, support or commit to mental images. Mr. McCain will have to say point blank that he don't want gays marrying and perhaps go a step further and say he doesn't want them splitting the bills for furniture, either."