Adam Lithgow
2013-07-04
comments
About the author: Adam Lithgow blogs for UK business car leasing experts Contract Hire a Car. He is a keen history buff and is fascinated by the power of symbolism.

Everyone needs to get from A to B  even bloodthirsty dictators. The despot's lust for, and execution of, power was often manifested in grand visual statements: personality cults, personal armies, ridiculous clothing, cigars, medals, bling. One theme running through the journey of many dictators is the love of gregarious vehicles - often used to shore up their powerful and fearsome images.

So what's the dictator's motor of choice? Here are some truly autocratic heads of state and their favourite runaround

As 'good' a place to start as any. The military and political leader of Germany, who launched World War Two, largely used Mercedes-Benz vehicles.

It is thought that Mercedes became the Austrian's preferred mode of transport when, in March 1930, he was driving one when he was involved in a collision with a truck, from which the car was hardly damaged.

Of all the Mercedes models, Hitler  and, indeed, many senior Nazi members enjoyed the Mercedes-Benz 770, also known as the Großer Mercedes. Hitler owned at least seven Mercedes motors and often used them for official parades.

In 2009, it was reported that an anonymous Russian billionaire paid several million euros for a Mercedes used by Adolf Hitler.

For Vladimir Ilyich Lenin on the other hand, it was all about the Rolls-Royce. The first head of state of the Soviet Union and the mastermind of the 1917 October Revolution, Lenin is reputed to have owned nine Rolls Royce vehicles during his leadership.

While the disconnect between Lenin's anti-bourgeois ideology and his apparent love of affluent, rich-man cars continues to get in a fix, Lenin's favourite Rolls was a Silver Ghost model, of which very few remain today.

In keeping with the dictators' barmy mindset, Lenin decided to 'soup-up' his Ghost and had a number of features and modifications added to his car. It was converted to run on alcohol  chiefly because it was easier to get hold of than petrol in the Civil War  and was also fitted with with skis and caterpillar tracks to negotiate Russia's notoriously hostile winters.

After being transformed into what amounted to a Russian sled the Ghost could only reach a top speed of 20km/h but Lenin was happy with it.

Saddam Hussein is something of an anomaly on this list. For he favoured some truly revolting motors.

The Iraqi dictator, like Hitler, had a fondness for Mercedes-Benz, particularly the types used by James Bond villains throughout the 1980s  terrible replica cars and hokey neoclassical vehicles.

For a dictator, Saddam had frankly terrible taste in cars. Btu what does make the dictator stand out is the sheer number of cars he owned  the exact number still unknown but he is thought to have had at least 60 vehicles.

To add to the confusion over Saddam's personal fleet, when US troops took Bahgdad in 2003 and soldiers stormed through Sadaam's main palace, looting took place and Iraqi civilians made off with several of the dictator's vehicles. 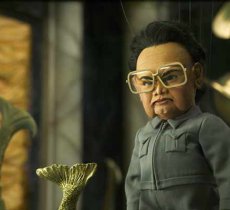 Kim Jong-il, the (fairly) recently departed 'Dear Leader' of North Korea, lived life as a dictator to the full. While his people were in a state of famine, Jong-il reportedly splashed his cash on a high-end luxury lifestyle  cognac, caviar and, of course, cars.

Jong-il was another with a fondness for Mercedes-Benz and is thought to have spent upwards of $20 million on the carmaker's vehicles. Despite his hatred of America, Kim Jong-il's funeral procession in Pyongyang was led by a number of American-made vehicles, most notably several Lincoln limousines.