Religion and its claims are not my problems until and unless they knock on my door and try to run any part of my life.
By Julian I. Taber, Ph.D.
2008-11-06

Religion, depending on faith as it does, requires no evidence for its claims. I do not want to argue with religion's dogma in this column. Religion and its claims are not my problems until and unless they knock on my door and try to run any part of my life.


"
Religion and its claims are not my problems until and unless they knock on my door and try to run any part of my life.
Sadly, that happens often because religious people fall back on authoritarian control when they can't win on logical grounds. If the fanatics would just stay in their churches, if they would keep their religion at home, I would hardly care what they believe, foolish as some of this stuff seems to me. I will not try to dissuade anyone from a belief no matter how weird or unlikely the belief may be (unless, of course, there is potential harm to another individual that needs to be reported to the authorities).


"
Should I try to convince everyone to become an agnostic or atheist? Never.
It's not what the religious people believe that bothers me here in the United States; it's how they go about selling and forcing their ideas to the rest of us.

Should I try to convince everyone to become an agnostic or atheist? Never. Intellectual persuasion, of course, depends on proof, evidence, and logic. These are not the reasons people harbour religious beliefs. Accepting or rejecting a religion is an emotional issue although, to many, it may seem like a logical choice. Intellectual reasoning is worthless in the face of strong and deep ideas based on emotion, so why bother? Religious people don't want facts, they just want to feel good. 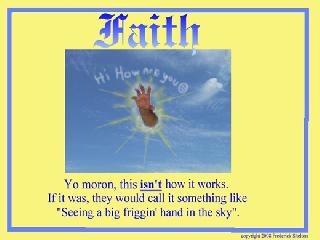 Religious behaviour may offer some worldly benefits for those who are not equipped for intellectual life. In a recent study out of Temple University, involvement with religion actually seemed to decrease the likelihood of depression. Religious participation in various forms may provide a way of coping with anxiety and other emotions as well as offering a sense of community belonging.

Formal church services provide entertainment with music, lectures, and social events. Church membership offers a kind of extended family as well as social services. Religion can draw people into a rich community life if that is what they want, and if they are willing to give lip service to dogma, offer money, and put up with rituals.

A recent paper out of the University of Toronto linked religious beliefs and devotion to a sense of personal control. Participating in religious rituals seemed to enhance a feeling of control over life. These may be magical beliefs, but they seem to work as a kind of shield against the vicissitudes of living.

Religion does not always encourage the study of science, but science has begun to study religion and the reasons people may have for following a religion. Mystical beliefs, myths, and dogma probably have survival value. If a man is hunting down a dangerous animal to feed himself and the tribe, he needs to believe that if the animal wins, perhaps a better life awaits in heaven.

Whatever positive rewards may flow from a religious life, there are secular ways of achieving these same advantages. Many different kinds of social clubs offer an extended family, and they usually have lower overhead costs; church leaders, after all, earn their living running the church, and they can be very highly paid.

Christian fanatics love so-called wedge issues such as intelligent design, abortion, gay marriage, the war on drugs, and death with dignity. We waste our time arguing about issues that are best left for the individual to decide upon, but people love an argument. It sometimes gets violent. Religion seems to be opposed to free choice in the most important issues in life while agnostics, who usually accept a philosophy of determinism, always seem to vote for the right to choose on important question that affect personal life.

(Julian I. Taber, Ph.D. is author of Addictions Anonymous: Outgrowing Addiction with a Universal, Secular Program of Self-Development: ISBN 978-1-60145-647-2)