At some point, one way or another, something else, something neater will be replacing our laptops. But until that happens, why wouldn't we build a mobile-phone sized computer. So that instead of traveling with a laptop you could actually just take with you a phone-like small box that would be three in one - the computer brain, the screen/projector and a keyboard, with an optional one-finger thimble-like mouse on top of your finger that works wireless. The end result would be perfect.

Travelers would love it, everyone on the move and having to work every now and then would love it. It's something many of us have been dreaming of for a long time already.
The technology is there today to build it. But based on what I've found, there's really no such thing out there yet. And I can't honestly understand why. I'm a freakin' journalist, or actually not even that, if not counting the degree, I do stuff for the living that even I can't understand most of the time, the whys and whats. But for real skilled engineers, programmers and designers coming together putting something like this together should not be anything too difficult.

The nice thing about a projecton screen is that you don't really need a wall to see it. It would suffice if you simply went to a cafeteria, took the menu holder, replaced the menu with a big clean paper and project the screen there. In theory, in my mind, it could work perfectly. 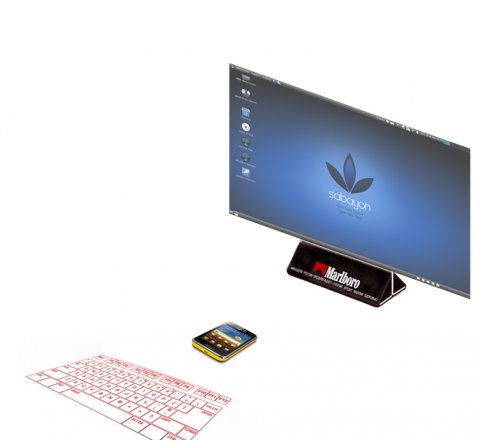 That's how it could look like. Let's call it EIFU, short for....nothing really.

Of course, there are couple of things that might complicate the (commercial) production of such a device.


And where to then?

Obviously, what I've described here would be only the first step. Something that could be created already today but for some reason hasn't. But as the technology advances, the idea is to move on from video projectors to holographic projection.

What do you think about it? Could it be done? And most importantly, why hasn't it been done?