Cloud computing is turning us all into Soviet Russia, claims Steve Wozniak

One of the founding fathers of the mighty Apple has made some pretty controversial statements in the name of social justice in the last few days. In an illuminating CNN interview, Wozniak has condemned the US governments recently exposed collating of data on an unprecedented and arguably unconstitutional scale from its countrys citizens. This interview was made all the more interesting by the fact that Steve Wozniak is one of the most influential figures in the computing world.
By Colin Shearer
2013-07-04
About the author: Colin Shearer blogs for VESK Virtual Desktop. Although he likes Steve Wozniak, he's not a fan of technological determinism, and believes cloud computing has massive potential for promoting freedom and resistance to state control.

One of the founding fathers of the mighty Apple has made some pretty controversial statements in the name of social justice in the last few days. In an illuminating CNN interview, Wozniak has condemned the US government's recently exposed collating of data on an unprecedented and arguably unconstitutional scale from its country's citizens. This interview was made all the more interesting by the fact that Steve Wozniak is one of the most influential figures in the computing world. 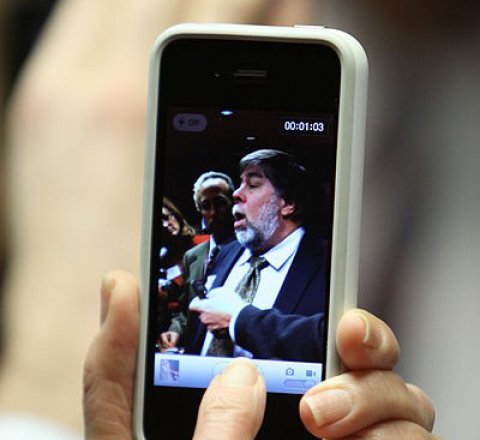 Famous for producing some of the worlds most respected and powerful IT intelligence, Apple as a brand needs no introduction. Wozniak himself is best-known as the mogul who worked alongside Steve Jobs to create the organisation and was behind the first production of Apple Computers, which then helped to shape the iconic Mac laptop. Wozniak is also something of a Nerd King, with television appearances and a pretty cemented cult status and following. Cuddlier and perhaps more endearing than the bigger, brasher Jobs, Steve Wozniak is a pleasant looking guy with one of the world's most innovative brains hiding behind his scruffy beard and spectacles.

His chat with Piers Morgan on CNN was frank and forthright when it turned to discussion of vigilante whistleblower, Edward Snowden. He declared his support for the exiled CIA employee, who called out the overwhelming level of intrusion by the world's leading power into the lives of its people in the apparent name of national security. Comparing the actions of the American government to the KGB spying techniques used on individuals in Soviet Russia, Wozniak described his unease at the facts' of the Snowden unmaskings.

He talked about his admiration for the defector's courage and made reference to Daniel Ellsberg, the leaker who outed papers about Vietnam from within US military behemoth, The Pentagon, in 1971. The Apple inventor also talked at length about how computers are getting more sophisticated and 'human,' with the potential for ever more power and abuse within the wrong hands.

The irony that Wozniak helped to forge the very tools with which the US government observed the lives of millions in total secrecy was not lost during the interview. When directly challenged by Morgan about his indirect role in the ability of administrations, Russian and otherwise to do this, he was open about his feelings of guilt but stopped short of taking responsibility. Wozniak acknowledged that the power wielded in technology has been greatly enhanced by his discoveries and innovations enabling web-based services such as cloud computing, virtual organisation and information sharing. However, he stood firm in expanding the point that this strength was designed to create individual freedom and agency in the flow and ebb of human potential, not to control it.

Wozniak has publically shunned the practice of domestic intelligence gathering on such a gargantuan scale. It is difficult to see how any government can justify the observance of its citizens without rhyme or reason, previous conviction or suspicious motive. With Wozniak speaking out across internet and social media against the mass collecting of personal data, the retweeting, hashtagging, sharing and posting of his refutal can go just as global as anything else. Perhaps the actions of lone voices like Snowdon and Ellsberg can be compounded by the support of technology leaders like Steve Wozniak. One thing is certain, uniting together against intrusion and state control through the medium of computing will become more and more crucial in the years to come.