There are facts evident like the Lascaux caves in France or the ones in Mongolia which date back to Neolithic age showing wrestling events with crowds enjoying it. The caves in Libya also depicts of swimming and archery being taken up by humans around 6000 BC. Japan was also not left behind as it caves paintings giving you the glimpse of sumo wrestling.

Perhaps the ancient humans found more fun in competing with their physical strengths, as there are stone slabs stumbled upon from the Sumerian civilization which show wrestlers dating back to 3000 BC to 2600 BC. You also get one of the first evidences of boxing traced back to the ancient Sumerian civilization. Kings took special interest and showed off their sporting skills of that era. Fishing hooks were also excavated at Ur, giving an indication of angling in Sumer around 2600 BC.

Ritual sporting events were a craze of the ancient Greece, which is evident from the Minoan art dating back to Bronze Age Crete. The fresco paintings of the 1500 BC showing bull leaping and possible bull fighting depending on the way you construe it, gives you insight to the ancient sports. Though sports in ancient Greece, was considered as occupation of the wealthy and royalty who did not indulge in manual labor themselves. Greece takes the credit for instituting sports formally with its first Olympic Games recorded in 776 BC in Olympia. 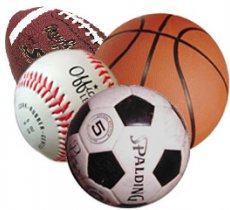 With the evolution of time individual sports was joined in by team sports, and its credit goes to the western culture especially to England, through its British Empire. But Asian countries were not behind with games like polo, various martial arts and variety of football games. European colonialism kept games like cricket, various types of football, and snooker, carom billiards and hockey to the forefront as well. Eventually with coming to age of mass media and global communication, professionalism set in the world of sports, and it further enhanced its popularity.

With the on set of 19th and 20th century, thanks to the influence of British sports, association football made its impression on the world of sports. Its influence was felt in big names like AC Milan, and Athletic Bilbao in Spain, to name a few. Women were also encouraged in the world of sports and 20th century saw male dominant clubs like the Marylebone Cricket Club (MCC) and Leander Rowing Club open their doors for women participation.

Sports are meant to spread friendliness and are great tools to develop good relations among various nations of the world. Hence promote sports and play the game with good sporting spirit.