A weekly look into the world of underappreciated cinema
By Steven Lochran
2005-06-05
Shock & Awe: The Tour 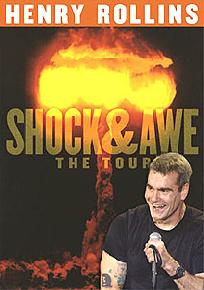 Whenever I ask the question, "Have you heard of Henry Rollins?", I inevitably receive the reply of "No. Who's that?"

How can you distil who Henry Rollins is and what he does? I suppose you could do it in a biographical fashion;

Henry Rollins, born Henry Garfield, grew up in Washington DC, where he worked a number of menial jobs before joining up with seminal punk rock band Black Flag. He recorded and toured with the group for years, until their break-up in the late eighties. Forming his own outfit  appropriately named Rollins Band  Rollins continued to tour and perform, releasing a number of albums but really only ever having one hit single ("Liar").

In addition to his musical credits, Rollins has also worked as an actor, a writer, a publisher and  in a way  a stand-up comedian. His spoken word shows, for which he is renowned, are a brilliant mix of comedy and scathing editorial opinion.

Of course, doing it like that makes it sound like an obituary, doesn't it? I prefer to describe Rollinsand this is going to sound silly, so promise not to laughas a warrior poet. Though he has an overwhelming intensity, it's countered by a sharp wit and a great deal of intelligence. His spoken word shows are not only spastically funny, but are also both intellectually stimulating and challenging.

Shock & Awe was the most recent of Rollins' spoken word tours. I managed to catch it when it rumbled through my town a couple of weeks ago, but this DVD of the show was recorded back in 2004which goes to show you how long he's been touring for. He discusses everything, from his observations about George Dubya to his experiences recording a song with William Shatner, and a lot more in between. 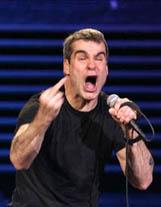 The only real problem  and this is a problem shared by all of Rollins' recorded shows  is that the editor didn't really know what he was doing and always picks the worst moment to cut to a shot of an audience member or something just as irrelevant. Right at the moment Rollins goes into some piece of subtle physical comedy, we'll get lumped with some disturbing shot of a forty-something dude chuckling, or some bizarre crane shot of Rollins filmed from behind. Don't ask me who makes these decisions, I just work here.

Really, it could be any number of Rollins' spoken word DVDs or CDs I could be recommending to you. They're all great, because the guy is a genius, and a fairly unappreciated one at that. So go out, find his stuff, and see for yourself. If you're not quite willing to lay down any money for a DVD just yet, a quick google will give you websites where you can download MP3 samples of his work. And that way, when someone poses the question "Have you heard of Henry Rollins?", you can answer with, "Of course. Dude made me laugh so hard I blew coke out my nose." Or, you know, something like that.

Next week: You got me.