Starring Michael Moore, Roger Smith, many others (as themselves).

Long before he was making documentaries that raked in hundreds of millions of dollars - while also earning people's eternal hatred for making controversial Oscar speeches - Michael Moore was a magazine editor who, over the course of a few years and with the help of some friends, made a documentary about the tragic plight of his hometown; Flint, Michigan.

At the time, the ragtag group didn't realise that the film would go on to have the success it did. Rather, it was a last-ditch effort to try to save their town. Flint was a city that grew strong as one of America's largest auto manufacturers it hosted. Then, in the mid-to-late eighties, the chairman of General Motors  Roger Smith  decided to downsize the business, laying off tens of thousands of workers from Flint alone. The city, having grown almost completely dependant on the work that the plants provided, spiralled into a terrible depression.

Michael Moore grew up in a family full of GM workers, and at the time had friends that were getting laid off from GM plants. Pulling together all the money he had, he made Roger & Me.

From that information, you'd expect Roger & Me to be slapdash and amateurish; an exercise in guerrilla filmmaking that's more about the message rather than the aesthetic. But surprisingly, it's not only a strong effort for a first filmmaker, but it also contains all the stylistic hallmarks of Moore's subsequent films. 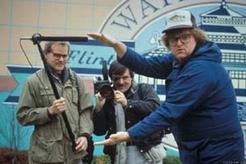 It has a good sense of humour and a keen awareness of pop culture. It uses archival footage as sardonic commentary, juxtaposing 1950s era newsreels about Flint with clips of it in the modern day, underlining the severity of the town's situation. It uses current-affair-news-program-style interview tactics, by showing up on people's doorsteps and grilling them for their opinions. And it has that unshakable feel of bias that all of Moore's critics so harshly attack him for.

Certainly, Moore's films are not always "documentaries" in the strictest sense. There's never any sense of impartiality. Moore always has a point that he's making, and he's always clear as to what it is. The thing that makes his films important, however, is that they work as counter-balance to the spin that network news often puts on things, where important stories are glazed over and bias is evident but never admitted to. At least Moore is honest in his prejudices, and I appreciated that he's out there, doing his thing.

Really went off on a tangent there, didn't I?

Perhaps Roger & Me's strongest aspect is that it was made over the course of three or so years, so the audience is really let in on the impact that the plant closures have on the town. Many attempts are made to pull the town out of its slump, and it's not long before you're watching those attempts go down in flames. It's both a saddening and captivating thing to watch. The sense of doom is pervasive, but through it all, the townspeople never give up trying.

Though he's proud of the film, Moore has often remarked how he feels that it was something of a failure. He and his friends started making it in the hopes of saving their town by bringing attention to its troubles. Sadly, that didn't work out, as Flint is now in a worse state of affairs than when the movie was made, with even more employees having been laid off in intervening years.

But while it may be a sore point for Moore, Roger & Me is still a film that captivates one's attention and creates a genuine sense of empathy in the viewer. Though it has its fun moments, it's not always an easy film to watch. It's certainly, however, an important film to watch.