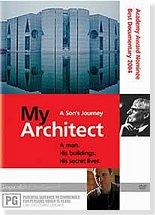 My Architect is an account of a son's desire to learn more about his famous father - and the flawed life that lead to his own existence.

Nathaniel Kahn is the son of an Estonian immigrant and eminent Philadelphia architect and professor Louis (Lou) I. Kahn. Nathaniel seeks to learn of his father's life and the mysteries of how he managed a career and three separate families, living within a few miles of each other.

I sat in my living room hoping for a museum-style ride through famous buildings, but I was not prepared for the emotional treat as well.

Nathaniel was 11 when Lou Kahn was found dead from a heart attack, penniless and alone, in Penn Station, New York, in 1974. The address of his passport was scratched out, leading Nathaniel's mother to speculate that Lou was coming back to live with them. Nathaniel knew little about his two half-siblings and the mothers, but Anne Tyng, former employee and mother of Lou's second child Alice, believes they are all connected somehow. Lou managed a busy late-blooming career and three separate relationships: some friends and colleagues didnt even know he was married.

It is clear that Nathaniel wants us to appreciate Lous work, but it is impossible to separate the frantic and splayed personal life that was Lous unlikely nourishment. Tethered to his work, Lou made it known that domestic affairs were secondary, as he advised Anne that she would just have to be " ... philosophical about these things," condemning her to single-parenthood in an unsympathetic era. Nathaniel's own mother endured a similar sentence, with similar platitudes.

Nathaniel takes us on a journey around the world to see buildings that formed the body of work in Lou's lifetime. We are treated to interviews with prominent architects including Philip Johnson and I.M. Pei, collecting flattering quotes of dedication and artistry. From early work on the Yale Art Gallery to the Salk Institute, the work is raw and strong, reflecting Lou's desire for buildings that can stand as "enduring monuments", as stated by friend Vincent Scully.

The latter part of the film shows us some eclectic works: a floating amphitheatre, designed from the Book of Crazy Boats drawing Lou gave to a very young Nathaniel; and his final masterpiece the 'Capital of Bangladesh' buildings. Interviews with the custodians of both pieces are tearful in their recollections of the man, the friend - the architect.

For all the answers Nathaniel has collected, the story is not over; there is closure but the book is not closed. There are many things Nathaniel now finds wonderous, and best expressed by his father:

"How accidental our existences are ... how full of influence by circumstance."

This documentary is a quiet, pensive work - as calm and measured as both the son and the father. There is much to enjoy. Louis Kahn's life and work is projected as a celebration; although more like an afternoon tea than a party.