Masterpiece Cinema - The Transformers: The Movie

The Transformers: The Movie Starring the voices of Judd Nelson, Leonard Nimoy, Robert Stack, Eric Idle, Orson Welles, Peter Cullen and Frank Welker, amongst many, many others.

Now those of you who were kids in the 80s know exactly what I'm talking about. The Transformers was a phenomenon unlike any otherwell, okay, they were a phenomenon like all others, in that they swept kids up into a whirlwind frenzy of consumerism and unhealthy obsession. And I was one of those kids. I was also a He-Man kid, a Thundercats kid and a Teenage Mutant Ninja Turtles kid. You get the idea.

But The Transformers always had something that those other childhood fascinations didn't. It had a movie that held my interest and inspired my imagination. It had a movie in which really big, dramatic things happened. It had a moviethat bombed really terribly.

Why is that, though? You would think with a property as high profile as The Transformers that a movie would be a sure fire hit, right? Probably the best reason for the film's failure is the dark tone it had, which stood in contrast to the light, frivolous personality of the television series. Many beloved characters from the show were killed off in the film, with some of their deaths being nothing more than ghastly afterthoughts. But of course, if there's one death you remember from The Transformers: The Movie, it's the death of Optimus Prime. 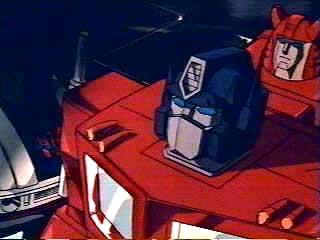 For those of you who haven't seen the show, here's a brief recap; millions of years ago, two warring factions of alien robots  the Autobots and the Decepticons  crash-landed on Earth after an epic space battle. They lay dormant under a volcano for many millennia, until finally the ship's onboard computer came back online and revived them all. It also scanned the local area, worked out the specifications for a number of vehicles, and reconstructed both the Autobots and Decepticons to allow them to transform into Earth style vehicles. It's all quite silly, really, but that's what suspension of disbelief is all about.

Anyway, now fully revived and remodelled, the Autobots and Decepticons begin their war anew on Earth, with the Decepticons determined to strip the planet of its resources so they can have enough fuel to return home, while the Autobots befriend and protect the human populace.

Characterising the Autobots was their leader. With the ability to transform into a big rig truck, Optimus was huge and imposing, but was a compassionate idealist who believed in freedom being "the right of all sentient beings". He was essentially the Superman of the Transformers universe  if you gave Superman a bit more of a John Wayne demeanour  and was especially loved by all the kids that watched the show.

So when he was killed off in the first fifteen minutes of the film, you can just imagine the trauma it caused all those kids in the cinemas. You can also imagine how much they resented, who was to step into Optimus' role as leader of the Autobots and was re-dubbed  without a hint of irony  Rodimus Prime.

Personally, I love the whole movie, in fact. Never mind that there's the occasional animation or continuity flub. Never mind that characters are introduced without proper explanation of their background or motivations. Never mind that the whole thing is essentially a cynical, 80-minute toy commercial. Because in my mind  and in the minds of many kids of the 80s  this is high drama. This is Shakespearean level tragedy, operatic style turmoil, with dialogue that's dripping with epic power. And if that's not enough, it was also the last film that both Orson Welles and Scatman Crothers made before their respective deaths. A tragedy in the eyes of Welles' fans, but a point of pride for many Transformer loyalists. Yeah, I know, that's kinda sickbut it's also the truth.

Cut to the present, where a live action Transformers is rapidly in development. It's being executive produced by Steven Spielberg and produced by Tom De Santo, the guy who helped bring The X-Men to the big screen. I believe I've even heard that Robert Zemeckis is attached to direct. These are all good things, of course, but my one hope is that this new film is as daring as the 1986 animated film was. It may not have been good, per se, but it took some real chances, and that makes it great in my eyes, and that's why I recommend it.

I mean, I certainly recommend it more than the revived Transformers cartoonArmada or Energon or whatever it's called. Talk about your pieces of crap

Next week: No idea! Join me then!