Genre: Drama (There are so many End of the World' movies now that, like football movies and high school movies, they deserve their own section at Blockbuster)

Now here's a modern classic that very few people have seen, or even heard of (at least in the circles in which I run). Written and directed by Canadian auteur Don McKellar, Last Night is all about the end of the world.

Unlike most films that tackle this subject, Last Night deals with the subject manner in a very realistic, subdued way. There's no Bruce Willis action figure tie-in, there's no alien bug monsters, there's no Stephen King-esque super flu. In fact, we're never even definitively told what kind of doom is impending 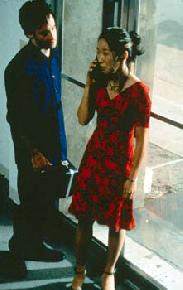 (though the light in the sky implies fairly heavily that either a meteor's about to hit or the sun's going to explode. Both Very Bad Things to be happening).

Writer/director McKellar stars as Patrick Wheeler, a guy who's hoping he can get through the tears and tediousness of his family's final ever get-together before he can go off and die the way he wants to  with a nice bottle of wine and the stereo playing a favourite song.

At the same time, Sandra (played by Sandra Oh, now of Sideways fame), is trying to get across town so that she and her husband can also die the way they want to  by committing mutual suicide.

Patrick's best friend, Alex, has hauled himself up in his apartment during the final hours of the human race, making his way through his To Do' list  the things he always wanted to do sexually but never had the chance, or guts, to do. This includes having sex with a black woman, his high school French teacher, and a virgin, amongst many others.

These are only three of the many stories that are told throughout this tense piece of cinema, and it's not long before all the characters' lives are interweaving, each of them near desperation point as the end of the world grows ever closer.

Sounds kind of depressing, doesn't it? And it is. But it's still an incredibly great movie to watch. It really grabs you and doesn't let you go, leaving you breathless and heartbroken at the end. It's a story told with sensitivity and ability, and stars some great Canadian talent (including Sarah Polley from Go and the recent Dawn of the Dead remake, as well as infamous director David Cronenberg, who worked with McKellar again later on in eXistenZ).

And hey, McKellar's appeared on Degrassi: The Next Generation, as the butthole fiancé of old school character Caitlin Ryan. Anyone that cool is well deserving of your video rental dollars. If they ever release it down here in Australia on DVD, you can bet I'll be adding it to my collection. I highly recommend you do the same.

Next Week: As promised; love in the time of movie monster prosthetics