Released in 1995 just as Jason Priestley's 90210 fame was starting to die out, Coldblooded is an often-misunderstood black comedy about a young man, Cosmo, who lives in the basement of a retirement home and works for the mob as a bookie. When his boss dies and a replacement steps in, Cosmo is promoted to hitman. He's introduced to Steve, a seasoned hitman tasked with mentoring Cosmo. At the same time, Cosmo meets Jasmine, a yoga instructor who works at the local gym. With these two changes having suddenly taken place in his life, Cosmo realizes that he's been living in a rut for a long while, and resolves to get out of the business' and make a new life with Jasmine. 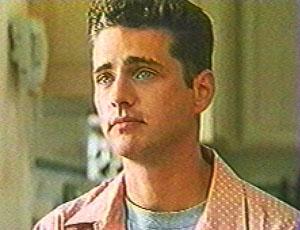 The biggest complaint I often hear about Coldblooded (perplexingly renamed The Reluctant Hitman down here in Australia) is Jason Priestley's performance. People charge him with being wooden', or boring', or whatever. But that's the entire point of his character.

Cosmo is essentially borderline autistic. It's as if he's discovering things in life for the very first time in each and every scene. That's what makes him so good at his job; though he feels a certain degree of guilt over killing people to start with, it's not long before that fades away and he views it as nothing more than a mechanical process. It's quite obvious that he's not a normal person. Perhaps the best example of this is a subtle one; Cosmo has no body language. He tends to stand awkwardly straight, walking without moving his arms and never registering any emotion. The few times he does take on more human gestures is when he's mimicking the person that he's talking to. The audience's attention is never drawn to this. It isn't lingered on, nor discussed. It's simply a small thing that Priestley does in his performance that demonstrates that, while he's playing a flat character, it's not because he's a bad actor. It's because that's how the character's supposed to be played.

I suppose it can be fairly easy to mistake this film for something it's not. Some people watching it might not get that it's meant to be a comedy, let alone a black comedy. It's very much like a Tarantino film, without the insanely high level of energy or constant barrage of pop culture references. Instead, it's a quirky, daring film that doesn't make the same, safe choices that a lot of films do, and is as a result an absolute delight to watch.

Next week: Love in the time of movie monster prosthetics.