Written by Michael Mann (based on the book by Thomas Harris).

So a couple of years ago I went with some friends to see Red Dragon, the latest film to be made of Thomas Harris' books that feature the infamous serial killer, Hannibal Lecter. Red Dragon was the first book written in the series, and features Lecter in nothing more than a supporting role (though his presence casts a long shadow over all the other characters, especially the protagonist, FBI consultant Will Graham).

I've always found the Lecter character  especially that of the books  to be fascinating. Creepy, I know. I was eight years old when the film version of Silence of the Lambs came out, so in my mind, Lecter has always been defined by Anthony Hopkins. How thrilling it was then that Hopkins was teamed with one my favourite actors, Edward Norton, to bring Red Dragon to the screen.

And unlike many critics, I actually really enjoyed the film. I found it a smart and faithful adaptation that modernized the story without betraying it. I found that Norton gave an insightful and understated performance as Will Graham, and that Hopkins managed to bring something new to the table as Lecter while still maintaining the character he'd developed in the previous films.

I'd heard of Manhunter years previously, but had never run across a copy of it to watch for myself. Manhunter, the first film to be made from the book Red Dragon, was produced in 1986 with Michael Mann both writing and directing. I'd heard nothing but good things about Manhunter (renamed for fear of flopping, like 1985's Year of the Dragon). I'd heard that it was superior to all previous Harris adaptations, that Brian Cox truly brought Hannibal Lector to life whereas Hopkins was simply overacting, and that Mann's sense of visual style was magical.

Finally, thanks to Red Dragon, Manhunter got released on DVD, and I got to see it for myself.

I'll say it now; I've never been a fan of Michael Mann's films/television work. Miami Vice is such an outdated icon of the 80s now that it's hard to take it seriously. I thought Heat was a meandering, self-indulgent waste of time, and that Collateral was an over-rated B-thriller that had some nice performances in it, but not much else.

I just don't get the attraction to Mann's films. He seems to have this weird hold on middle-aged male film reviewers, though. They salivate over his work and the complexities of it, its bold visual style and its blah, blah, blah. This love, for whatever reason, extends to Manhunter. Which I just. Do Not. Get. 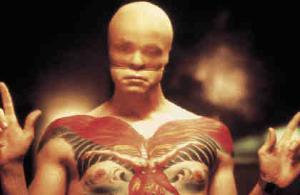 The malevolent serial killer 'Red Dragon'. With pantyhose on head.

The malevolent serial killer 'Red Dragon'. With pantyhose on head.

The acting is horribly stilted. It's like all the actors are doing a line-reading on a Sunday after a really big night out. The three worst offenders are William Petersen (he of CSI fame) as Will Graham, Tom Noonan as Francis Dollarhyde (aka the Red Dragon) and Brian Cox as Lecter.

Petersen stumbles through his role, mistaking constipated scowling' for brooding', and every now and then delivering hackneyed monologues to himself where he habitually mumbles the words bastard' and son-of-a-bitch'. Noonan, as the serial killer that Graham is in pursuit of, is a joke. The complex motivations he has in the novel are stripped away in this, to the point where the character goes from being a malevolent yet pathetic monster to nothing more than a sissy with a pair of pantyhose on his head.

Brian Cox, for all the acclaim he's garnered for his role in this, is in the film for no more than five minutes (though it's a fairly accurate reflection of Lector's level of participation in the book). Cox takes his interpretation of the character in the exact opposite direction that Hopkins did, depicting Lecter (or as his name is perplexingly spelt in this, Lecktor) as slovenly and detached to the point of boredom. For whatever reason, Mann decided to set Lecter's scenes in a pristine, white cell. I suppose it was meant to be menacing in a subversive kind of way, but it's no scarier than going to chill out with the maintenance guy on his lunchbreak. Wait, I take that back. Most maintenance guys tend to be a little scary. Brian Cox is not. Neither is his antiseptic little closet-prison.

As for the climax to the whole endeavour, wellthe detailed, rich ending of the book (and, to a certain degree, the 2002 film) is replaced with a heroic' jump through a window and a simple shoot-out. I can't express the overwhelming sense of lame' that the ending brings with it. It's like Mann got to a certain point in the filmmaking process, so he thought "How can I make this as inexpensive and as quick-to-shoot as possible?". Congratulations, Mann. You managed it. You hack.

I could go on forever about this movie's utter awfulness (I haven't even started on its stilted filmic aesthetic) but I'm already way over word-count. So let me leave you with this; if you're interested in checking out the world of Hannibal Lecter for yourself, read the books. Then watch the Hopkins films (perhaps starting with Red Dragon, so it's in order of story progression) and compare them for yourselves. Skip Manhunter. You'll be glad you did.

Next week: A return to films that are fun to watch.